Think Ethanol is Environmentally
Friendly? Get the Real Story! 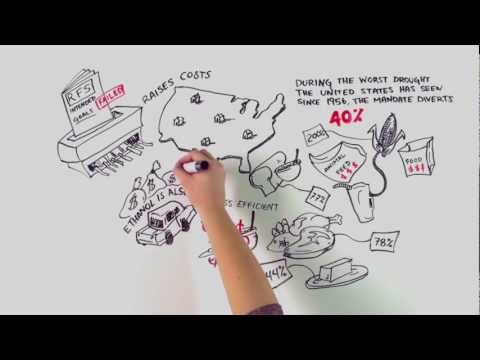 So if I use scrap wood from my saw mill or any other project to fuel my vehicle in lieu of gasoline where would I fit into the above?

Also consider if I wasn’t using the scrap to fuel my vehicles I would need to buy fuel to put in my vehicles to haul and dispose of the scrap.

I wish the renewable fuel standard would do a study on gasifiers fuel from waste materials.

Yes I know we are just a very small percentage. I know we are not smarter than the rest of the world. Could it be we are independent and down right stubborn!

Down right stubborn! And resourceful, too.

Don’t sell yourself short Wayne!
By eliminating 90% of your (our) dependency on a nonrenewable/toxic/dangerous/expensive/labor intensive/ and politically volatile fuel source, you have become 90% smarter than the big brains that pulled all of us down into this mess of “Big Oil dependency”!
I also can’t wait to put a bumper sticker on my Dakota that I saw on Mike LaRosa’s gasser… “Unbloodied Fuel Only” This alone is enough reason to try ANYTHING to get out from under the oily thumb.
I am proud to be a part of this undercurrent, we aren’t going to just turn heads…we’re going to snap necks !

And common sense smarter then the average politician / lawmaker. .

Am I mistaken? or did the smart politicians and lawmakers retire shortly after the revolution?

Corn is the wrong crop to use for ethanol. There are so many other options available to produce ethanol, other than corn. Ethanol is not the problem its the system we have already established to produce it. It made sense when we had a surplus of corn years ago, but this is not the case today and the video is 100% correct in all of its content. Look at Brazil its working for them, also check out David Bloom he has a very strong argument.

BTW I am looking into have the machines lab tested. I have been in contact with a few universities and they have shown interest in helping us. I want to further develop our product line though before this happens.

Yes that is one the most productive crops pr acre you can get. Switch grass is another and can be grown just about any where in any climate.

Am I missing something?

While out traveling (on Wood) I snapped a pic of some folks braving the cold, selling wood (in their words) for a little gas money.
I know the people selling the wood and it is about a 30 mile round trip to this parking area. If they sell the wood ( most of the time they don’t ) they may have to drive another 15-20 miles to deliver and stack. At the end of the day while I was out DOW I met two trucks headed back home with their full load. They will unload and try again the next cold day to sell.

The price they ask for the wood (if they were able to sale) would come close to filling their gasoline tank.

(Sell the wood, buy the gasoline with a lot of tax piled on, the money goes to the Middle East to support a lot of things I am not in favor of, the fossil fuels are transported half way around the world etc, etc.)

I think the people reading this would favor bypassing all the above and using the load of wood in their truck and drive near a thousand miles. I just hope we can keep flying under the radar so that DOW stays legal and unregulated. As long as there are few enough of us to not cut significantly into the DINO corporation’s profits, we’ll be safe. But, the day may come when Wayne has to hide his wood chunker down by the creek to avoid the “revenue-ers”, and that police officer at the restaurant will not only NOTICE his truck burning wood, he’ll be LOOKING for it.

“We know what you’ve been doing, Mr. Keith”.

I agree with what SteveU has to say in general…being in a little country down in the south pacific there are some differences but on the whole…not a lot.

the Left and Right of the political spectrum have got more and more extreme in the last 25 years here…lol they used to squabble over the ground in the middle, now they are so far apart they are right out of the park and its not doing either side or the rest of the country any good…we used to have a completely government funded public health system that was the best in the world…on average for every 1 dollar spent on administration it spent 17 on clinical services…compared to the USA (private systems) average of 1 to 4…it even made the best system in europe’s (Norway) 1 to 9 ratio look amature…it got destroyed in one parlimentery term about the time i started highschool…my mother is a surgical nurse who has worked in aussie, england,usa and canada and of course new zealand and saw it all from the coalface so to speak

we now have a couple of urban areas that are basictly home heating burn ban areas…you can still burn wood there if you comply with their emissions rules…and the only wood burners capable of achieving those are around the 10 grand mark…and who’s going to pay that when a heatpump is only about $4k?..oh yeah and the councils who implimented those rules have also shares in the power companys…“but there is no comflict of interest’s…the emmission’s rule are a public health issue”…yeah right, pull the other one…its got bells on

it sort of remindes me of the 1930’s political extreme’s and thats without the religious extreme’s that the islamic and christian are going to…being from a a patently non religious country and personal background thats as or even more alarming than the political extremes.

I’ve lived in Arkansas for 40 years now. Years ago the license plate used to say “Land of opportunity”. I always liked that, and still believe it’s true although now it says “The Natural state”. Also true. In most of these rural areas, an individual can do whatever they want. Just don’t burn during a super dry burn ban. Water, wild life, wood, diamonds, aluminum ore, oil, coal, natural gas, and land is readily available, and the trees eat all the excess carbon, and the people are the best. On the news the other night they said 10% of the state population has a hunting license, that’s 300,000. Not a bad militia if needed. You’re all invited to one of the best places on earth to live and work with minimal interference. Let’s hope it stays that way.

Bolivia: Evo Morales' "Manifesto of the Island of the Sun"

Evo Morales, the president of Bolivia gave a speech calling for a more sustainable and just future.

It was given by the Bolivian president on their summer solstice a few weeks ago … Note what he says about “green” stuff. Green like the Dollar.
Regards, Mike

Thanks for posting that Mike!
On a different note, regarding our renewable resource of wood/ forests. Be it for heat, biomass energy, construction or recreation. Things are whacked up here.
Here in WA state, the state land is controlled by DNR. They have an iron fist when it comes to citizens using public land. They are on a closed gate agenda to prevent us from “destroying” all the natural resources.
Firewood cutting is by permit…maybe. You can’t salvage wood from the slash piles, they prefer to burn it. You can’t ride motorcycles on trails that have been in place since the first logging (1880’s). The ORV parks are falling into disrepair because the state parks board has pilfered the funds we paid in (orv license tabs) for maintenance… to the tune of $9 million in 2010. We sued them and got $7 million back !!!
Yet, when I do get out into the clearcuts and look at how they’re managed, I get outraged!
They waste all of the “unmarketable” timber in slash piles. They do not replant trees…never! Unless it is in plain view of a highway. I have seen more than 4 major landslides just in Whatcom county.
One was a direct result of mismanaged logging and it dammed up Racehorse creek, the water level rose in the canyon 70 feet…yes 70 feet. When it let loose, it scoured the canyon and deposited tons of silt into a major salmon river. (the very reason they cited to keep motorcycles off the trails)
They do not manage the land, they take the money from the logging companies and spend it where?
Sorry to rant, I just don’t see the sustainability of forestry in WA. It’s like they are letting it go to sh%t so they can shut down all the backroads because “we” destroyed the forest.
Luckily, the wife and I have a good friend in his 80’s who periodically harvests his land and we get all his slash piles, 10 years worth of wood at the least.
It’s time for change in the evergreen state, DNR means “do not recreate” " do not replant" " do not ride" here!
Tim

Tim, They are probably leaving wide areas open so the folks there can grow weed :o) … That will probably be the new state crop ??? They will start marketing vitamin M milk there instead of vitamin D (for dope). I had a professor back in 72 that was from Pakistan. We went out to eat one night and he told me about one time when he was sick as a little kid, his mother went out and picked a bunch of buds and heated them up in some milk and then poured the milk off. He drank the milk and remembers sitting there and then things started to spin and he fell over and fell asleep. He remembered it with fondness.
Around here in hardwood country, the DNR will do spring burns on some of their (our) lands. The idea is to thin things back to the native species of mostly oaks that are somewhat fire resistant. This is also why I rarely use oak for truck power but I burn mostly oak in the house stove as it burns slow … Mike

Haha Mike, poor kid was never the same.
If it weren’t for the continual wet around here, the hydroponic shops would be out of business.
We manage a 70 acre blueberry farm but are considering growing textile hemp on 4 acres of scrub. Then the feds would come by to claim it.
Regarding the laws just passed here in WA, gay marriage and weed, it brought to fruition a biblical quote from Leviticus, “A man who lays with another man must be stoned” OK, that’s it, I promise.

Regarding the laws just passed here in WA, gay marriage and weed, it brought to fruition a biblical quote from Leviticus, “A man who lays with another man must be stoned” OK, that’s it, I promise.

Hahahaha…i must remember that one…we are going thru the same gay marriage thing at the moment and the legalise pot brigade are making noises about the next election.