Running a generator with my Dodge Dakota

Lately I have been researching ways that I can be less reliant on the power grid by generating some power and storing it in batteries to be used later with a power inverter. Solar panels are still too expensive for me, and I live in a wooded area so there is no good place to put them anyways. Then, I started thinking about ways to use woodgas to power a generator. Based on what I have seen posted here it’s not ideal to try to use a woodgas powered genset to generate AC power directly while maintaining 60Hz due to the change in generator RPM as the load and gasifier production changes.
As I have also seen posted here a better way seems to be to spin a AC generator, then rectify it to DC for battery charging and use with an inverter. Since I already have a woodgas powered truck, rather than build a completely new power system I was thinking maybe I could mount the generator under the hood of my truck maybe in place of the stock 12V Alternator or the A/C Compressor?

Specs are: 48 Volts, 6500 Watts Continuous duty which is probably more than I need but I would rather oversize than undersize. I do question whether the 16HP or so needed to spin the generator at that output could be transmitted by the existing serpentine belt on the truck without slipping and squeaking so I am hoping that some of you with experience with this type of application can offer some advice on whether this would be feasible or not.

Rectifying the generator’s 3-phase AC over to DC is no problem with a full wave bridge, but I’m not sure what kind of charge controller I can use that will allow the batteries to charge properly while they are under a load from the inverter. I looked at the specs on some solar charge controllers but didn’t see any that could handle the kind of current that would be needed in a worst case scenario if the batteries were low and charging while connected to a heavy load from the inverter.
I’m hoping that some of you here with experience on this can offer some advice on a charge controller that would work in this application so please let me know if you have any ideas.

If I can afford it I would like to have a big lead acid battery bank, maybe something like 48 Volts, 600 AH connected to an 6000 or 8000 Watt Pure Sine Wave Inverter. My average daily electrical load is small, if I don’t add the air conditioning or clothes dryer to the load I think the batteries would return to full charge in 2 hours or less if charged every day based on my calculations.

Ideas, advice, and suggestions regarding the feasibility of this project would really be appreciated!

Larry, I sort of do that only with a regular 5500 watt genset running on woodgas off from the filter barrel on my Geo Tracker. You could have a dedicated engine running car alternator (s) belt drive to charge batteries also. 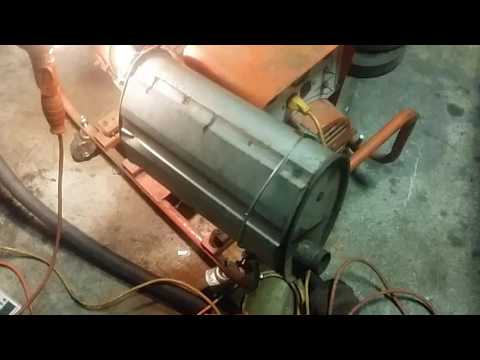 Hi Don,
Thanks for the video, I like that big muffler you put on your generator!
Have you ever checked to see how close the frequency stays to the target of 60 cycles when the load changes from light to heavy while running on woodgas? What you are doing would probably be ok for running power tools and such but I would have concerns that things like the refrigerator compressor, computer power supply and LCD TV might be damaged if there was too much change in line frequency.

larry just use a high amp alternator no need to be so complicated you just need to charge batteries .