Hello - we’re new here. We are buying a sawmill business. It’s a bandsaw setup with a small gasoline engine. We were kind of thinking about converting it to solar but now we’re looking at the wood gas instead. We have a couple of old pickups sitting around doing nothing - should we convert one to wood gas and use it to run the sawmill when we need it? That way we could use the pickup when we aren’t using the mill. Anyone doing this already? If so, would love to see pictures. We also have two Superduty one-tons, a 1 1/2 ton truck and a 2 ton - can these run on wood gas? Would they still have enough power to haul loads? We can get trees/hay/etc. for fuel. We also have some trees on our 40 acres. Thinking some of the gum trees would be good for this…leave the oak/pine/hickory/etc. to grow…thanks for any input.

clarence, dosent sound like a bad idea. BUT keep in mind you will lose about 25-30% power on wood gas. so i would sugesst getting as large an engine as you can on that sawmill. second Wayne’s design is one of the best out there but there is a limit to the turn down ratio. you can have a gassifier that will run your truck down the road with your mill all day long but when you put a low demand on it like running a small engine you run the risk of pluging the gasifier and making tar turning that nice new engine into a paper weight.and vice versa, you could run the saw mill just fine but overheat the gasifier trying to drive on the hiway.

check wayne’s youtube channel the is a vid of i think Mike La Rossa (sorry if im wrong) running a gas generator and electric grinder off the gasifier on Wayne’s F250 that he sold recently.

So yes it is possible but you will have to comprimise. gasifiers are not a one size fits all deal.

also keep in mind if you run a portable mill how are you going to transport your fuel/mill waste, how much extra weight is that? can I pull that with the reduced power from my truck, how will i have to tune the gasifier to accomadate that and how will that affect running the engine on the sawmill.

Yes it can be done, but Eric is right, you will want to optimize the gasifier for one or the other. However Wayne has run generators for extended periods from his truck unit without issue. I don’t think it will make any tar, his units don’t often do that. The prolonged slow speed might lead to the gasifier plugging - so you’d need to hop in the truck and shake things loose. Not such a bad deal.

The sawmill will produce plenty of slabs for chunking into fuel. Sounds like a good setup you have there.

I don’t know if this will help you in your decision but thought I’d tell you what i plan to do with the similar idea.
I’m new to building a gasifier but have been researching it for about 5 years and it’s time for me to get started. I think it would be nice to run all my equipment and trucks on woodgas. Since my daily truck burns a bigger whole in my wallet I will be building for it first and designed specifically for my truck. I was thinking the best thing for me would be to make a smaller type gasifier for my smaller equipment that I can use anywhere on my property on any of my equipment. I think the way I am going to do this is build a gasifier on the front of my riding lawnmower. That way I can mow without having to drag a trailer, (if gasifier was built on trailer), and if I need it to run my sawmill, welder, generator, etc… I can pull up close to it, connect to it and run it. I don’t know if you have a mill were the engine stays stationary with the frame (doubt it) or if its attached to the carriage like mine. (truly don’t know much about sawmills, I have only seen 2 and after building mine). I think you say it’s a Bandsaw mill. I have built my own bandsaw sawmill (firm believer in why buy something when you can build it cheaper). The only problem I can foresee is a way to connect a stationary/portable gasifier to a moving carriage. I think I will be welding a pole to the front of my mill and attaching a flexible hose set-up kind of like a gas pump hose that extends the length of the mill and will retract back after cuts are made.
I am not experienced in gasification YET!!!, so hopefully you and I get some good suggestion from someone who knows more. Good luck on your choices either way.

Lawnmower Gasifier, I think Terry Grzyb might be a site member seen this video on driveonwood.com before: 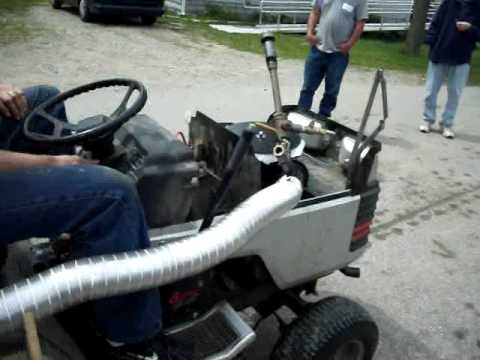 Anthony, that sounds like pretty good idea just keep in mind Chris has had problems with flex hose colapsing under engine vaccum, though with a small engine that may not be an issue. see there i go again with other little problems to keep in mind.

I’m trying to figure a way to run my chainsaw mill off woodgas. then i could make a carrige type deal that could mount on the side of a regular trailer thus solving both deilemas, weight and cargo capacity, however i would sacrifice milling speed. but i would not be doing this as a source of income per say.

You can figure about 50% power out of those 18 hp twins if running on wood. That’s what we get out of our Onan. A 4cylinder or 6 cylinder setup like Wayne’s saw mill would so the trick.

We all up size the engine to make up for the loss of power on wood.

Either way will work, but I thought you had a gasoline engine bandsaw? Running that directly on woodgas will work fine. Like Woody says, it’s best to derate the engine by 50%.

Hey Clarence answer to this depends on two basic underlaying questions:
What quality of saw cut do you need for your market? The less engine cylinders with the less power the more you are going to have a saw marked cut.
Many Amish complained about this and had to up from very simple fuel efficient single cylinder diesels to three and four cylinder engines. Yes more of a circular blade problem but shows up as a having to reduce feed speed problem on a band mill.
Electric motor drive bypasses this problem.
But much more complex to set up a woodgasser system to keep Nazi locked stepped AC generating good enough quality of AC to keep a big AC motor happy not overheating burning up. Be another two step of energy conversion loss between the engine and your blade. More woodfuel to have to chunk up and handle.
2nd question is do you have a real other usable need for that much AC power generation?? For a reasonably sized, weight, cost electric motor you will have to go with three phase motor and then three phase AC generation. US and Canadian home use AC is always single phase. Lots of $$$$ alligators in the swamp going with an AC mill off the nice easy mail the check off every month Grid.

Woodgasing a sawmill Woody is correct just figure on 2X up sizing the engine.
You are probably a engine/drive head/band assembly moving carrage system. eh?
Gonna wanna keep the weight down for transportation and usage. Upsize to a minimum $$$$ 24-30 HP Kohler/Kawasaki V-Twin.
Mr Wayne’s is a fixed/stationary engine/power/blade set up so weight here is not a limitation. His moving carriage moves the log into the band blade. Apples and oranges comparing.

Eric, Is your chainsaw mill run by a 2-cycle chainsaw or have you set up a 4-cycle engine to power the chain mill? A fella here set up one with a 10 HP B&S and said it outlasted 10 chainsaws and would cut beams all day long.

Jim, my chain saw mill is 2 stroke its a husquvarna 272XP, its a portable type right now, I had thought about a 4stroke engine but the idea right now is to keep it portable. sorry Clarence not trying to hijack your thread.