This is a topic which was being mulled around at work over lunch break. It’s a technique that I know all to well and after searching the DOW site and finding nothing on it I thought I would share the wealth.

OK, basics Physics lesson first. The electrolysis of water is nothing more than passing a current between two plates submersed in water. Through black magic and sorcery, bubbles appear on the metal plates. These are pure hydrogen gas on the positive and oxygen on the negative. The water is turned into its component gasses. For a good lesson and brilliant diagram, click below;

Separate Hydrogen and Oxygen From Water Through Electrolysis

Separate Hydrogen and Oxygen From Water Through Electrolysis: Electrolysis a method of separating elements by pushing an electric current through a compound. It is used in various industrial applications such as removing copper from its ore. It is...

This is a great process. You can make hydrogen for your fuel cell car at home, make a thermal lance which should burn underwater, or exploit the side effect…

As hydrogen pours off the metal attached to the positive DC source, it corrodes, due to the free oxygen atoms available after the process. As oxygen fizzles off the metal attached to the negative of the DC source, due to the free oxygen atoms drifting off, the oxygen is pulled from the metal. This is the delightful side effect of rust removal! I could witter on about the process a little more, and knowing my luck have my facts scrutinized by a real Physics Boff, but I won’t. Instead I offer a link to instructables showing a delightful home brew rust removal setup and some before and after pictures. 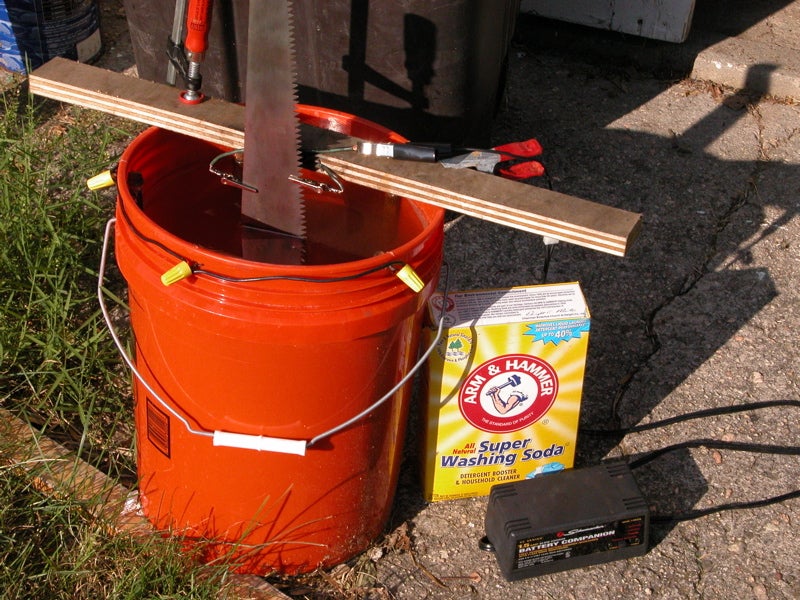 Electrolytic Rust Removal Aka Magic: This is a relatively simple, safe and cheap way to remove light or heavy rust from any ferrous object. I used this process to restore an old wood plane that I bought for $1 (it looked totally un-usable because of...

Great technique. Another one I’d love to try sometime is real low-tech, just soak the metal in a molasses bath!

Vinegar will apparently do the same thing.

Chris: Are you sure about the vinegar? Vinegar is an acid and tries to eat into the metal (by causing rust). Take a piece of mild steel and sand/grind a largish patch of clean metal on it. “Paint” on some vinegar on 1/2 of it and let it sit overnight. My guess is that the vinegar side will have a heavy coat of surface rust with the bare (control) side being about the same as before.

Acid works both ways. If you submerge rusty steel in mild acid (ie molasses or vinegar) and keep the oxygen off, it will eat through the rust. If you expose the metal to lots of air and add acid, it will accelerate the rust.

I plan to try it. I’ll post some pics.

I have used the molasses bath many times to remove rust. Mix 9 parts water with 1 part molasses.
I use the bulk molasses, liquid not powered, from the feed mill. Light rust is removed in 24 hours, heavy rust
may take weeks.

I have a hard time understanding what molasses is. Isn’t it the sirup you make of sugar beets or sugar cane?
If yes, how do you apply that to rusted metal?

Yes, the kind you put in animal feed.
Soak the parts in it, A bucket, barrel or make a bath.
http://www.hotrodders.com/forum/rust-removal-miracle-molasses-204391.html

For tools and small parts one of the spot sanding works good. I got some 1-2-3 blocks that had some rusty spots. The pen got the rust out of the pits and all without messing them up.

thank you for the quick response!

I know those glass fiber pencils, but I have never heard of the “molasses rust removal method”. Cool and good to know!
You live and learn! I tried to find a translation of a German saying (old as a house or old as a cow…) for this. But it doesn’t rhyme or make sense in English, so I will put up this:

Whether an old sage or an ancient fool,
no one can escape life’s eternal school!

Even if you are old and tough,
you (just) never know enough!

If you are not already tired of this thread, go here:
http://www.spaco.org/Blacksmithing/Rust/ElectrolyticDerusting.htm

—for a similar, but slightly different look at the process.

Note that the electrolytic process will NOT dissolve mill scale, which is often just “rust” with one less oxygen atom.
But the vinegar sure will. In fact several of my blacksmith friends use the vinegar regularly (or pool cleaner pH-, I think) to remove forging scale.

I think that’s the main reason people like molasses. It’s “gentler” than the vinegar, and still cleans the rust off amazingly well.

Testing out the vinegar vs molasses. Vinegar acts pretty fast! Molasses is slower.

Hi Neil,
I was just cruising through and checked out the first link. Yes, it’s a good picture but the drawing is incorrect. The battery terminal wires need to be switched. The cathode is then negative, not positive as shown.and the anode is then positive, not negative as shown. The cathode, being the negative terminal is where the positively charged hydrogen gas (H2+ molecule) forms. H2 has a charge of +1 and would be attracted to (formed at) the negative electrode as shown in this diagram. Two hydrogen atoms are covalently bonded basically meaning they have a single shared electron with a charge of -1, however the 2 H atoms each has its own proton with a +1 charge or +2 total, the resultant charge of the molecule H2 then being (-1 +2) or +1. This process produces twice as much hydrogen as oxygen so the volumes shown on that drawing are correctly showing twice the volume of hydrogen as oxygen.
I guess you found the chemistry buff in me, started with a Gilbert chemistry set for my 11th birthday, 1953. I hope this clears it up a bit.
Pepe
EDIT: I went to the source of that picture and sent a feedback memo to Google also. They say they don’t reply to memos but will check it out. Hope you don’t mind my 2 cents worth. I’ve tried both molasses water and electrolysis. the molasses is slow, but leaves the metal shiny clean. electrolysis is quicker, but leaves a black oxide coating that must be scrubbed off.

I like the pressure washer idea to remove the solution. Haven’t done anything with electrolysis or molasses. I do know that apple cider vinegar is more effective than regular white vinegar. I want to try a mixture of molasses and apple cider vinegar, hopefully getting the speed of vinegar and the thoroughness of the molasses.

Hi all, I have mentioned this here before, Living in an area that treat the roads with salt, this is what I have done for yrs. Scrub the rust with Ospho, and a ss scrub pad (use heavy rubber gloves) leave sit for 15-30 minutes wipe with a clean towel, wait at lest 24 hrs. Primer, and paint ( I use chassis saver silver as a primer) I have all the body parts for my 48 ford truck done this way. They have been out in the weather for over a year now, and not one spot of rust has come back. Remember when you strip all the rust off, that metal has to be pickled or the rust will come back with a vengeance.

Pepe; I have always been confused by this so I am not going to try to explain it other than to say, “electric current flows from positive to negative” “Electrons flow from negative to positive” which s what the drawing shows.
Al, where do you buy Ospho? I had to reblue a gun this week and several people on the net said to use Ospho.TomC

Hi Tom, I get it at Ace hardware

Thanks Al. I live in a town of under 1000 so we don’t have too many places to shop. I had read about using Ospho to blue barrels but had no idea where to get it. One store we do have is an ACE hardware and I went there to buy some “Casey” gun bluing. So I was in the right store just didn’t know what I was looking for. Not happy with how the breech came out so I may go get some Ospho. I redid it twice with Casey’s and still not happy. So Thanks again.TomC

Hey Tom, been an avid black powder shooter for yrs. I agree that the Casey’s blueing kit sucks. Tried reblueing a barrel several yrs. ago didn’t like the results so I polished it bavk off amd went brown instead. Glad I did the longer I owned that rifle the prettier it got. Will try the ospho next time. Thanks
Jesse