Secondary air for a wood stove

I am putting this in off topic because it is not wood gas but is about burning wood so if there is a better place please feel free to move it.
I have a soapstone stove that needs repairs. The cat in this stove gets so hot it burns out the cast metal plate separating the top and bottom of the stove. The rest of the stove is in really good shape and I would hate to scrap such a nice stove. 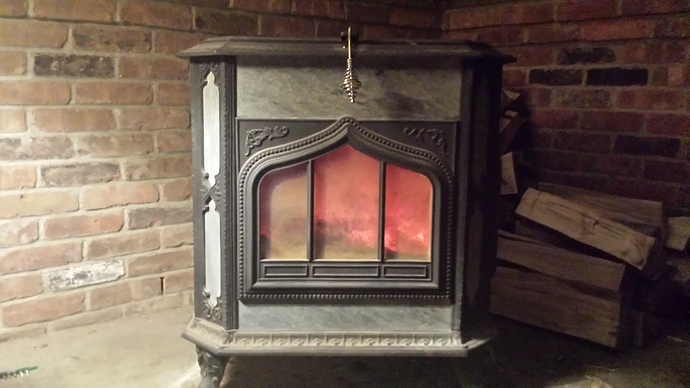 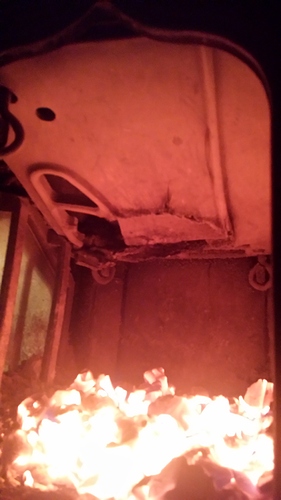 The second photo shows the damage pretty well. The cat has never really lasted that well in this stove it has one of the systems where the cat is in a rectangular box at the top of the stove the smoke turns 90 degrees to get in the cat then cross the top of the stove bruning blue. When it works the top of the stove gets nice and hot and the exaust is still a safe temp going up the chimney but the cat doesn’t last either the damper hits it or deflects the flames back into it braking that corner out then the rest goes. About 2 winters and you needed a new one even before the cast ion was damaged.
I have been doing research on the modern secondary air systems below is one of the better videos that I have seen. I would like to add this type of setup to my soapstone stove this summer. My plan was to build a new middle to the stove like in the video. But put the secondary air right around the opening for the damper between the two sections. My thought was if I could get the right air flow where the smoke is forced to pass I could get a clean blue flame. I am sure that the stove can take the heat if I fix the middle part with fire bricks. It was designed to get hot with the cat that burns out.
My question is everytime I see these secondary air systems they never get a clean blue flame always just orange. Are they not getting enough concentrated air flow? I was thinking maybe they need less holes for the air but a fan to force more flow. I am thinking this is very similar to designing the air flow for a gasificer. Is there a way to calculate how much air I need besides trial and failure? I know what I want but I don’t know how to get there. 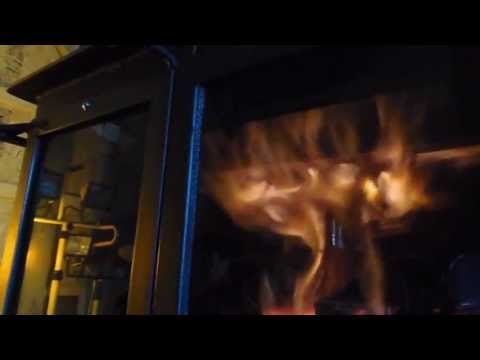 I know what I want but I don’t know how to get there.

Strange, i started with the same kind of thinking… long time ago
now these day’s i know how to get there, but forgot what i wanted…

quick 2 cents answer: not all yellow will burn blue… and these yellow’s are hotter then orange and hotter then blue…

LMAO Koen trying to figure out if this means I don’t know how to get there or what I want.
But I am reminded of the saying never assume…

I was thinking I need a blue flame because that is how my down draft Tarm gasification boiler worked so I just assumed it ment I needed to get blue flames to get a truly clean burn. Also because the cat in the soapstone did burn blue when it worked you could pick up the top stone and peek in there to see it.
Maybe I should just setup something like the video and figure my old stove is cleaner and be happy. It is the modern style of getting a complete burn. All I am looking for is a clean burning stove.

The more hot glowing charcoal and less raw wood, the more the flames will turn to be blue…
( remember that carbon burns with blue and volatiles more yellow orange ? )
The secondary air should be in excess to ensure a full burn before it enters the cheminee

It might be helpfull to replace the upper plate with a “ceramic oven plate” ? instead of the ever burning away cast iron plate ?
Those oven plates, i can not recall there name, but i use them as well in my oven at high temperatures…
It also helps to build in the bottom center a fire brick pot where the air blows from the bottom upwards and a secondary air, with ballanced weight valve, reacting according the draft created in the cheminee…
( building a rocketstove in the middle of your stove

A couple of comments ---- a friend of mine has two soap stone stoves and I remember he told me he burned out the “cat” . He talked to the factory and they sent him a new one and told him what he had done wrong to burn it out. As far as I know, they are both still burning several years later. I will check with him and let you know if I am wrong.

I have a hard time understanding secondary burn in a stove. If you get enough air to the fire, don’t you get a complete burn??? Obviously not. So what is going on?? TomC

Tom I am sure the problem is both my uncles in the past ran the stove to hot. The system is only designed to be soo hot. I just figured out that I have the fireview 201 I can order the full baffle kit it isn’t cheap but I think I might try it. The other problem with this one is it one of the really early ones which doesn’t have the secondary air at the cat which was added at some point I was just reading how you replace the baffle and they mentioned the secondary air.
As to secondary air it is my understanding that air entering low in the stove will go into turning the solid fuel into gas. Air higher in the stove goes to burning the gas before it goes up the chimney. If you put more primary air in you just get a faster burn not a cleaner burn.

Just called my friend with the soap stone stoves— one is 12 years old and one is 16 years old. He burned the first one up fairly quickly. Something about you divert the air from the fire around the "cat’ until a certain temp, then you move the exhaust so that it goes to the “cat” and at the same time have to shut the air down to keep from getting flames up into the “cat”. He has to put in a new “cat” every two or three years, when he operates it properly. I don’t know if it is important to the soapstone stove or just good heating practice, but he has learned to clean the chimney annually.

I guess when it come to secondary air, I will have to let others work on it and when I see something I can copy, I will. My basic understanding isn’t good enough for experimenting. I had a heater made out of 2 - 55 gallon barrels, with one of the kits you buy. Over time, there is a 6 inch pipe about 4 inches long between the two barrels. It rusted out after time. I have wondered why the leaks in that pipe did not work as “secondary air”. TomC

Tom you hit the nail on the head with the replacement every two years in the soapstone stove that is what bugs me. The other stove I have which is the same vintage as the soapstone still has the original cat probably 30 years later and it works perfectly. Well the cat works the rest of that stove not so much I have done a lot of repairs to it and it will be replaced in the not too distance future it is a steal stove not worth fixing.
But that is why I wanted to try seconds air it is how the newer stoves are built and even if I put in pipes I have to replace every few years that cat is expensive. I really think on this version of the soapstone stove it was a case of having to meet a new standard and they didn’t understand or couldn’t fit the right cat into the design. It is a great stove with a bad cat design.
Oh the cleaning the chimney. Not the soapstone stove at fault there. It is good practices but unless the chimney is on an outside wall or undersized you should not get much out when you clean it. If your friend has trouble there check out his wood he might be burning it too green.

My chum with the Chimney fire has been in the back of my mind these last couple of days.
I would like to suggest he add some secondary air to it.
In fact extra combustion air on demand when the boiler requires more heat ( both Primary and secondary ) and idle air.

It is real hard to convince people they could do better than a traditional stove. 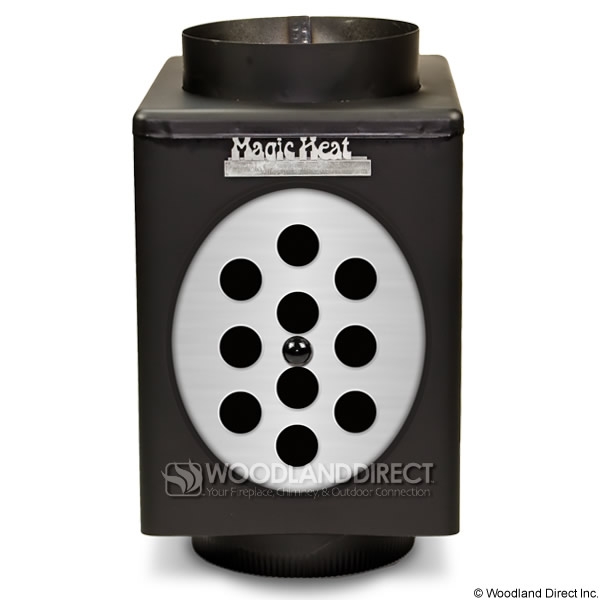 The Magic Heat 6" Heat Reclaimer increases the efficiency of your oil, wood and coal burning stove. When the exhaust gases from your wood stove heat the stove pipe to 280ºF, the Magic Heat's internal thermometer turns it on. The Magic Heat's electric

Those do work my best friend had one when I was a kid it has temperature control so it only pulls excess heat out of the stove pipe leaving it hot enough for the gas to go up the chimney. Helps to avoid a chimney fire for people who run things too hot to.

I really like my Magic Heat. I brought it up here from my garage in the cities. It would be too much for my house but for the shop it’s great. I have a terrible stove and no insulation, this keeps it at decent working temps. It’s best to keep the handle out a few inches to clean the tubes in case they get too built up. 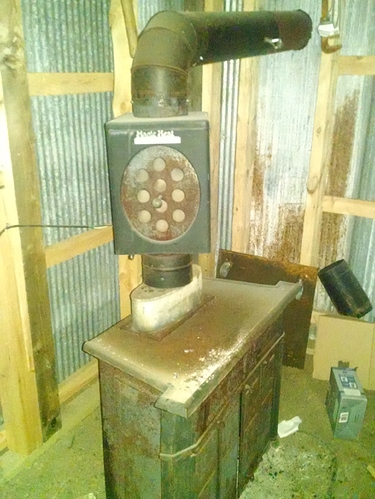 I’ve heated pretty much completely with wood for over 40 years. In the 70s and 80s I used a stove I’d welded up out of 1/4" plate. I kept trying this and that to get it more efficient. After 15 years somebody convinced me to buy a Jotul #8 with a catalytic converter saying it would be much better. Turned out it burned about the same amount of wood but would go through a converter and burn through the back casting in 2 seasons or less. I finally gave up and replaced it with a non catalytic Jotul F400 Castine and have been very happy with it.

One of the best wood stoves I’ve seen was a Valley Comfort, plain box stove, long fire box, fire brick lined around the bottom, bimetal thermal damper, no catalytic converter. You still have to stoke it right, but properly managed with hot fires reducing to coals we heated a 1,400 ft house burning 5 cords of wood for 20 years with the same stove, chimney hardly required cleaning.