Should a gasifier system have flywheel capabilities?

I think if a gasifier where to be designed for a generator , water pumping or several other usages there would be no need for any flywheel effects . However if designing a gasifier for a vehicle with stop and go traffic , up and down hills or farm work where heavy acceleration and back to idle is needed one might think about this effect .

How can we get this flywheel effect ? I think gas storage. But storage will take a lot of room ! Adds very little weight but takes room. This is one reason I like my pick up trucks with space.

Gas storage are . Under the fire tube and grate , heat exchanger , collection tank under the truck and the hay filter drum. Careful not to have all the storage in one big container for safety reasons .

Another flywheel effect can be accomplished with heat energy . This can be done with pounds of metal in the hottest part of the gasifier ( burn tube capsule ) But this makes the gasifier heavy Yes but my small truck will not notice 300-500 pounds setting in the front portion of the truck bed . My big truck would never notice 1000 pounds in the bed .

I do understand there are as many driving condition as there are people and gasifers .

Comments please , You will not hurt feelings

Hi Wayne, have you ever opened up your soot drop out heat exchanger and let air in and timed how long your truck engine would run on fast idle?
I have never done that.
Bob

No I have never done that .

What I would expect is when open the heatX the fuel /air ratio would go heavy on the rich side momentaly because no longer the drag of gas through the car bed .

If the gas temp in the container was at or above the flash point KABOOM when fresh air entered .

Yup when I have the gasifer running I leave it alone to do what it design to do and drive down the road.
Bob

Hi WayneK, On the heat flywheel effect add in the mass of hot char-ash too.
Bigger internal system volume. At a higher temperature. Greater effect.

Ha! In comparision to Larry Dobson and a couple of other gasifermen: PowerHearth; IISc, you are only middle of the road.
A nice safe place to be.
S.U.

Hi Wayne Steve’s comment above.
You built a gasifer with a large fire tube 14" , 16"?
I remember it was not cost effective for the average builder for your WK book build.
But how was the flywheel capabilities of that gasifer unit. Do you still have that truck?
Bob

Yes I still have the truck , 94 dodge ram D1500 4wd 318 motor . I drove it to Argos one year but can not remember which. About 1500 mile round trip including rides at the event . It had a 16 inch burn tube but needed tune down somewhat for around home use. The truck has a big profile , same body as my V-10 truck and just a little lighter . It operates good at speeds between 50 -60 but just can not stay up with the little v-8 dakotas out on the road .

The building was expensive I used over sized drums at a cost of near $200 each vs the 55 gal drums 15-20 bucks each . I tried to get by with just the two of the big drums but had to weld closed areas that I usually make removible .

The son used the truck a couple years driving to school and with the very short trip to school and all the extra after school activities he was involved with I would not let him drive on wood . I temporarily set the gasifier off the truck and am keeping it handy incase my work truck should break down.

The son wanted something a little more sporty so he bought a toyota .

Wayne thanks for the information. You must be living right when it comes down to finding Dodge Dakota’s
All I can find up here is a bunch of beat up thrashed wore out 4×4 trucks that need a lot of work on them and they want way to much money for. We have a lot of off highway driving roads to drive on in the mountains for 4×4 trucks. Finding one that was kept in a garage and no off roading 4×4 truck would be very, very hard to find. At least we do not live in the salt on the road salt belt states for winter driving.
They do use a road de-Icer here, but it is not as bad as the salt belt states.
Bob

Hello Wayne, I’ve also been breaking my head thinking about storing gas in stock, squeezing, liquefying,… but there are no easy solutions here. The gasification process itself has a certain inertia, which is increased by massive, heavy gasifiers, both slow start-up and excess gas at shutdown, similar happens with heating boilers, operation at low heat removals causes tar formation in fireboxes and chimneys, and leakage of combustible gases into the air, so here by installing a water tank we solve these problems and increase the comfort of heating, easily and cheaply. When driving on wood gas, in my opinion, comes the ideal solution, an electric car, which we will charge on wood generators, so the gasifiers will no longer matter weight, volume, but only efficiency will be important, as well as heat for heating will be on abundance.

“It an air bed. An off the shelf gasbag.”
John Stout seemed to have the idea of storing gas in an air mattress. Does anyone know whether that worked?
Rindert

Actually I have stored gas in a mattress Rindert. My wife kicked me out of the bedroom.
If it’s about storing or maintaining heat, how is having extra mass in the firetube not the best and easiest option? Otherwise how would you get the gas cool enough to store in anything besides a metal container unless it was stored somewhere between the engine and filter. That means the storage would be taking up bed space or vulnerable somewhere between the frame rails beneath the truck. Under there a heavier, more durable container so more weight anyway. If a breach in the tank allowed air in to cause an explosion I don’t want to be sitting on top of it. Don’t get a lot of use out of the tender parts anymore but I still want to go into the here after with them intact. I’ve heard about heaven. I think they are still useful there or else I ain’t going.

still useful there or else I ain’t going

This flywheel effect that I was talking about was gas storage or reservoir of about 5 to 15 seconds of open throttle . Each container already has a primary function . Drop box , hay filter housing ,cooling rails , condensate collection tank and area in the gasifier housing . This area amounts to about 20- 40 gallons but doesn’t give any more power but makes the truck run smoother in some conditions and a quicker start up on wood gas after shut down a little while. Some of the conditions I am thinking about on the farm are trying to get hooked to a trailer without being throttled up . Backing up , pulling up moving over backing up again and on and on. Also trying to back a loaded trailer in a tight spot.

Again a flywheel ( effect ) doesn’t give any more or less power just makes the maneuvering smoother .

PS Just shut the truck down from about 40 mile ride to feed store , junk store and grocery shopping . 9 years of use on the old truck as daily driver

Well . . . maybe an inline booster blower at your air-in on your center heat exchanger tank?
Switch on just for that low draw need gas situation.
Like a carburetor one squirt accelerator (smoothing) pump shot.
S.U. 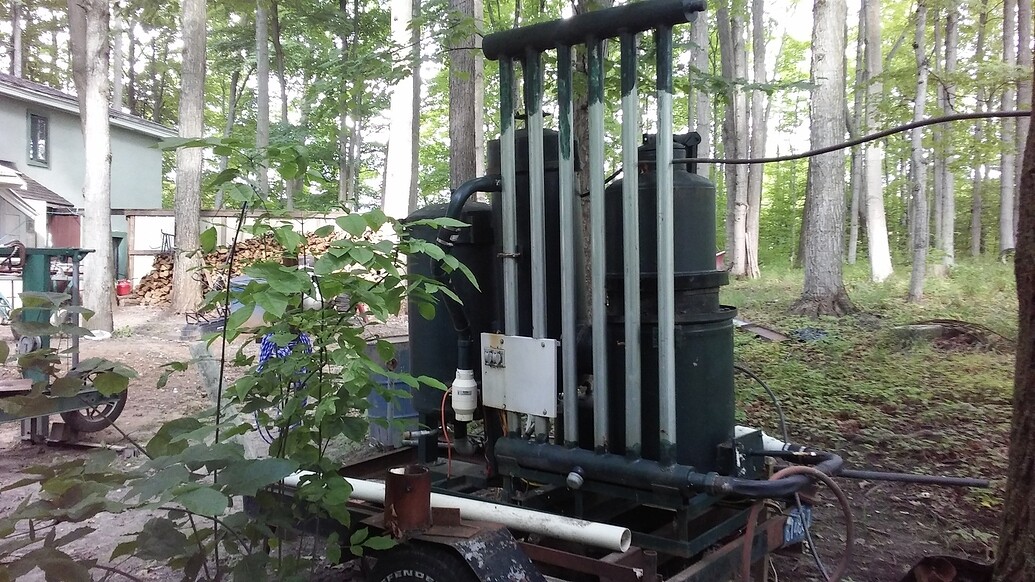 Admittedly I never bothered to learn how to work this thing but I’m pretty sure I followed all the instructions. Isn’t this blower feeding the heat exchanger what you are talking about?

Also school me on this. Not sure how you could do it on a WK but if you injected a shot of oxygen into something like the nozzle ring on Joni’s gasifier wouldn’t that be about the same as reving the engine to increase the pull on the gases?