The red lines are threaded connections ( see pictures ) either inside or outside.

Next drawing will be a scrubber with water-flushing capacity

I would like to post only idea’s about filters or dust cyclones which are easy to build or to copy…
All info about useful filter materials are welcome.

In this first set up there is only one piece to be modified; the top reduction to pass the inner tube… There are some examples of PVC filter containers by youtube user Flash001USA. Gasifier video 6 (New filter design confirmed 100%) - YouTube You may have to look in his other videos to see the filter construction technique. (I run his videos at 1.5X or 2.0X speed, because they are long.)
I built a single pipe filter according to his directions of using a propane torch to soften the pvc hole enough to screw in a threaded adapter with a 2" output. Once everything cooled down, I applied PVC cement and screwed it together. The adapter fitting assembly then slip fits over a larger PVC pipe that contains the filter medium.

i looked into this video and it is exactly what we are aiming at; constructing simple filters…

But we also should pay attention to the W.W.H rules
What we filter
Why we filter it
How we filter it

In the designs we also think about following: layer surface = lifetime of the filter, layer thickness/material = quality of the filter

looking back to the layout in this movie and the gasifier he’s running, i hope he’s not going to run it hot…

we also can discuss the scrubbers/coolers in this topic and have some designs from european websites to talk about.

The filter media for Hydrogen sulfate (acid from the hydrogen)

Its stone with a lot of iron oxide, it crumbles easy into smaller particles… Here the set of filters i use now with my set, work well and can be adapted to the job… One little factor to be aware of- it might be a good idea to design out volume within the filters to reduce the consequences of the gas mixture exploding- alternatively giving an explosion somewhere safe to go, or adding a cool metal filter as a flame trap.

Hi Brian,
in case of a “puff” we might use the drain plug to make a water lock. but since the flame speed is that low, i guess it just might be an option, but can be done.
Any how, the plastic has a lower burst resistance then iron or steel, so less pressure can be build up.

But always stay on the safe side … i will use the drain as a pressure relief check valve.

Koen: As someone who has been hit at 5m by PVC shrapnel from a “Spud Gun” (home-made large bore, vapor fired potato launcher), I can say that the bursting pressure of PVC is “high enough” to do some damage from a puff-back.

My own suggestion… make the first thing for the gas leaving the gasifier a thin walled metal tube to condense out any vapours- hopefully only water vapour, and add a clear trap at the bottom to see what’s condensing. Do you find that any old open cell sponge filters well, or would it be worth splashing out on filter sponge from the motorbike shop? Vacuum cleaner bags might be a possibility. The other angle to this is dust filtering for the charcoal processing.

Since I haven’t forgotten my eyeful of hot debris, managing the likelihood and consequences of a puff-back is a hot topic for me- I like the idea of the sink plug, and I want to put a check valve on the intake- remember that as soon as it leaves the back yard, this is the sort of thing that safety inspectors will be all over.

hi Brian H.
I was working on the filters today in preparation for the demonstration.
Since the gas leaves the gasifier already in a “cold” state <50°C and if the setup is ok, the gas is “dry”
In case i give to much air for the combustion, the amount of non converted co2 will rise and possibly react with the Hydrogen into methane and water
So; water injection for the Hydrogen with to much air is to be avoided.
If you take a look to the picture i use very thin walled plastic piping from polyethylen with slip on conectors.
In the filters i had to reduce the hight of the “iron ore” in the second stage to decrease the fow resistance.
I used; in this order , coarse foam , fine foam, rice husk, iron ore, racing filter from motorbike.
The iron ore is for the Hydrogen sulfide.
The height of my reactor and the amount of charcoal above the combustion , keeps the heat in the reactor and is also a first filter stage.
This knowledge makes it possible to consider using coarse charcoal as filter media as well in the filters.
Any filter that is designed for IC engines can be used, also can be used is the filters from swimming pools ( the cylindric ones )
The thing to check with a vacuum test is the amount of restriction created.
Finaly: open cell sponge with the sticky filter oil will perform best for fine charcoal “soot”
Here a picture from the final prototype with a gasoline generator. I realize that this is a very old thread, but it has the best title for what I want to talk about. There are bits and pieces about filters spread around DOW. I wish they were all under one heading or two? (one for charcoal and one for woodgas). I believe my idea could be used on either system and scaled up.

Since I’ve been thinking about a new gasifier for my generator, I woke up with an idea for a filter. Over on “Don’s Geo Tracker Project 2” there is a discussion about using wool (an old idea) and in this thread Koen mentions using charcoal (also an old idea). Somewhere Gary G suggested using screw on Gamma lids for 5 gallon buckets. Also variations of sock filters keep coming up in these discussions.

Here is the idea: Install a 4 inch diameter by 10 inch sock filter vertically in the center of a plastic bucket. The outlet is threaded through the bottom and the top of the filter (toe of the sock) ends about 3 inches below a gamma lid that has an inlet fitting. Now fill in the bucket with charcoal granules that are >1/8" and < 1/4".

The adsorbing charcoal will do the filtering work and the filter sock holds the charcoal in place. I would still pre-filter with a cyclone, but instead of a cyclone a wool blanket disc could be laid over the charcoal. The wool would capture fines that could be easily cleaned out between runs.

Hello Bruce,
Remember the video David Parrot made of Gary Gilmore’s Gilmore Gasifier (Kalle) in 2011? It had one container that was part cyclone, then filtering with charcoal, cotton, and open cell foam. (I built a copy of it.) It is shown in the last half of this video. 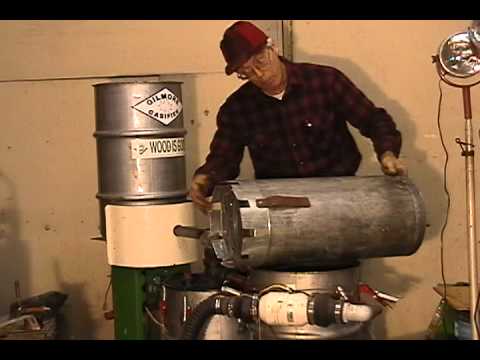 I imagine a wool blanket laid over the open cell foam would work very well. In mine, I just remove the open cell foam and blow it out. Sometimes water collects in the bottom of the barrel holding the whole works, and as Gary says, the charcoal does absorb tar and water. I put any wet charcoal out on my screen to dry, dump out the barrel, etc. My seal at the top consists of some foam backer rod (used for sealing wide gaps in tilt-up concrete wall construction). It is a really tight fit, so I ended up smearing it with grease so I can get it into the barrel around the Freon tank.

I’ve been using thin wall PVC for years. No screws, no threads, only slip fittings. The vacuum holds it together just fine. Saves lots of time and some material. Later this week I’ll get some pictures. The none removable portions are glued or threaded, I think (time goes by fast along with memory).

Thanks Ray & Jeff. Hopefully this conversation will help guys looking around for filter ideas.

I have a 1" inline filter with a clear body and a fine screen removable cartridge. I wrap the cartridge with white fiberglass cloth so I can visually judge the effectiveness of different filters. I think Koen did a test with a white cloth over his flare outlet ?

See “What kind of filter media?” under the General Discussion heading for some woodgas filter stuff.

And “Oil bath final filter” I guess I should figure out how to put in links?