Lets the woodgas message out there! 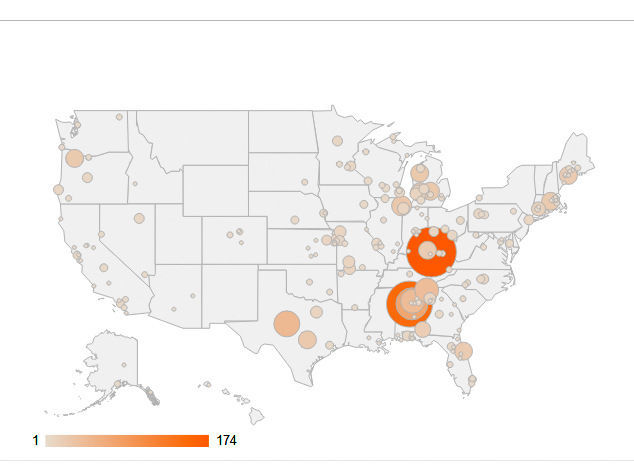 Funny, the top half of the continent seems to have vanished! Maybe one day we to can get this mysterious internet I hear so much about… Just like political data and polling, or asking for a raise from your boss for that matter. It’s all in how you present it.

Its the little things… We’re sensitive.

wow, that second graphic makes interest in wayne’s gasification project look like its gone viral, even epidemic in the eastern half of the country.

I wonder if there is a correlation between heavily forested areas that live off wood and interest in woodgas? It seems like a Carolinian forest map to me. Just a thought.

You betcha’ DavidB. Gotta have the wood growing in the first place. Central continental, SE and even NE of the USA has a bit more of an explanation though. Not to be insensitive folks. But when each and every year Nature in the form of tornados, hurricanes and ice storms is harvesting woody mass growing and already been harvested built with flattened down to the ground level that has to be then picked up just to be able to move around . . . well. I figure with woodgas making they are just making lemonaid out of all of the lemons of life they are forced to live with.
Up here we have to be tree killers and cut them down ourselves.
Regards
Steve Unruh

Chris, I hope I didn’t screw up your visit duration statistics a couple of times when I forgot to log off!
Don M

It’s smarter than that. There’s no way to screw with the stats, don’t worry! It’s fine to stay logged in BTW, as long as its not a public computer.

Been a while since I updated this. You’ll recall we started with 10K as a milestone, then 100K… now over a year later we’re officially past a million pageviews, 1.09 million to be exact.

We also had our biggest traffic day ever on Monday, at nearly 10K pageviews (about 2K unique visits); we were mentioned by Doug Brethower on the Survival Blog, a high traffic survival/prepper site. Thanks for the boost Doug!

I’ve included the world map and the US map. Note that the scale is MUCH larger now than the original map. Places with less than 100 visits don’t even register here (sorry, best I can do at this scale). Chris, Pretty cool … ! How’s the banjo thing doing ?? I hope you can get another few runs of this book out the door before folks go back into a coma and I hope that banjo thing is panning out. You have done a great job … Mike

cheers for putting the map up Chris

Wow… Tim Johnson, Derek Evens, and I have some pretty big dots.

I thought I felt the site “chug” a little slow one day…15 members on line - couldn’t believe it ! - as I speak there is 13, not sure if its the traffic or just my connection. In any case its good to see things are busy and catching on.
Thanks for the map update Chris.

Just started using this site. Drupal is powerful, good choice Chris and well implemented. Wayne’s work is amazing as usual. I predict this will take the place of the yahoo group for the subject of wood powered vehicles.

Time for another map. This time I’ve plotted over 600 Premium members. And more every day! Incredible!! So proud to be a part.