Something to read for you Dieselers wanting to DOW

I came across this article on Wikipedia (linked from the main gasifier page) about the process of converting woodgas and similar products into either diesel fuel or synthetic lubricants: http://en.wikipedia.org/wiki/Fischer-Tropsch_process Has anybody heard of this or tried to figure out a way to get it to work? It’d be pretty great to be able to use wood/biomass stocks to do everything from powering our trucks (as some of us already do) to lubricating our engines and drive-trains to powering that old diesel tractor that we can’t afford to run due to diesel prices.

On a similar note, Wayne Kieth gets a mention at the bottom of the “Wood Gas-Generator” wikipedia page: http://en.wikipedia.org/wiki/Wood_gas_generator Right above that, it mentions that the official world record for driving on woodgas is 73 MPH. I somewhat remember Wayne mentioning going faster than that in one of his videos.

Hi Brian
I saw your post and i used to work with fischer tropsch fuels at the DOE
It’s pretty neat fuel it’s basicly parifin it can be made from about any fuel nat gas was a favorite because it was already pretty pure.
The germans invented the process when we cut off there oil
I have forgotten the exact process but it involves running the gas across a catalist at a high temp
I’m not sure how wood gas would work but that would be neat if you could do it Maybe STEVE U will reply he seems to be reallyup to speed on the tech end of fuels
good luck
Tom

The Wiki article also mentions the Keith gasifier as a new design. http://en.wikipedia.org/wiki/Wood_gas_generator#Design

Callum is right, this is a hugely complex and expensive process for an individual. Even at the factory scale it’s very hard to make it cost effective. I was just reading a paper which stated that the smallest FT process plants were too big for the LARGEST biomass gasifiers in existence. Only viable with coal or natural gas inputs Complete difference in scale.

The efficiency is pretty low, from 25-50%. Even charcoal is better at 60%, and you can make it at home. Whereas direct gasification has the highest efficiency and value of any raw fuel, EVER. It can’t be beat for overall efficiency because it’s being made and used directly.

I made a presentation on this topic just for fun, and posted it over here: http://driveonwood.com/content/direct-gasification

Diesel guys that I talk to are much more interested in WVO and homemade biodiesel. You can even make diesel from melted plastic. These options are simpler than gasification, run the diesel just fine, and due to quirks in the market are cheap/free for now.

I need to be carefull with these videos that deal with speed , I would hate to receive a speeding ticket through the mail referencing to a YouTube video link.

I think an Alabama State trooper my have me on video , I know he has me on radar and I have a void in my pocket book to prove it.

Here is a link that John Rockhold with Mother Earth News put up. This is in the state of Kansas and I think there statute of limitations for this offence would be a year so I lucked out on this. 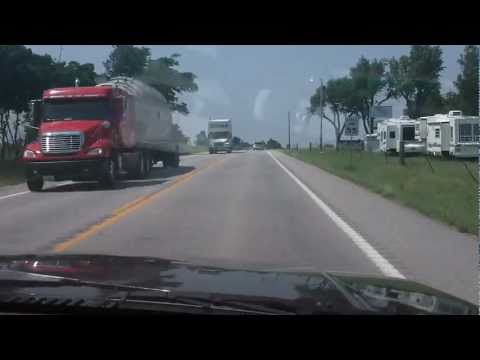