George Adams and I sorted some wood chips with our new-to-us grain cleaner on Monday, August 19th and made a video of the event.
It is here: 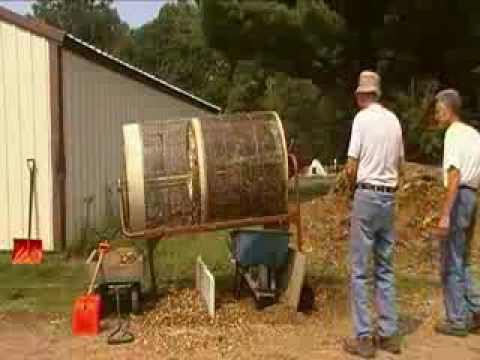 It is 22 minutes long, but you can speed through it if you want.

We can see several opportunities to streamline the process even more, but it works pretty well as it is. I was thinking that a guy could either gasoline power the grain cleaner or run a generator to supply power to the motor and mount the whole thing on a trailer. That way one could simply drive to the site of utility wood chipping (where they leave the stuff on the ground anyway) and sort the material right there. —No mess to clean up or dispose of at home.

Thanks for sharing that I am planning to build something like this. The cone part has me confused, what if it was just removed. Then it would be easier to just let the large material roll around and drop out the far end. This would avoid the jamming that occurred in the second batch on the video. Getting them to pass through that rectangular section would be a challenge also.

I was planing to put auger like pieces inside to push the chip through but the tilt idea on that machine makes a lot of sense.

Yes, you are right in questioning the “cone”. We have been talking about eliminating it too. It appears that one major use of these grain cleaners was to clean corn kernels. Pieces of corn cob would probably have been the major trash extracted by the cone.
But,---- notice that with my wood chips, the ones that did NOT contain the tangled branches/twigs, that problem does not occur. On one previous run of my chips, a fair amount of trash DID exit from the cone.
But still, I see your point. If you did not have the cone, those branch parts would simply make it all the way to the end ---- we think.

And yes, the “tilt” seems to work quite well.

As a matter of fact, I am bidding on another grain cleaner at a on-line auction as we speak. It does not have a cone… But it does have an auger to feed the material to the cleaner from about one foot off the ground. Tossing buckets of material at the machine is no big deal, but I suppose if you are feeding the system from a gravity box, it might be important.
Of course, if I do get this other grain cleaner, it will need all new screens (so did the one we currently have), since they seem to come with screens that are about 1/8" or even 3/32" mesh.
The guy we bought ours from told us that :
“back in the days when everyone was burning corn in corn stoves, they learned pretty quickly that any amount of corn cob in the fuel would plug up the corn stove’s internal auger, so, if you had a corn stove you also HAD to have a grain cleaner. Now, of course nobody has a corn stove anymore”. The guy said he used to be able to sell every one he could get his hands on. but the ,market has pretty ,much dried up now.
I tell you this to suggest that you might save a lot of time by shopping around rather than making one.
We noticed that, on our commercially made machine, they have paid a lot of attention to little details that could easily be missed on your own first design.

We’d still like to have a way to “float” out the twigs. —Like a straw walker in a combine harvester,
I wonder how well the GEK guys did with that vibratory sorter they built a couple of years ago.

Here’s a DIY chip sorter I built a few years back using a 55 gal drum cut into 4 pieces and reassembled with 4 different sizes of hardware cloth. Add in a 2x4 frame and a few 2" castors and voila! The motor you see in the pic didn’t work out, so right now I’m rotating it by hand until I find a better solution. The trouble with things that vibrate is they break and fall apart. That rotating drum is simple and effective. I have never seen one of these here in Australia, nor have I seen of heard of a corn stove.

I have found my source of wood chips varies a lot in size and leave etc. Last lot I got had lots of over size pieces that would have fouled up that cone just like in your video, previous loads would have gone through as it had mostly smaller pieces and a lot about the size of chainsaw cuttings.

Billy if you look around you may find a washing machine motor and gearbox would adapt well. That is the type that runs the motor in both directions to agitate. Just fit a pulley to the agitator shaft and a belt round the outside of you drum.

How does that size drum perform Billy would it work as fast as the one in the video? I know I am not going to do much more hand sorting of chips, especially after seeing that video.

Great idea on the washing machine motor and gearbox!

The 55 gal drum handles 5 gal buckets of chips quite well. Throw in a bucket of chips, rotate the drum about 5 or 6 revolutions until the majority of the wood chips have traveled to the middle screen, then throw in another bucket. The angle of the frame can be adjusted to influence the residence time of the wood chips. I believe it’s currently at around 20 degrees. Once motorized, I believe it would perform very similarly to the one in the video.

I’m using 1/4" hardware cloth in the first section, which passes most of the dirt and sawdust. Next is 1/2" hardware cloth. The chips that pass here are used in a small gasifier experiment with a 6" hearth. They also make great walking path material for the garden. Third is 1"x2" fencing wire, this is where the good fuel drops out. Lastly, trash falls out the end of the drum. My wood chip source is free, but contains the occasional plastic bottle, twig and plastic garbage bag. All of this unwanted stuff travels past all of the screens.

For my needs just 2 screens would do, first 12mm square to get the fines out which I also use for garden mulch etc. The second is 25 X 50 mm which gives the chips I need for the gasifier, the rest is too big. The larger stuff I convert to charcoal which some is is used for cooking and priming the gasifier if I need to clean it out.

Some of the charcoal could broken up and added to the chips if I get too much big stuff.

What you say makes sense to me, Gary. We are currently focusing on slightly smaller chips for our machines. But I think I have lost track of the number of different screens that we have used.
I just bought another grain cleaner yesterday and I just got the new, larger screen material for this one. This one has a 22 inch diameter drum, making it somewhat smaller than our other machine which has a 39 inch drum. I don’t yet know how the drum diameter (and speed) will relate from one size of machine to another, but we will soon see. I am going to go with 1/2" by 1/2" for the first screen and 1/2" by 1 inch for the second screen in an attempt to reduce the amount of twigs that make it to the “keeper” pile.

Will be good to see how that diametre performs Pete.