TIG welding with the wrong gases/polarity

I’m experimenting with a make-shift TIG welder idea I had suggested to me by an old welder/machinist friend. I’ve also never used a TIG welder, so there’s that issue.

What polarity do I want to use as far as Ground Clamp/arc gun?

Since I only have C-25 Argon/CO2 gas for mild steel, what should I expect to see in side effects if I were to use it on other metals, e.g. Mystery Stainless Steel?

I’ll probably be practicing on mostly mild steel to get the technique down before I try anything else. I just want to know what I should be expecting in anomalies for using the wrong gas, etc.

Thanks for bringing up the subject. I would prefer to tig weld but I can’t stand purchasing or renting another bottle. I don’t have a tig welder, so I hope besides waiting for replies, you will experiment and let us know what you find. Start out with the simplest, tig welding mild steel. Then go on to stainless.TomC

A post was merged into an existing topic: Tom Collins’ Gasifier

@TomC the jist of it is to take a MIG welder (that does NOT have a no-feed safety shut off);

Buy some tungsten TIG electrodes (much cheaper/better than the plain tungsten carbide rod I bought on Amazon >_<);

Drill out a MIG contact tip to the diameter of your TIG electrode (I’m using one that has MIG wire welded into it);

Insert a small section of your TIG electrode into the MIG tip;

To convert back to MIG: just screw in a good tip; hook up the wire feed roller again; feed your MIG wire back through. Good to go.

Side question: would there be any reason why a “200 Amp (stick) electrode holder” (aka a “stinger”) would not work as a grounding clamp for my welder? My cheap grounding clamp that came with my welder is getting pretty twisted/bent up, and I just found the brand new stinger I’d bought at a garage sale a few years back.

Hmmm Very interesting. When I have tig welded I had the torch in one hand, the tungsten, in the other and my foot was on a peddle that varied the amps. Adjusting the amps as you go is going to be very hard with the dial on the welder. TomC

Isn’t the tungsten held inside the torch in one’s primary hand, and the filler-rod (mild steel for example) held in one’s offhand?

Been 35 years since I tig welded and as I recall, the torch just had an electrical arc that heated the metal up to molten state. I know when doing aluminum I had a problem heating the part up too hot before I heated the filler rod, and the aluminum would just fall out… With your mig torch the amount of “stick out” will very the amperage. When mig welding you have to keep a constant distance to maintain the correct heat on the weld. TomC 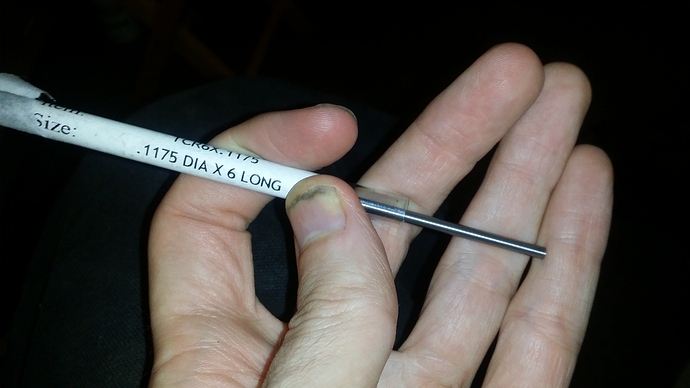 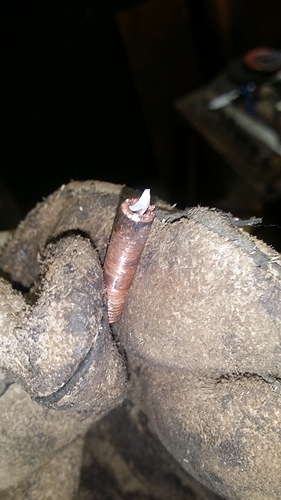 Damned… Ruined a tip and my drill bit. 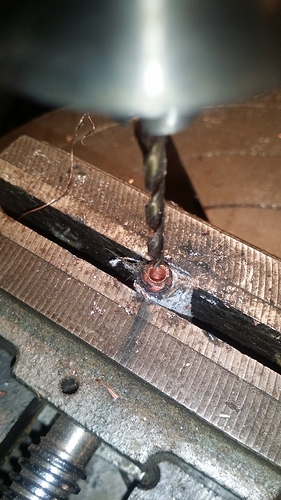 SECOND TIME IS THE CHARM! I annealed the tip (same way as hardening steel: heat it till it glows and dunk it in cold water) and used some axle grease as cutting fluid. It went MUCH smoother. That’s a 1/8th inch hole in my MIG tip, a bit deeper than needed. 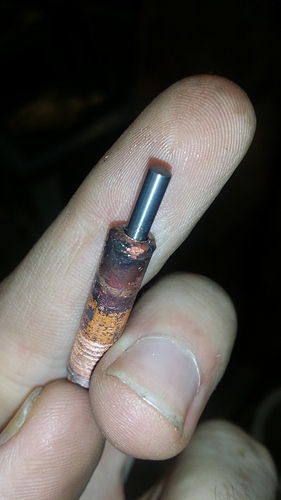 1 inch length of tungsten rod has almost exactly 3/8ths sticking out. The fit is loose though. 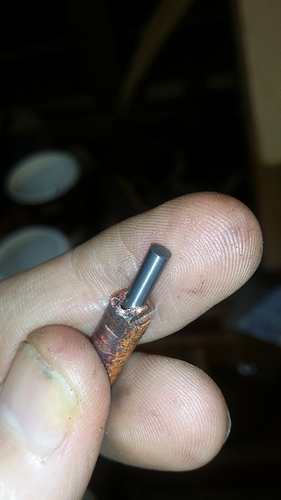 let’s just crimp that in my bench vice… Looks pretty good… Ok, it looks like crap, but let’s see if it works!

I tig welded out of high school. For less than a year. I am right handed and i held torch whith right while feeding rod with the left. I think aluminum welding needs strait argon gas, not sure with ss steel gas needed for good strong welds.I think my century snapel mig welder has tig option though i never thought of tiging the way you are attempting,please let us know your set up when finished makeing it work.Thanks.

That’s how I thought it was held and the videos showed online. 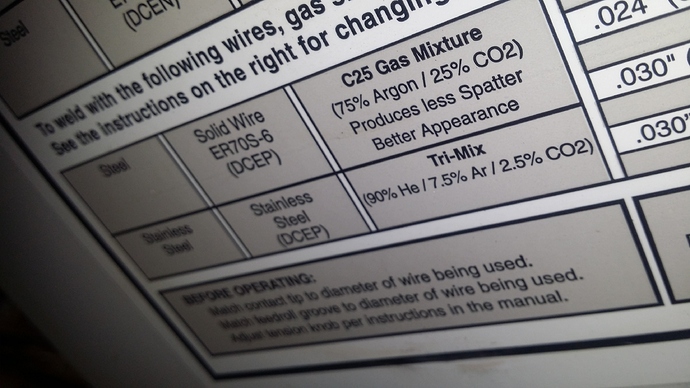 A lot of TIG machines also offer stick welding ability, because they share the CC power supply. I’ve seen people do scratch start TIG from a stick welder. It works, but not as nice as a “real” TIG. Here’s Jody at Tips & Tricks doing it with an AC buzzbox and a rectifier: 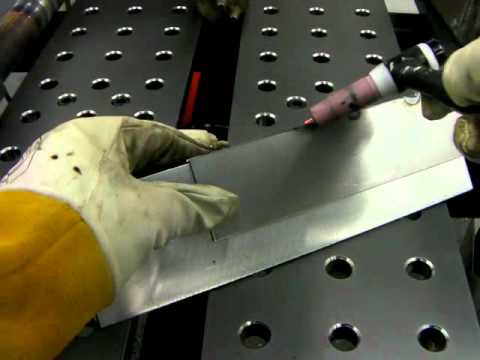 Hey Bruce. The helium component is the Cadillac noble gas for SS. But at my employer, straight argon is used on the TIG welder for mild steel, SS, and aluminum. Works great on all. The MIG welding is always CO2 / Argon.
Your repurposing MIG to TIG is genius.

Almost complete failure. In standard mild steel DCEP (DC Electrode Positive) mode; I could at least sort of sustain an arc, but it just burned my workpiece and the tungsten electrode. Also, it acted like the shielding gas was turned off and volcanoed. (Plenty of gas to weld some other stuff in MIG mode again afterwards).

In DCEN mode (as suggested by an info diagram I saw somewhere); it won’t do anything more than spark once, stick the electrode to the workpiece, and heat up the electrode. Won’t sustain an arc under any circumstances.

Have you tried to put a power shock-coil between the MIG and the electrode, one with an arms thick laminated E-core?
Shall have air-gap in the core, not to become DC-satisfied.

Look out for back-peaks! Protect the MIG with heavy output condensator.

Max, that’s WAY past my electrical knowledge level… I’m not going to mess with it much anymore. Maybe a quick try with proper TIG electrodes…

An electrical (power) choke behaives like a “flywheel”, it opposes any change in the excisting (ongoing) current flowing through it.

This property would add the CC property momentarily, every time the sparking arc is disturbed and attempts to stop.

At that instant the “stobborn” magnetic inductive flywheel induces a hightension peak, which instantly bridges the failing arc. The current wants to continue.

That is the fundamental working principal…

My 200 probley a 150 amp mig had the tig lead on the ground side, it would be intetesting to see the ecore max is saying would make a big improvement if i am not highjacking this thread, would it be ok too see a drawing of the set up ecore with air gap proximity/ details.?

I have just proposed a principal methode to sustain welding current, when otherwise having a “crackling” arc. (put as a question!)

In broad lines of demand a big enough power-choke will help to get some stability. 10 Henrys or more.

An air gap in the core counters the tendency to magnetically satisfy the core = loosing its ability to resist changes in the current.

Practical gaps are about 1/10 —> 1/20 mm. Usually kept under control with a paper or lacquer film.

The welding machine needs a big condensator on its output to swamp up swinging currents made by the arc and the choke.

I think my mig welder has a choke, not sure it is an ecore, its about 3" wide by 8 " tall. My choke is just a strait core no outer steel.seems too have plenty of papper rosin in between the layers of copper winding, and is thick,like about 1/4 " and the thick wire comeing from the transformer too the bridge is half that thick.Thanks for the define design resulting perpose.hope this helps.