To make coal in the forest 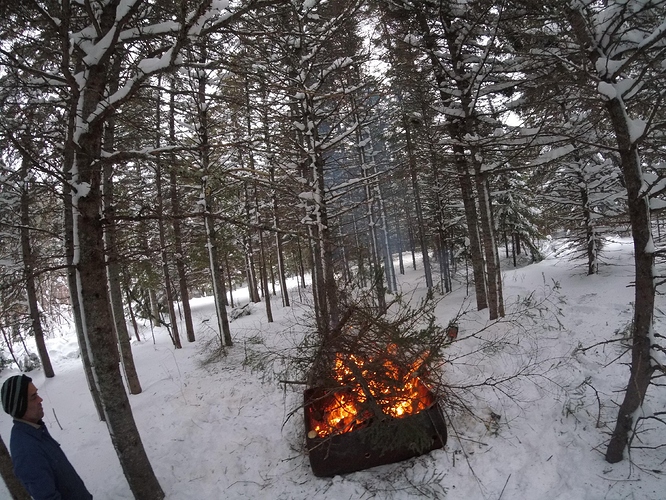 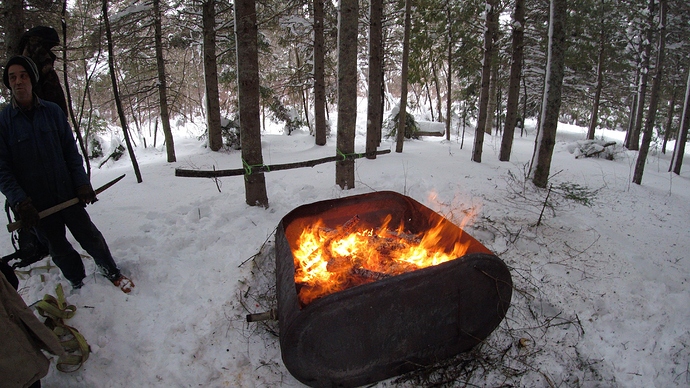 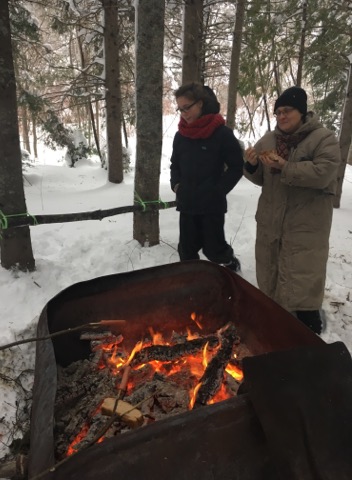 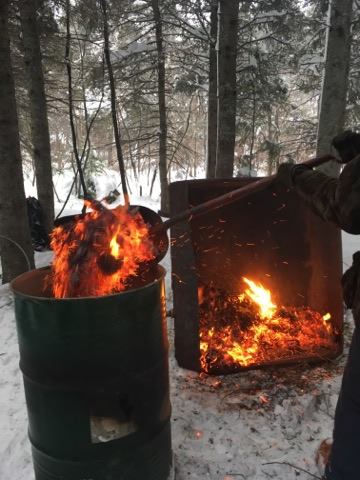 Christmas holidays are perfect for charring dry spruce heads.
Make fire, picnic with family and, as a bonus, harvest charcoal

I like the idea of the old fuel tank. They are readily available around here. I was burning up and old barn that I stacked the lumber in 6’x6’x6’ piles ( Dept of N’tl Resources law) I worked the fire with a rake as it burned. When I got it to hot charcoal I did like you and shoveled it into a 55 gal drum. It was summer but I had to put on an insulated jacket, a hoody, and welding gloves to shovel the coals into the barrel—that cured me of ever wanting to be the fireman on an old coal train. TomC

I have seen three different videos showcasing " old " styles of making charcoal that involved encasing dryish fuel in dirt, sod or a clay shell. I wonder if those methods give a higher or lower percentage of charcoal than an open burn? The open burn seems to give better operator control of the process. A shame to not harvest the heat in a cold environment but like most humans I find an open large fire to be comforting.

Making charcoal in a dirt shell will give more tars and an open burn will give more ash. That is why we prefer to use kilns or retorts. We want maximum charcoal with minimum tar or ash. This fuel tank idea looks like a good one. For those who heat with wood, just fill a can with sticks or pellets, cover with a loose lid and build a fire around it. works great.

Oval fuel tanks have a lifting handle on each end. Add about 15 feet ( 5 metres ) of stout rope or medium chain and you have an open sled to carry your other stuff to the forest.

Oval fuel tanks have a lifting handle on each end. Add about 15 feet ( 5 metres ) of stout rope or medium chain and you have an open sled to carry your other stuff to the forest.

That’s exactly what I do. I too would like to value all those things that are lost in the atmosphere. But the wood that I use would be rotten in the forest (small branch and spruce head) .I feel less guilty to proceed in this way.

Its funny how we chargasers feel guilty for the tiny litle energy we waste to the athmosphere while making char, energy thats not eaven wasted (being given from the sun and all) while big corporations, oil wells and, nevertheless, most people at home leaving lights/appliances unused on for no reason waste milions on milions of kwh every hour…

while big corporations, oil wells and, nevertheless, most people at home leaving lights/appliances unused on for no reason waste milions on milions of kwh every hour…

And a lot of that energy is refined energy. Meaning it takes more than 1 kWh to make 1kWh of electric.

Its funny how we chargasers feel guilty for the tiny litle energy we waste to the athmosphere while making char,

I do not feel guilty but rather responsible. I rather see a challenge to make the best use of energy.
In my opinion , every improvement in the efficient use of energy is a progress for all.

That’s exactly what I think, too. And even if wood is for free, you need time and effort to handle it. So less waste means less work.
This is another good point of the retorts: It’s much easier to use the “waste-heat” for heating your shed, home or water.

It was summer but I had to put on an insulated jacket, a hoody, and welding gloves to shovel the coals into the barrel—that cured me of ever wanting to be the fireman on an old coal train. TomC

Hello Tom, it is often assumed that it is burning hot on the footplate of a steam loco. In fact, it is only a few degrees warmer than outside, as you are not directly exposed to the heat of the fire. So it’s hot in summer, but could be still freezing in winter.

I’m thinking of the fireman who has to stand in front of the open door to the fire box while shoveling coal into it. The radiant heat is scorching. TomC

yes, the radiant heat is very hot, but as a fireman, you are not standing all the time in front of the open firedoor.
This is a video of a “Plandampf”-event (regular trains were replaced for a few days with historic steam trains). The event was 2009. You can see me as a fireman at minute 3:21 and 21:30. For the short time the firedoor is open, shirt sleeves rolled up are ok. Sometimes I even didn’t used gloves for shovelling. 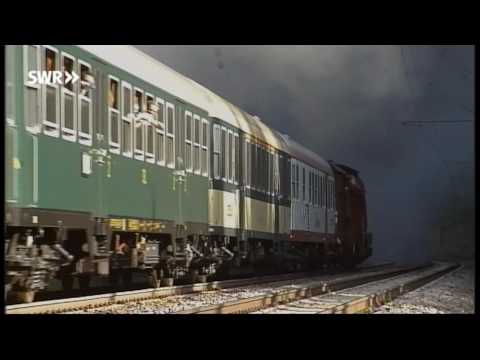 Sorry that this is only in german.

And sorry for beeing Off-Topic.

Machinery and fire… on topic!

Til; As JO and others will tell you I am always full of questions, and as I watched this video, many came to mind But you are new here and I’ll go easy on you. Wish I had had this before Christmas my daughter-in-law might have been able to translate it ( amazing but on other occasions she has tried to translate but it has been so long she gets confused) Very interesting. I saw you at 3:21 but 21:30 was the electric train. (I tried). One statement; to my point about radiant heat coming into the face of the fireman-- I see one persons job among others, was to open and close the door on the firebox as the fireman shoveled the coal in. Question; You shovel coal into the firebox in the cab in the back part of the locomotive. Then I thought it looked like they opened the front of the locomotive and shovel out the ash. Do they have some sort of walking floor in the fire box to move the fire along under the boiler? Thank you for the post. I enjoyed it very much. The trains at the end when all lined up and tooting their whistles, reminded me of our DOW get together in Argos. One night they line all of the trucks up and open ports in them so the “flare off”. As a great song goes-- “Great balls of fire!”.TomC

Hello Tom,
no worries about asking questions. Hope my answers can help you.
Oh, you are right, 21:30 is still the electric train. The short sequence with me starts at 21:35. My fault.
To open and close the firedoor for every shovel is to avoid letting too much cold air into the firebox. This would cool down fire and firebox more than necessary and create thermal stress. You don’t have to do this, but it’s better for your boiler. In former times, this was done by the driver as there was no third person. Not necessary because of the radiation heat for the fireman.
The firebox is in front of the cabin. The fireman has to shovel the coal on the grate by hand and distribute it by aiming in the right direction with the shovel. This is a kind of art at a rocking steam loco and a grate area up to 4.5 sqare meters. on bigger locos there is a mechanical stoker, because the amount of coal consumed was too much for a man to shovel.
From the firebox the hot smoke gasses go through a bunch of tubes surrounded by water through the barrel section of the boiler to the chimney. Below the chimney is the smoke box with spark arrestor. Here the fly ash is collected, and this is what you have seen.
As pictures can show it better than words, you can see a cross section of a loco boiler here:
Steam locomotive - Wikipedia (go to boiler section)
Fire-tube boiler - Wikipedia (some sections about loco boilers)
Hope that was helpful for you!

Til; Again thank you for the information. I understand better why they called them “steam” engines. Very important for the water to be up in the steam or super heated steam to make them work. It also reminded me of when I was younger, I wondered how they could lay sheet steal plates together and rivet them so they held air/water/and pressures. I’ve become so complacent with “welding” that I’d forgotten about those thoughts. Much interesting information and engineering that went into old machines. I asked my daughter in law about your train in Carlsrue (spl?) and she recognized the castle but said the train must have been put in after she left. Time flies when you are having fun. TomC