Ok guys I am going to sell this first machine fully assembled and tested. I am pretty amazed at this machine’s performance for what it is. This is a great batch run machine that will run a range of engines from 10 hp up to the 22 hp Predator. I didnt run anything larger so I wont make any claims it can run anything any higher than the Predator Twin. Im asking for $1000.00 for this first unit, if I were to produce this machine fully assembled like this, I would offer them for around $1500.00. This is the $550.00 kit plus all the other components required to fully assemble roughly $300.00 additional and then my labor to put it all together.

It will come just as pictured below, shipping will depend on where you are at. But generally shipping will cost from around 200 to 300 bucks additional. Contact me here at [email protected] if interested. 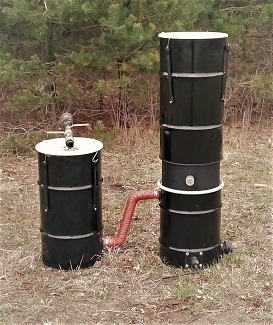 Looks great! Is this wood pellets only?

No this is a chip machine.

You can see the start up video here, this comes just as shown here in the video.

I hate to be blunt but I’m gona get to the point,
I don’t like to start like this but, I like your price n I can work with that however I’ll ask if you can look at our website n or FB Page, id like to go into more detail but the best place for that would be by email or PM,
I really do want to buy a gasifier but to say that I’m in a tuff spot would be putting it mildly.

To say that I’m flat broke is an understatement, but if it means I have to buy your unit, by all means.

Martin it is easy to $'s criticize for engineered fabricated set-ups.
Easy to claim empty pockets.
I own guns. I’ve owned lots and lots of different guns. Wifie does not own a single gun except the 20 ga side by side I’ve forced onto her. Wifie insists I pay for and maintain a pocketed cell phone. I hate this. Annual pay out is the same as one good gun; or lots and lots of shooting for fun and practice.
She says quite rightfully that that cell phone can order a jump start. A tow-home. An ambulance. Get me delivered a can of fuel. All things none of my guns could do without me turning into a marauder.
So it is easy man.
Sell one gun.
Buy the gasifier to make power for yourself and others.
(once was) three-gun packing Steve unruh

I appreciate your concern, though for reasons I can’t control,
Since I’m new to chat rooms of sorts, I might ask our friend Matt if he can add you to a PM I’ve sent him,
I think would easily summarize and explain further the situation.