Tracker toy for my son and me

Supporting Canadian manufacturing, even if it is second hand TomC

Got it from my gf father… he pulled some parts off it to get his fixed.

It would turn over but not start. Battery was less than 10 voltage. Boosted it with my car and it still wouldn’t.

Got my son to turn it over while watched under the hood. … accessory belt was turning… altenator is seized. … pulled the belt off at it started… I’ll take that… it was free after all.

I was driving around in Louisiana somewhere and I saw a jeep that guys were using for hunting. There is a lot of hiigh brush there and the Jeep had a pole seat about 10–12 feet high. Like this but, higher;
http://discussions.texasbowhunter.com/forums/attachment.php?attachmentid=581742&d=1387399691
It looked like it would be fun/dangerous to ride in that seat through the scrub. NOT for me.

Still not totally sure how or what we’re gonna do to or with its body.

Holy cow, that altenator is stubborn to take off. Got the top bolt out… no idea how the lower bolt is in there.

ive used the nut on the end to work the alt free and they work fine Chryslers are known for setting up but just the armature to the fields . rarely the bearings.

Installed a new altenator. Was fun putting the belt back on.

New battery and it fired right up… drove it up and down my brothers driveway a few times. Looks like the 4 wheel drive works even.

Once I get the body sorted out I’ll probably look at putting a gasifier on it for fun.

Can you answer my questions from the hangout last night?
Distributor?
16 valve?
Belt of chain to cam?
double or single overhead cam?
Thanks

Looks like dual cams. Coils over each sparkplug. I didn’t see a distributor.

I believe it’s chain driven cams. I won’t ever take it apart unless I have to. 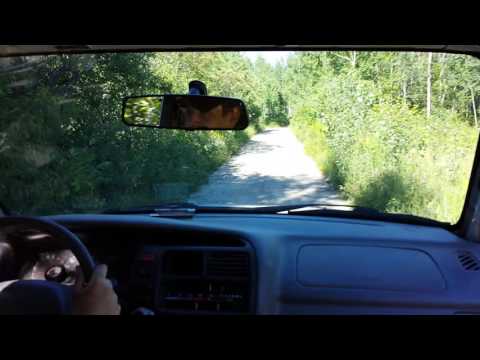 Little truck runs pretty good… idles real low ,like 400 rpm, once it warms up… anyone know if that’s normal for these things?

Seems father and son having equally much fun

Yup… lots of fun. Hey J O, wanna lend me a gasser to see how it works on this thing?