Anybody ever looked at tripower intake manifolds for use with wood gas? If you removed the center carb and
replace it with your gas air mixing valve you could use the two end carbs for driving on gasoline. 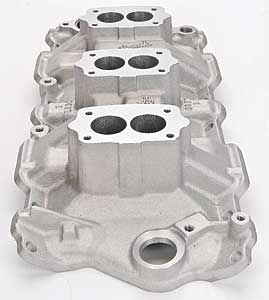 I don’t think these would work.
For the tri, The outer carbs run the outer cylinders. So running on gasoline, the center cylinders would be running lean. The center carb can power all the cylinders.
For the dual quad, each carb bore powers one cylinder exclusively.
Terry

Hmmm… could you modify a dual quad so they have a common plenum? I think some blower intakes are made that way… could be wrong, been a while since i worked in auto parts.

The tripower, in the picture, would be a progressive setup, The left side has a common runner and the right side has a common runner. They run on the center carb until you need more power, then the two end carbs open up.
All the carbs feed all eight cylinders. Arvid, yes the dual quad would work if it is a dual plane intake but may not be as ballanced as the tripower intake, There are also open plentum types that should work OK.

I was considering a tunnel ram… these sometimes have a couple of 4bbls and large plenum for even distribution, but some are one barrel per cylinder. All are expen$ive too. I am planning to use a single plane intake and add some bungs for injectors before I put it on.

I would think that a single plane tunnel ram, with it’s long runners, would improve torque. Lots of stuff to try.