Hey guys, I need some guidance on paint choices for my two trucks… I will be using Rust’o’ enamels (a tried and true method), though I think the choices of colors might be fairly limited to a set of basic colors.

Anyways, I need to paint my 95 Chevy K1500 which is currently “forest green” with light grey interior. I know that green was a really popular color for the mid-'90s but I don’t see it on modern cars much. This is a truck I need to fix up and sell fairly soon so I mainly need to focus on sellability.

My second truck is a '93 Dodge Dakota. It’s currently (faded/peeling) black-on-silver two-tone with a blue driver’s door, and dark red interior. This is my long-term vehicle and eventually gasified.

I love Gun metal grey, but black is the best choice for woodgas since it get so darn dirty.

Here’s a link to the type of paint and available colors. http://www.rustoleum.com/product-catalog/consumer-brands/professional/high-performance-protective-enamel

Did anyone ever experiment mixing these colors together?

I haven’t actually tried mixing the colors but I’ve intended to. I’m sure it would work. If you go to the farm store you can get implement enamel which is pretty much the same stuff as rustoleum, but comes in some neat tractor colors, may give you some more options. Once painted a car ford tractor blue.

If the gasifier is in the bed of a truck my paint color preference would be black . You don’t have to be so careful with soot and tar .

If it is just a work truck I have no preference .

I used Rustoleum “Smoke Gray” over the peeling silver on my 92 Dakota. I cut it 75/25 with acetone and rolled it on.
Seemed like the right color for a woodgasser (though mines a long way from being finished).

Well BrianHWa you are actually answering yourself.
The 95 Chevy with the grey interior you want to do your best to attract a buyer. Dark colors are unforgiving on the leatest surface blemishes - makes these stand out. look around you and white, grey and silver hides many sins. Stay a green that would blend with the open door frames, and under hood will make you work so-o-o-o much easier. So whatever light color you do not have to mix/blend.

The Dakotas that dark red ALL interior drives the decision. Only exteriors colors that seems to mute this open the door shocker is exterior red or black. Your choice.
If you’ve never spray on interior color changed. Think twice. You will be forever retouching up the rub/wear areas.
Regards
Steve Unruh

I believe the method I had used was 75/25% paint/odorless mineral spirits and brushed on with sponge brushes. The marks self-level and disappear.

I was previously planning on painting inside the door frames as much was possible. I wouldn’t paint the interior at all.

I did just now notice that the Dakota is actually 3-piece two-tone: it’s black-silver-black currently. Both door frames are black throughout, except what is visible from the outside with the door closed. 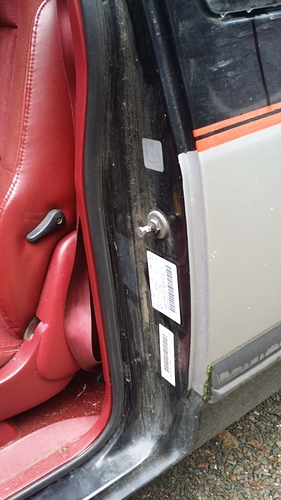 I rolled some of that tractor suppy paint on my old carb truck.The paint is hard to spray and not run unless maybe put thin med coat then repaint after max recoat timing, especually in cool weather,unless you have a hot shop too paint it in i would roll some on,or brush,or foam and respray in summer time,if desired.

I used “Woodsmoke Blue” on the Woodhawg. That was an actual color choice for a new 1963 Chevy Truck. Looks like grey primer with a gloss. Nice color, but slop from the gasifier really shows on it

Green on the chevy. With a color change you would just about have to pull the bed to get in-between it and the cab.

Black for the Dakota

OK guys been reading this post, can’t hold back anymore. First let me say I have painted many vehicles, there is no substitute for real auto paint sprayed on. Brian if you want to sell you can get the auto paint mixed and put in spay cans to touch up the bad places. Use the paint numbers off the truck to get correct colors.Buyer will like this better than color change brushed on.

Al, I definitely hear you on real, sprayed-on, auto paint being much better.

I don’t really have that option, for financial reasons, nor would it effect the value of the trucks enough to warrant the expense/trouble.

Maybe I should just leave the Chevy as is, with its few faded spots, numerous small chips (from ratchet-straps), and massive amounts of tiny scratches (from overgrown brush on old logging roads), and take the hit in value?

take the hit in value?

I learned a while ago that you seldom see money back that you spent fixing up either houses or vehicles. Fix it to the point where you’re not ashamed to sell, then let it go for a fair price.

Spend your time and money fixing things YOU will keep and care about.