Truck Powered Chunker, would it work?

When I first made my chunker I tried locking one wheel down with the brake and chunk from the other side. I had a 6 foot lever to attached to the brake but I could not put enough pressure on it to keep the wheel from slipping when making a cut. I think I even locked the wheel mechanly with chains or something ( can’t remember ) anyway I gave up on that idea and welded the spider gears .

I tried running the chunker without a flywheel and broke the pto shaft in my little tractor . I added a flywheel and have had no issues in more than 10 years .

Keep in mind this is a heavy duty truck rear end and axles from a simi truck .

Thanks Wayne. I think I can see a way to put a sort of spacer into the cable tension adjustment mechanism so that only one cable tightens. I think then I’ll be able to just step on the foot pedal in the cab.
I think maybe the pto shaft in your tractor was not designed with shock loading in mind the way a vehicle’s drive train naturally would be. Now that I think about it there IS a flywheel incorporated into my driveshaft, perhaps its purpose it to protect my transmission.
The dairy farmer I used to work for up in Vermont used to tow hay wagons with his '73 F150. The hole in the bumper was too big and the holes in the wagon tongues were too big, so it would bang when he would speed up or slow down. Someone once told me he stupid for towing hay wagons and was going to ruin his differential that way. But it didn’t so happen. He finally traded the old rust bucket for a really big bench vice in 1987. One of the frame rails was bent just behind the cab and one of the twin I-beams was also bent from when he hit a stump. The truck was a POS. But there wasn’t much wrong with the engine, trans or diff. Maybe my 91 isn’t build quite as well. I guess I’ll find out.
Rindert

I have replaced a lot of rear ends in light duty vehicles from doing much less than the pounding chunking would do to them. I would b e quite nervous using a truck I cared about in this experiment. Especially after having had a chunker and seeing the damage it can do to a really stout frame.

Okay Jacob, i love to hear the voice of experience. Still I will make up my own mind in the end, and accept whatever responsibility of course.
Rindert

Totally get that, not trying to rule your life, way too many people trying to do that these days. Just warning, be careful

a tremendous amount of axial thrust in force.

Rindert,
Maybe I mentioned before but watching a chunker video I noticed they mounted support bearings on the rear side of the cutting rim. Anvil frame and support bearings in one piece would mean zero axial force. Just saying.

Gets a little scared that I made this too small, when I read your comments.
@Wayne , did your pto axle break or was it in the tractor axle broke? 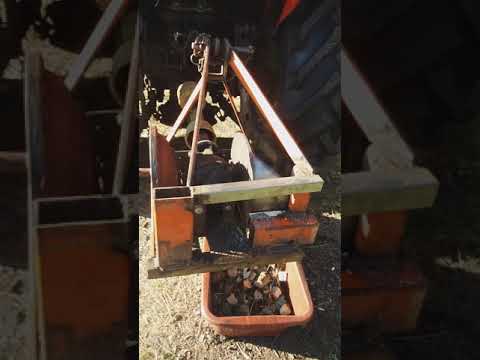 I wish I could do a drawing like Steve’s but I was thinking of something pretty similar. First off, you can put a locker in you diff. I have Detroit lockers front and back in a mud truck I did years ago. My idea was, as I said, the same as Steve’s except I would weld a pipe shaft attached to a wheel and bolt it to the truck. I would build a frame with a shaft mounted in two pillow blocks. At the back of the frame I would weld a hub on the shaft and mount a water filled tire as a flywheel and run a belt from the tube extending from the truck around the tire. This would drop the rpm’s of the cutter. Tell me where I’m screwed up because I’m thinking to building this soon. The only issue I can see is getting the pipe attached to the truck wheel perfectly straight and not wobbling.

did your pto axle break or was it in the tractor axle broke?

Keep in mind my tractor is a small 2 cyl with only 20 HP. With the use of a heavy flywheel I think one can chunk with less than a 5 HP power source .

Thanks for the video , seems your chunker is doing good

Wayne I feel your pain on the PTO shaft. I broke the shaft on my AC D17 a year ago or so. In my case it was just half a century of heavy farm ussage the splines where literally half gone on the 540 pto shaft and the shaft had and old crystalized break just outside the oil seal at the back of the tractor so it was just age but the replacement process wasn’t much fun. I was a little lucky in that I could fish it all out without splitting the tractor but it definitely made me think twice about abusing the tractor with a attachment that doesn’t have a slip clutch or sheer bolt.

Hi Tom,
I like your idea with the pipe shaft, I think. I guess you already know but we usually machine things after. I once saw a guy carefully place a piece of work on the bearings for a lazy susan. He then put an angle grinder in the bench vice and was able grind the surface of the work piece perfectly round. There are a lot of ways to make make shift lathes. Heck at the brake shop they will bolt something onto your car and machine your rotors without even taking them off. I hope this helps.
I think the tire filled with water would not work as a flywheel because the water would still be able spin (or not) independently of the tire. Farmers load tractor tires to get more traction and that works, but they don’t make good flywheels that way.
I can make drawings so I do. But that’s no big deal. Just draw something with a pencil and paper, take a picture of it and post it here. That’s the way we usually do.
Rindert

Old tractor weights might make a good cheap flywheel. The farmall weights where one piece and I think 150lbs each for the M and H and less for the smaller C IIRC. It has been a long time since I even thought about taking my H apart to rebuild it. Too many other projects.

How about filling the tire with pourable grout. I did the motorcycle tires on my saw mill that way? I just thought water so it could be drained and reduce the weight to move it for storing.

I recommend being careful about balance on any rotating thing you make.
Rindert 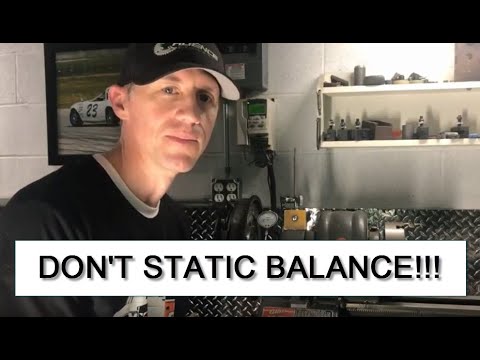 Wow. Watching that in the car. Later at home closer look. Just what I need for my ventilaters. I use a wheelbalancer now but that is not so accurate.

I watched this twice and never did see the link he was talking about and what the machine was that told him where to set his weights and what maintained the balance after the nuts were removed.

My saw mill is not set up to run right now because I’m planning to fix the saw carriage in place to hook up a line from the gasifier to. I’m just going to feed the saw with a moveable log carriage now so I need to double up the length of the track. Anyway the blade wheels turn at such a low rpm that I have never noticed any significant wobble. I figure the chunker flywheel would be the same. Major difference between 7000 rpm and less than a hundred for the chunker. Thanks for posting the video. My engine building days are probably over but I like to watch what other people are doing.

Okay, so I looked on craigslist and found a free rear end from a 1995 Bronco. The guy said the carrier was busted, because he had been running 35s. Not exactly correct. The end of the pinion was cutting into the carrier.
Anyway, I see now why Wayne needed to weld his spider gears. Those long, skinny axle shafts will want to vibrate like tuning forks. The only thing that prevents this is the fact that they are solidly connected to the pavement through the tire. That rubber tire absorbs all the vibration. Without that rubber tire and its connection to ground the shaft will torsionally vibrate. This will load and unload the shaft’s splines, accumulating millions of stress cycles in a few hours, and they will break off. But with the spider gears solid welded to the shafts there cannot be relative motion between them. The vibration energy will be dissipated in the oil film between the spider and carrier gears.
I’m thinking maybe a big flywheel, like the ones on square balers, might be what is need. But it would also be good to have a rubber element in there. Perhaps something like the rubber spider in a motorcycle’s rear wheel. Or perhaps a very big harmonic balancer, like 100lbs. I know there’s software out there that can model all this, but I’m not trained to use it. What do others think of all this?
Rindert 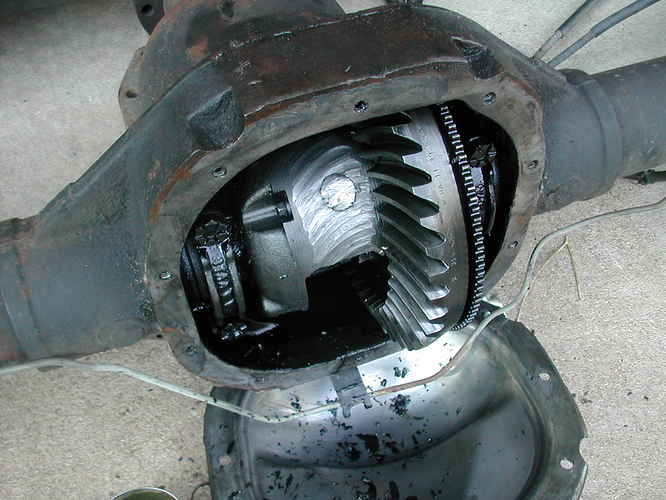