A Kohler R series generator is coming up for auction that has the above engine. Just how bad are flat heads with wood/char gas? I remember hearing a small flat head running on wood gas at Argos, had a nice sound. This one is 30 plus HP and set up for NG. If the price is right i’ll get it anyhow, love old iron. It’s a Wisconsin engine.

Hi Jeff, If ya think about it, that’s all there was in the 1940 s when Europe ran on wood.

Being a natural gas engine it will have a higher compression ratio. I bet you could smooth the radius in the ports bc and unshroud the valves a bit to make it flow better. Multiple cylinders are on your​ side. It should be large enough to even at reduced power light up your world.

Al, that has crossed my mind. It’s a low rpm and long stroke so that might help.

Jim, it sure is an interesting engine, just might suck up more gas but I bet I could do some welding with it.

The problem is that if it lacks a lot of power and sucks a lot of gas the less I would bid on it. Hmm.

Jeff, I had a 10 hp Briggs side valve engine running on charcoal in my little lawn tractor at Argos last May. Is that what you were referring to? 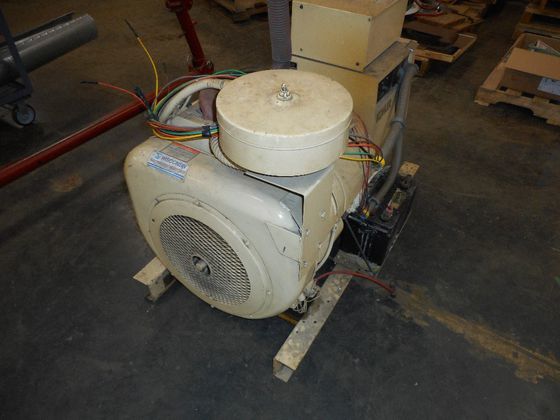 How did it perform?

It had so much power that when I let out the clutch I laid it on its back!

Jeff, I have run five different single cyl engine’s on char gas, all flathead. I feel three performed very well and two poorly. I have a 4cly air cooled Wisconsin in my skid steer I really want to test my hydraulic chainsaw on char gas just to know in an emergency situation it is an option. I have also been gathering 1800 RPM generators​ from 2500 watt to 15kw but haven’t tested any of them on wood or char but will as soon as it warms up around here.

It had so much power that when I let out the clutch I laid it on its back!

on that note, I’ll hide in bed the day of the auction…!

I would between now and the auction be scowering Craigslist for welders and generators to have a good idea of price and options in your area. Sometimes you get a deal at an auction but don’t forget the sales tax and buyers fees at auction. Sometimes they can really take the sweetness out of the deal.

I hear ya Jim. I’m not planning on paying top $ for it. Not even looking for a generator but if something comes up?? An engine like that would make a nice mini sawmill.

I don’t know about flatheads, but it might be -really- interesting given it is set up for NG. If it came from the factory that way, it probably has a higher compression and potentially metal a bit more resistant to the acidity.

Flat heads are fine with me. Lots easier to clean up if something goes wrong.

A friend and I both run on woodchips and charcoal using 2 cylinder Onan flathead gensets and we think they do pretty well. These engines are 1800 rpm sets. The friend also has a Case garden tractor with a 2 cylinder Onan B43G (I think) that runs up to about 3600. It works very well on charcoal.

Jim-
It shouldn’t be too hard to mill a low compression head, should it? Somebody on smokstak must know how much to take off. I have avoided higher compression since I start up on gasoline.

Pete even the higher compression heads are relitivly low. I am not sure but I think like 7 to 1 for the high compression and 5.5 for the generators. Please don’t hold me to these numbers but I think they are correct or at least close.

Those numbers are right in the correct balpark I actually thought the high end was a little lower. The trouble with the onan motors is once they get blow by you might as well scrap them because the parts are just crazy expensive. I priced out a rebuild kit for one at over $1000 usa. I have 4 of them 2 from case 446 and 2 from 448. So they are the newer 16 and 18 hp motors. I am hoping one of the 16 hp motors has enough compression to make it worth fixing. Otherwise the Honda clones from China are cheaper for a new motor then parts to fix an onan.

As to boosting the compression the flat heads don’t allow you to boost it much because the valves are offset with dead space above them beside the pistion so the geometry just requires that the compression has to be low.

You are correct that they​ are crazy expensive when it comes to replacement parts. I started collecting old generators a year ago. Every time I get a new model I begin the search for another of the same.

I have 3 flat heads about 7 HP Kohlers that I’m planning on taking to the auction but started wondering if I should. Was going to keep the 12HP. The Wisconsin engine is expensive to overhaul. I think the 12HP Kohlers are more affordable.

With the expense to repair and low compression maybe I’ll skip the generator and haul the Kohlers to the auction. Make room for other junk.

I don’t know what the repair costs are on Koehler motors as I haven’t owned any. But I have a friend who is always looking for them for projects he claims they hols up the best.