I find that a lot of my normal day to day driving is around 5 mile segments. With the time and fuel involved are short trips like that still a viable option for Wood-Gas?

I also have noticed most statistics being based off of level/flat surface for operations. For any of my longer trips those pesky Rocky Mountains make it dificult to stay within those parameters. Ranging from 4.5k miles up to 10-11k miles back down to 5k miles in elevation is pretty common. Doing 25 on the Interstate while trying to go up Vail pass will not impress anyone.

Well you’ve picked about the hardest tasks to accomplish with woodgas. For short trips you will end up wasting a lot of wood heating up and cooling down the system, and you’ll burn a lot more gasoline per mile driven with all those startups. I’d set the minimum trip on woodgas to be 10 miles. That can be a round trip though, depending on how long you leave the vehicle. If it’s a 9-5 job less than 5 miles away, then maybe you should ride a bike instead.

Hills are tough, at least going up. You need an overpowered lightweight vehicle to climb hills fast using wood. Most of us just use a little gasoline for the big hills we encounter, or accept going slow. See this video with a 5,000 lb Dodge climbing a mountain outside Dunlap TN - probably nothing compared to the Rockies, but I made it up at about 35MPH using woodgas, with a little gasoline at the end. http://www.youtube.com/watch?v=Ox-MxZdDGfI

I agree with Chris, there are situations that woodgas is just not a good idea.

Also keep in mind that wood is cheap but not free. The price of wood fuel will depend on how available it is , means of preparing it and what you consider your time is worth.

We could factor in a few more items like pride of independence and not having to follow the herd.

I usually put my window down and pull over on the shoulder and keep rolling and beat on the side of the driver’s door like “get along little doggie” and wave people past me. This also shakes things down. Most folks around here know what I’m doing including the sheriff deputies and state patrol guys / gals. I sometimes refuse to use the liquid. The hills are usually a mile long or so. I’m not sure of the grade but I’d guess around 6%. I will check one later. I did have a bad experience in Grant County. I was driving on the shoulder and they had been grading it and they left a huge pile of gravel on it over the crest of the hill and I could not stop or avoid it so my 91 olds flew over it. Didn’t need a grate shaker on that trip. This latest unit of mine starts up pretty quick and the truck is running on it in a few hundred feet typically and sometimes will start on it but even in 5 or 7 miles it is not accumulating any real condensate. I haven’t driven it much further yet with the new cooler so won’t really know till I do the Indiana trip. When I had the dodge intercooler on it, it made a pile of condensate on any drive but the intercooler plugged up with soot in around 200 miles. It has a pretty standard imbert type hearth and the upper part is insulated with ash and the lower part has a collar with no circulation and then the gas runs through an exchanger to preheat the air to the nozzles. It is self limiting. I don’t run things balls to the walls like the “boys” down south are doing. Mike

I checked the hill from the bridge below my house to the top of that hill towards Mineral Point and it is around a 4% average grade. It is around 6 tenths of a mile on that one. After that I have a long downhill that I use to stoke things up and then a long flat, but uphill stretch and then the long hill climb up to the airport which usually goes OK, usually 40 to 45 or so there. I have been able to make that first hill at 50 mph a few times if I hit it rolling but it is usually 35 to 45 as I’m starting from scratch here. The hill going into town the other way and the hills through town are steeper but I can’t drive over 25 or 30 that way anyway because of the speed limits. The hills on the roads that follow the fixed section lines west of here are for sure around 6% in many spots. I have my test routes. Coming back from Mineral Point I can usually make the airport at around 45 after a mile upgrade and then after the airport I can get up to 70 or so but have to be careful because the coppers sit in this stretch and then I hit the last hill and it’s a hard call, but usually around 25 or 30 cresting that and then it’s on the brakes at 55 to the bridge and home. You just get used to it and shift gears when you have to. I love to let the engine get down to around 500 rpm so I can hear each cylinder pop or go whoosh. That is one of the nice things about woodgas and high torque truck engines versus car engines … Mike

This was a few minutes in the blue Dakota after starting up on wood. We went up and down and all around. I never noticed anyone tailgating I was too busy holding on for dear life. It was a damn roller coaster ride full out all the time. 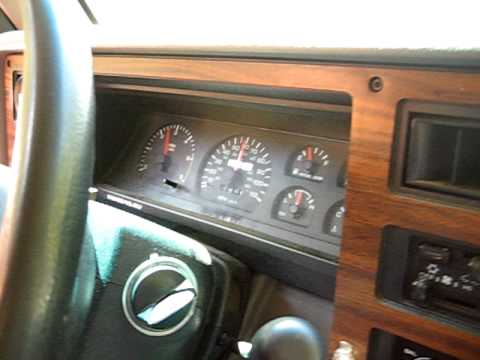 The 5 mile thing is a little rough. No such luck with a 9-5, I work swing shifts for a Hospital, before that I had a little souped up Scooter I rode to work, but factor in stops lights not registering after Midnight, the bars closing near my exit time, and snow and the Scooter has been in my garage for a year. Looking at a 500cc motorcycle for when not inclement weather. But my during the day 5 mile trips are for preschoolers. Not sure if I could leave the vehicle running at an elementary school without causing problems but that could allow for a continual 10 mile trip.

The elevation thing can be pretty serious. I have already blown an Engine going up one pass a couple of years back. Truck Trend refers to it as " the infamous 12-mile, 7% ascent to the Eisenhower tunnel in Colorado." in one of their heavey Hauler test issues.

PickupTrucks.com uses it as one of their testing spots: “Our second major climb was the eastbound ascent from Dillon, Colo., to the top of Eisenhower Pass on Interstate 70, the highest point in the U.S. interstate system. The grade starts at approximately 5 percent for two miles and then increases to about 7 percent for the remaining six miles, to the entrance of the Eisenhower Tunnel — the highest vehicular tunnel in the U.S. It’s perhaps the toughest stretch of road a loaded truck will encounter on a major cross-country highway; we call it the Nürburgring of pickup trucks because nearly every bit of towing and braking hardware is stressed to the max for many miles at a very high altitude.”
http://special-reports.pickuptrucks.com/2011/08/2011-heavy-duty-hurt-locker-eisenhower-pass-climb.html

And that is only the Eisenhower Tunnel, Vail Pass (10,666ft; 7% grade) is the warm up prior for when I head East from Grand Junction.

Thought I had found an interesting F150 but noticed it is Manual not automatic and not hearing much of people running that transmission. Most Dodge’s (heck most pickups in general) go for a pretty high premium around here due to them being a big social status for Highschoolers and a working truck for everyone from Oil Riggers to Ranchers…

… so there is an issue using a standard transmission? I am betting it is mostly preference. My chevy has a manual 5 speed, it also has everything else going against it too. The little truck has a 4 cylinder 105 HP enging that I know is going to be to small but you have to work with what you have, right? Oh, and there is no real hills here in eastern Virginia.

My mixing valve cable is right on my 5 speed shifter in my Ranger and the truck does fine. My only beef with the truck is the dual overhead cams with long timing chain = short life of the chain since I had to replace it at 50k miles and the plastic intake. I would not use a four cyl engine on the highway for too far, but it is ok for constant 50-60 mph in my opinion and you can’t pull much either.

I think manual vs automatic transmission is personal preference . I know that Mike LaRosa likes the manual but most important is what ever you already have .

With the exception of my very first test truck I have always used auto trans because they were set up that way.

If someone has two throttles then it is important to have an automatic.

I was out welding real early this morning before the winds start. We have a wind alert for the day and no welding out in the open after it starts

Hello all,
I just kind of jumped in here… I guess I need to drop the bucks and get the “book”. There is sooo much to learn about this. The use I have for the truck will be commuting, I drive 50 mi one way to work. It is open road, 60 mph all the way. I think I have about 6 traffic lights all on the back side of the trip, last three are within a mile from work.
I think having little load change will go along way for getting out on the road and just “going”. I figure if I can prove this out with the small truck, I will get something bigger next time around. The eight cylinder trucks are comming VERY available around here.
Ok, I am going to toss this out there and see if I get fruit thrown at me… I beleive I will be running charcoal in my gassifier. I know that puts another twist on things but it also cures some local issues that I have with fuel. We have an over abundance of pine around here, I am cooking off the pine to use for other fuel around the house/shop so why not use it here too. This charcoal operation is rather large, I am not making it in a drum. I can do about a pick-up truck load at a time. However, I am seeing that the dry fuel will need steam or water vapor added to get the hydrogen level up, but I don’t see that as being an issue.
I looked ar Gary’s video and he doesn’t seem to have many issues with his rig (nice Gary!). I don’t think anyone else is running a gasifier close to his design, is there?
One other thing, I am not sure how Gary is doing it (hint, hint) but sizing the charcoal should be lot easier than chunking wood.
Any opinions?
Jeff

The wood blocks turn to charcoal in the gasifier.