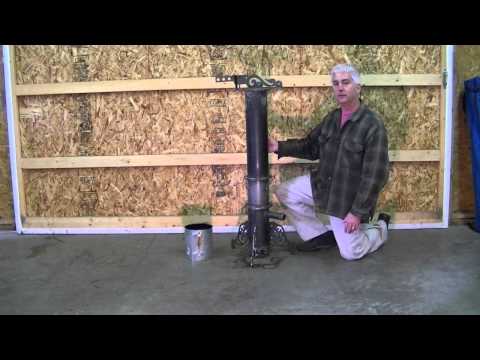 I just came in from tearing down the newest Victoria. So far so good. Most of the things I wanted to achieve seem to be happening.

1.) Nothing melted. That is a good thing.

2.) From the metal appearance the tar is obviously burning in the tar flare, away from the charcoal. I was hoping the tar would ignite on contact with hot air like in a Diesel engine. That seems to be happening. The tar flare was perfectly clean. No tar had been able to condense on it and the metal was shiny oxide gray.

3.) There was no smoke or tar gas in the fuel hopper when I added fuel. That also suggests the tar is being sucked in and burned.

4.) The tar flare was clean. It didn’t have any charcoal bits plugging it up.

5.) The machine had plugged, but that was my fault. I ran an experimental four bar grate instead of the usual three bar. Live and learn. I was trying to reduce slipped char but it worked too well.

6.) There were no signs of leakage or internal burning from the ash clean out. None of my stuff uses gaskets. I use metal on metal flanges throughout my units so there is nothing to lose or wear out.

You wrote “I was hoping the tar would ignite on contact with hot air like in a Diesel engine.” Do you have an idea what your nozzle air temp is?
Sure looks like you have it going your way!

Hi Don. The tar flare “snorkel” had obviously seen some heat where the gas enters. Based on this article:

The autoignition temperature or kindling point of a substance is the lowest temperature in which it spontaneously ignites in a normal atmosphere without an external source of ignition, such as a flame or spark. This temperature is required to supply the activation energy needed for combustion. The temperature at which a chemical ignites decreases as the pressure is increased. Autoignition temperatures of liquid chemicals are typically measured using a 500-millilitre (18 imp fl oz; 17 US fl oz) ...

If Diesel autoignites at 410F then I feel pretty safe in saying I had ignition in the flare. I am pretty sure that either the tar gas or the air was over that. Even the flare itself was close enough to the second stage to conduct heat and act as a glow plug.

It’s getting better. I just ran a 1.5 hoppers of PTO chips without a problem. Here is the flare.

It’s not the best color but the nice thing was that she was making almost clear gas the whole time.

Hi, what is the tar snorkel? Do you have an internal device to suck pyrolysis gas from the hopper into the heart?

Hi Magne. Yes. The new Victoria gasifiers have an internal tar flare to suck in the tar gasses and burn them away from the charcoal. The hot gasses then get fed to the second stage air.

Just thought you would like to check out my newest gasifier system: 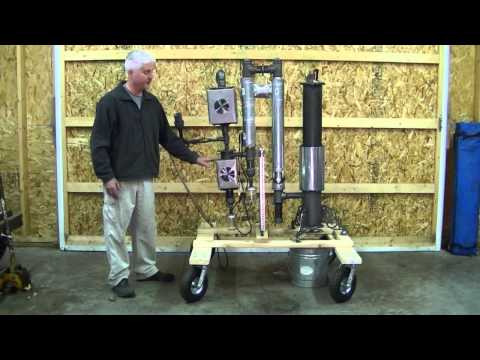 Here is a little video and write up I did for this year’s fuel making:

Making fuel for a gasifier in North America is a somewhat particular operation because of the commercially available equipment.  The goal is to make a large chip or chunk which flows gas readily to…

It shows that a trailer load of brush will run a 6kW generator for less than 37.8h as load is increased.

Thanks for the video Stephen. Just curious how big those chips are. Maybe you can hold some in your hand in the video? We have a three point hitch chipper too. So just looking for a comparison

These are my PTO chips in an 8" pie plate:

I just put together a quick page with an embedded spreadsheet for calculating the required flow of wood gas in a system. There is a vehicle and a generator section. The approach may surprise some people. Here is the page link:

Often people will try to calculate the flow in a wood gas system by doing some variation of multiplying the engine displacement by the operating rpm.  I feel this is fundamentally wrong because it …

StephenA I like this a lot.
Thanks
Steve Unruh

Thanks Steve. I’m glad it made sense to someone else and wasn’t too off-the-wall.

Now that my shop is cold I have been working on the automixer. For those of you who are unfamiliar with it, it is an arduino shield which accepts the output from an automotive oxygen sensor and modulates a model airplane servo and valve to keep an engine’s mixture at stoichiometric. Here is a picture before I install all the components on the board.

Here is another shot of the board:

My hat goes off to any professional circuit board designers out there. This was my first time stumbling through the process. I didn’t get everything correct on the first try but it’s pretty close. Hopefully it will be correct and tested by April when we all come out of hibernation.

I’d have to take my hat off AND my shirt.off. At least you got the guts to try it

Hi Don…I am just too ignorant to quit. It’s like my old drill sergeant told me, “If at first you don’t succeed, keep suckin’ until you do succeed!”. Nothing on that board was all that bad. Now if I had just made the wire connector holes 1mm instead of .031 so it all assembled, that would have been something!

Thats pretty cool, you manufacture the entire board?

So does this take the raw 12v signal and convert it to 5v for the arduino input?

So far Im having very good results with our Arduino set up.

Hi Matt…Yup! I made the entire board.

The board takes in 12-24V and converts it to 9V for the Arduino and 5V for the servo.