This look familiar to anyone? My son-in-law spotted it on the street in Montpelier, VT. I thought the thing on top might be an H2 bladder but he says it’s a Thule Pod.
I looked up water fuelled cars on wikipedia and there are a number of ideas out there. I’m still a believer in the second law of thermodynamics though. 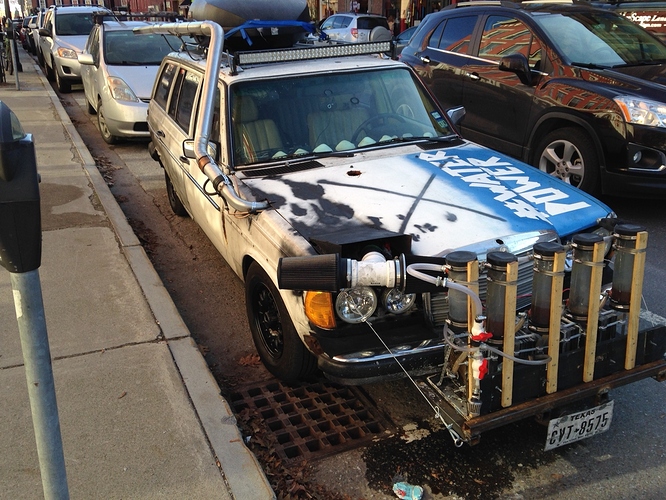 The sad thing is, that apparatus is almost as big as a gasifier… and likely isn’t the main source of fuel.

I bet my gasifier makes 100 times as much hydrogen as that setup. With less of a Mad Max vibe.

No,no ,no please don’t put hoh in a title block; the over unity gang will come out of hiding! And someone will yet again drag Tesla into it somehow!

That might not be standard hho,The best i was able too do was 8000 watts too barely idle 1.0 geo metro,pluged intoo the wall with 120 - 9"/9" plates with 1" gaskets, all i got was 70 percent efficiency on my home built cell with 304 SS.
that was getting about 35 lpm too idle,before the plates got dirty and slowed down on production.I like the wood gas chase much better,less time too maintain , proven science , No scam No Bull

the sad part about the HHo generators is the fact that all of those units are producing hexavalent chromium and there builders /operators haven’t a clue and are just dumping it on the ground when changing out there electrolyte solution.