Today I made the switch for Acetylene to propane. I had to get some Mig wire and while there I saw they had propane cutting tips. We had talked about it and I had a small tank of propane and I decided to give it a GOOD try. I bought a #2 tip. Hooked it up and tried it. First off, I didn’t like lighting it. With acet. you just get a loud pop and it is lit. This propane would not light. My sparker wasn’t to good so I reached over and picked up another one. The propane didn’t light again until about the third strike. When it did it was just a big “soft” flame that engulfed my hand half way to my shoulder. It diapered very quickly and I processed on. Set the flame up and proceeded to cut a 1/8 th in piece of scrap. It cut beautifully. I cut several pieces and all cuts were very clean. One comment, I was cutting without gloves, which I often do, and my left had ( guiding hand ) got very hot, ’ till I put on a glove… I shut it down and tried to relight it and I the results were about the same, with a big soft flame engulfing my hand. TomC

Hi Tom
Turn the gas on and add a little oxy to it. with a little practice it will lite with a pop then just give it more oxygen and your ready to cut.

Hi Tom, I burned the hairs off my hand the first time I started it. Next time less gas and OK. Tweaking the valves and regulators seemed to help over all. Like everything it takes some time to find your propane legs. 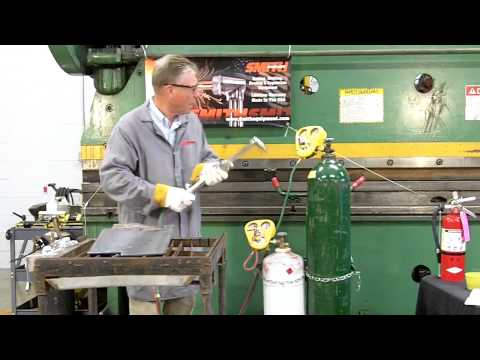 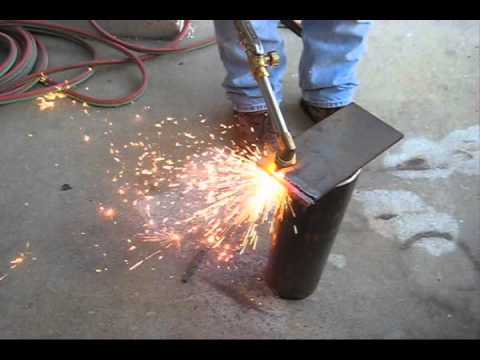 At our machine shop we switched from acetylene to propylene and we’ll never go back. The torch is used every other day and what used have the fuel replaced every month went to an annual change. The bottle is a foot diameter by 3 foot tall and next to a standard 4 foot high oxygen tank. You’ll think someone is sneaking into your garage and filing your tank. 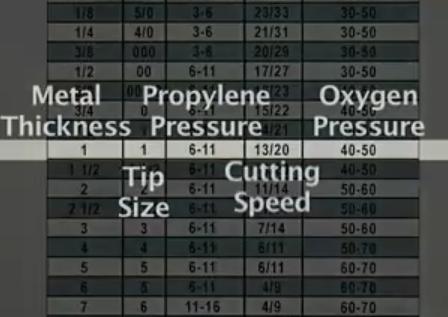 Converting your Oxy-Fuel Cutting setup from Acetylene to Propylene...What?

The only thing bad with propane is that it eats two times the emount of oxegen,then again the gas last all most forever,i use the regular 5 gallon camper tanks of propane.It cuts the thicker steel when i dont want too stress test my poor man plasma cutter.

Thank you all for the positive response. I guess I didn’t need encouragement after the first try, but the suggestions certainly encourages me. I hope some of you that are still using Acetylene will see how easy it is to convert and how well it works for cutting. Hmm Now how can I gas weld and braze???TomC

Tom, as I understand you can braze. My Henrob 2000 torch web pages says you can weld aluminum maybe even better than acet. But the welds are too brittle for common carbon steel. Acet has a natural CO2 inert gas around the flame to protect the puddle or so they say…

Jeff have you used your Henrob with propane? I have not with mine. I have a little bit of acetylene left in my tank that I use if I need the Henrob but very rarely use it due to it being a pain to switch back and forth making it another tool in my box seldom used.

Couldn’t find much on a Henrob torches. One posted a price of $190 but didn’t say what I could do with it. Are you saying, I can braze with my old torches and propane and with a Henrob 2000 I could weld alumni with propane, but welding mild steel can NOT use propane?TomC

Tom, I think the Henrob torches now go by the name Cobra. I have never used propane with mine, don’t know if you can. I never gave mine a fair shake. They cut very nice but you must wear a glove. I seldom wear gloves for anything but is a must with these. For another $30 they have a heat shield but after giving them nearly $400 for the torch that I felt was misrepresented when sold I refused to give them any more money. When they sell them at shows they have about 4 set up differently so you don’t see the need for a different tip for every use. I found it to be a pain in the ass. With my Smiths torch I use the same cutting tip to solder radiators as I do for heating and cutting.

Jim, yes they sell a propane tip. I’ll order one just to have it if I weld up a clone engine head. I agree mostly with you about the henrob. But the low pressure welding spoiled me for thin metal. I don’t like welding with the standard high pressure torch. High pressure might be better for thicker stuff but then I just turn on my buzz box. I was going to sell the henrob but i’ll keep it just in case. Like you I hate switching over to it. It’s packed away in a box upstairs now. I did learn from it to have different size tips for my Victors cutter.

My Victors is rather tired and I was thinking about getting not a combo but a dedicated cutting torch so the middle doesn’t loosen up. Smith brand is looking good.

Tom, I would not advise anybody to buy the cobra henrob because the standard cutting torch is more advanced. The henrob is better at welding thin stuff because of the low pressure doesn’t blow through. A smart man would be able to figure out how to do that with a standard torch. I’m a welding smuck so used the henrob for thin stuff. But now I don’t weld much of any thin stuff. Exhaust gage pipe and up I use the buzz box. Thin stuff I figure out something else. You got me interested in brazing. I’ll have to try that with propane.

I use mine for brazing and welding with the cutting tip.
Just got though brazing carbide teeth in a mud saw blade it worked good.

I have torch welded alot with both Acetylene and Propane. I could never tell the difference between the two, other than the Propane may have taken a little longer to start a good puddle. The end result looked the same and the welds held up as intended.

Mostly used this process on truck / tractor exausts and light welding where stick welding was too heavy not appropriate and brazing was not strong enough.

That’s good to hear that I can still weld with propane. Thanks guys. I did read on a welding page that propane welds are OK if annealed because of being brittle. But that’s for fussy commercial stuff. Sounds like for our applications just do it…

Okay, I can’t resist. Being a newbie at propane cutting and welding, okay, I never knew it existed. Does anyone have a link on what to purchase that is reasonably priced? I’d hate to buy something to find out it’s not quite enough.
For the welding part, is it welding or brazing? What do I use for a filler? A wire coat hanger or a welding rod for tig?
I have propane in 20# tanks I won’t be needing any more so this makes it another good option.
How thick of metal will it actually weld? How strong?

Wowser!!! A lot of really good information. I am going to go out on a limb and make a statement especially in regards to B Schillers questions. We should just hook our acetylene gage up to a propane tank and try it with out purchasing anything new. Start with cutting. ( open the propane valve and the oxygen valve a little before you strike the striker) I bought a propane cutting tip for my torch for $15 and it worked great, but I might try an acetylene tip next. I haven’t tried welding or brazing, but I will say you can use coat hanger for welding but you have to have “brazing rod” with included flux, or a can of flux in addition. If this statement doesn’t jive with what you have said above please correct. Just trying to summarize a vary good discussion. Thanks everyone TomC

My favorite rod for Acetylene or Propane torch welding is bailing wire. Second would be a coat hanger when I am all out of bailing wire. Coat hangers are sometimes a little heavier fill if you are working with heavier metal that is still on the thin side, it can be an advantage.

Never Mig Welded yet…setting that welder up this afternoon. Looking forward to mastering this, hopefully without too much profanity!

Plenty of practice coming up though on the Wayne Keith for the Dakota!

Most Brazing rod is Flux coated, but you can get plain brazing rod and a can of Flux paste that you dip the end of the rod in while you are brazing.

I have used both methods, but for me the Flux coated rod is less of a hassle for general repairs. I’m sure others could weigh in as to why uncoated rod with the flux paste would be better and an advatage in other situations besides general repair.

Age and humidity takes the flux off of rod so it’s nice to have a can on hand. Heat the end of the rod and stick it into the flux can.