I haven’t seen this on here yet and thought it looked interesting. It is a good concept for an off grid setup combining heating with power generation. Figured I would share it here to see what others think about it.

If he can make all that work more power to him. I am always weary of the one machine does everything solutions. The functioning of gasifiers seems to be completely fuel and load specific with some flexibility but not much. They make good gasification boilers, and engine gasifiers already so trying to complicate it by combining functions is more headaches then I care to even imagine. Then comes the kicker at the end “go fund me”…

I have an idea.
What if we made a large solar thermal plant to make electricity and used the waste heat to preheat air and fuel for a gasworks?

What if we made it really small too so you can put it on the roof?

And perhaps we could make it portable so you could tow and power your car with it.

We could automate it too so that it looks after itself, and adds internet connectivity so it can talk to other gasifications systems around the world…

What if we made a large solar thermal plant to make electricity and used the waste heat to preheat air and fuel for a gasworks?

You should come see my solar carbon collection plants. They’re fully automated and low maintenance. They make oxygen and fuel for my low-tech gasworks, simultaneously cooling and filtering the surrounding air. They are somewhat portable, and you can power your car with them. They are quite versatile, they create food, warmth, shelter, shade, transportation…

Plus they operate totally offline, no internet connection required.

Hi Dan,
I saw this gasifier a while back and my first reaction was, “wow, that looks like a bear to build”. That aside, the important thing is the use of as much of the energy available as possible to promote the process in its entirety as you note. I have built a preheat air exchanger by encasing my cyclone in a larger tube and running the intake air through the larger tube. It works well as I have done some temperature measurements on trial runs. The bottom of the cyclone is exposed for emptying. Downside, if I have a problem with my cyclone I have to cut it out of the heat exchanger. Steve U also cautioned me to be careful or aware of the dewpoint so as not to get moisture in the cyclone. To date my cyclone has produced only bone dry ash. I think I read you were interested in heating water. I suggest that the exhaust heat from the ICE would be a good place to utilize that “waste energy”. I’ve also seen the suggestion to feed the ICE exhaust (mainly CO2 and H2O) back into reduction zone to supplement the CO2 and H2O already being generated in the combustion zone. That idea intrigues me, but…I ain’t got to it yet.
You can see my heat exchanger in the Small Engines category under “My first small engine run”, comments 47-57.
Pepe

Hi Pepe
Thanks for the reply. Yes I am looking at setting up off grid solar this summer. I am thinking of both solar hot water and electric. I have a lot of south facing roofs here on the old farm. I am considering a setup where I can have a heated room in the corner of the barn to store the batteries and genorator. With a hot water storage tank. The goal is to run the generator on wood so I am off grid and off oil for electric and heat.
I have also been wondering about the exaust idea as well but haven’t said anything as I have yet to even build my first gasificer. When I looked at Garry ’ s charcoal setup I wondered why the same couldn’t be done with wood. I just assumed it must cool the wood gasificer too much and didn’t give it a second thought.
I haven’t read your small engine post yet it is just a long one and I haven’t take the time but I will.

Dan when wood is made into charcoal the volitals that make tar are cooked or burned away. If wood were used in simplefire type gasifer the tars would not be converted by the char bed at the bottom of a downdraft gasifer. Don’t think an engine could stand that. Might work to burn as a heat source though.

I guess I should clarify I ment I wondered why the engine exaust couldn’t be brought back into the air supply of the wood gasifier. I agree the wood needs a different design to deal with tar.

I am thinking of both solar hot water and electric. 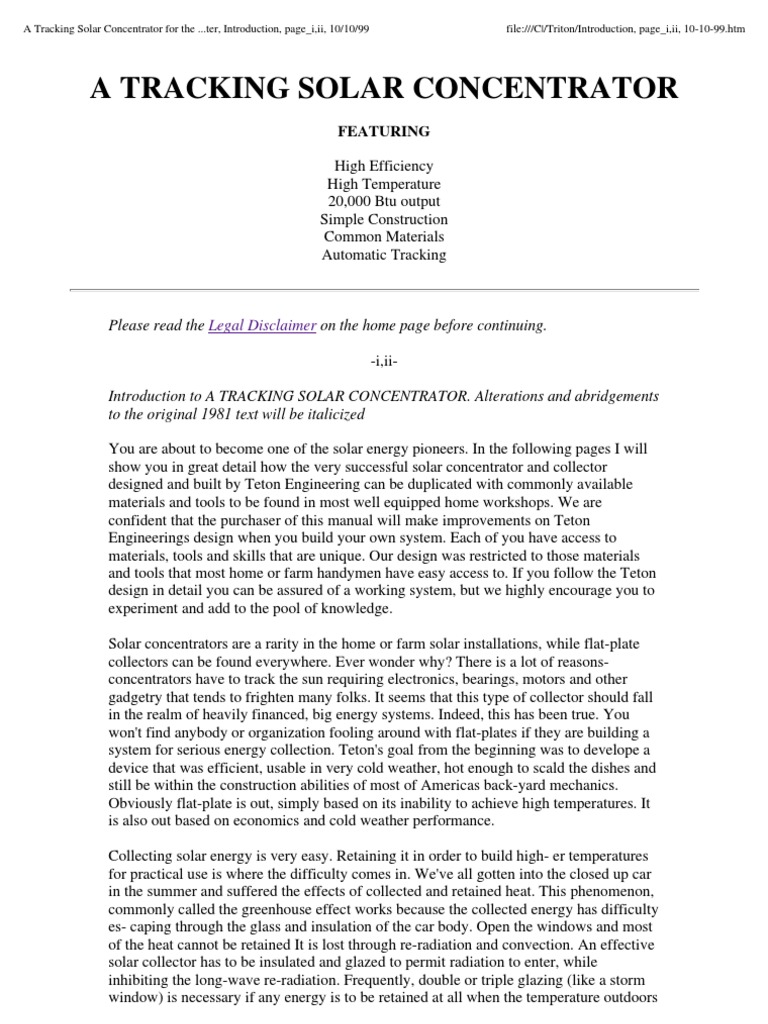 How to build a focusing solar collector.

On the topic of solar power for heating, here’s a concept I’ve been wanting to implement for years now, but haven’t had the time. A system along these lines could be used for heat or even steam. The Mother Earth News tracker eliminates any complex tracking system and any power draw. Periodic elevation adjustment would be needed unless a second system was used for that. Rather than the freon originally used, a commercial hydrocarbon refrigerant would be acceptable. The degree of concentration from a mirror array would allow practical heating even at cold air temperatures.

I have not seen that tracking system before very simple design I just wonder how long it runs without a pinhole leak. But very cool idea.
I do like the focusing mirrors for heating.
But I have been looking at a much simpler solution. There is setup where you run Pex pipe under metal roofing then put thin film solar over the top of the metal roof for solar electric. The idea is that the Pex loop will pull heat from the back of the solar array cooling the array and improving it’s performance.
There are a couple companies making the thin film solar now that claims they are about as efficient as regular panels. But I think the cost is really high per kilowatt. I have less concern about efficiency then cost because I have way more south facing roof then I could ever use on the order of 10 times more roof space then I need.
I just don’t like the idea of bolting panels on top of my roof. Looks to me like a system with an air gap to fill with ice and freeze up and break over the 25 year life span. One of the things I like about the water loop under the panels is that you could heat it to melt the snow off if needed.
That is the system I am considering but I think is probably too expensive.

MiaSolé makes lightweight, flexible and powerful solar cells and solar modules that can be used in a wide range of applications.

This is the one I was looking at.

https://www.niftyhomestead.com/blog/integrated-solar/
This has the image of the Pex under the metal roofing.

One thing I have yet to understand is why some links on here are in a box with sample of the website and some just come out as links.

have propane boiler and wood gas boiler one zone . First heating guy said " I don’t know how to install your wood boiler but I see that I am going to replace your whole heating system " . I hired someone else only company listed still installing this boiler paid $8000 for install kept whole original heating system . I put in thermostat connected to relay to shut off pump to keep house from getting to hot when using wood gas boiler .

8000 seems like a step price to add a boiler to a single zone system. The easiest but slightly less efficient way to do that would have been to just put both boilers into a single loop with the one zone so that the water flows through both boilers. The better way is to setup a zone loop on the wall where the boilers both come into the loop with back flow check valves and their own zone pump then a zone pump and zone valve for each zone. And yes you do need the electronic zone valves regardless of what the plumber tells you where you have more then one zone. With one zone I would probably just put the two boilers together and set the gas boiler to run at a lower max temp then the wood probably set the wood to run at 195 and the gas to 175. That way the gas simply won’t start unless the wood can’t keep itself up to temp. No extra controls needed. The down side is if the gas runs it has to keep the wood hot as well.

there is $2000 of antifreeze in wood gas boiler loop to heat exchanger . I paid way to much . they did not do work I paid them for . I did work that I paid for them to do . It came out really weird . But I works for me 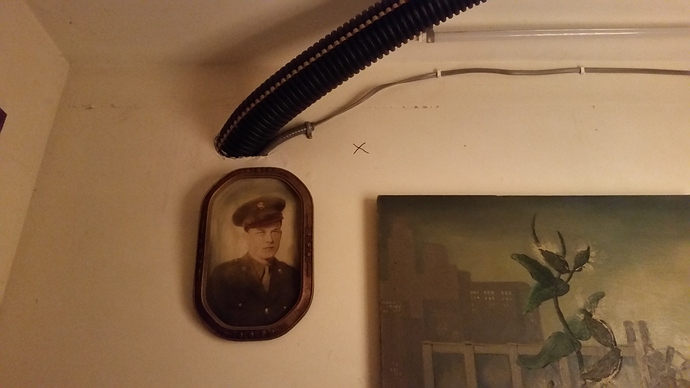 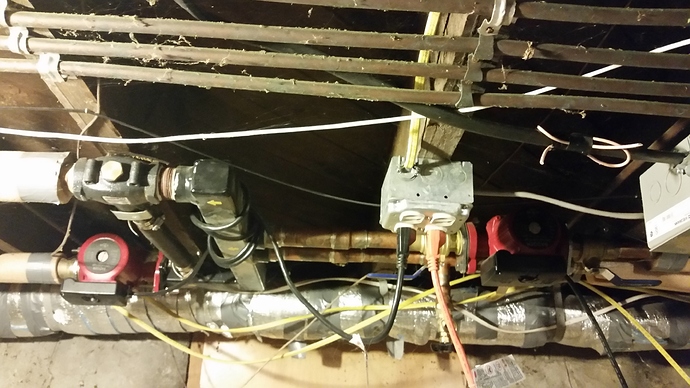 Why do you have antifreeze in the boiler loop? Is there a risk of freezing?
We have a 22 kw wood burning boiler with regular water in the loop. In fact l never hearedof anyone puting antifreeze in, exept in a heat pump or solar collector.

Good news on the air leaks Nick , its always good when you find the reason for something not working as it should .
When running my charcoal system, if I ever I have issues with no flare or a hard to start engine , then air leaks are always the first thing I look for first .

Antifreeze is common around here but it is done by people who have a second home and will be away from the house during the winter for a few days. The idea is that the base board heaters are very likely to freeze first as they are on the outside edge of the house. I have seen that happen to someone who was away for the weekend the rest of the house was not frozen just the baseboard in one room where more cold got in. 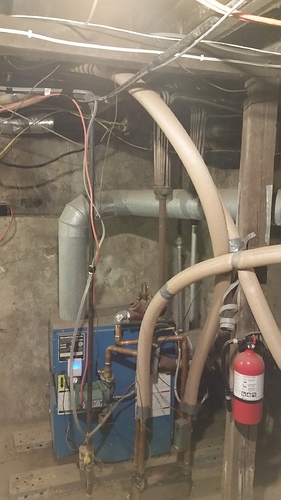 Two of three
there is an heat exchanger the wood gas boiler is in another building
when it was 15 below temp of boiler was 18 degrees . got boiler up to 160 turned on pump , pipes got very cold then very warm and this all made a sound 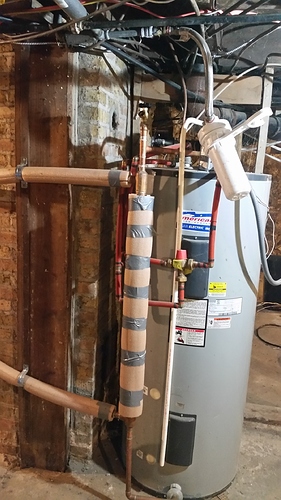 Three of three there is a heat exchanger , on the wood gas boiler side witch comes from another building there is antifreeze the non toxic type . the boiler inside the house has water . Before I got house had frozen lost pipes , two radiators patched one . Boiler still worked .