So, after getting the gasser up to heat this morning and it running down to where it shuts itself off I figured what the heck, there is a bag of softwood pellets sitting there from a previous experiment that failed horribly, why not give it a try again since this unit seems to be working better than expected.

So far, seems to be running good, and the engine is making excellent RPM.

I’ll let it run it’s self out and take a peek to see what the char/nozzle area looks like once it has stopped.

If all looks good, I’ll feed it a couple of bags over the next day or two. 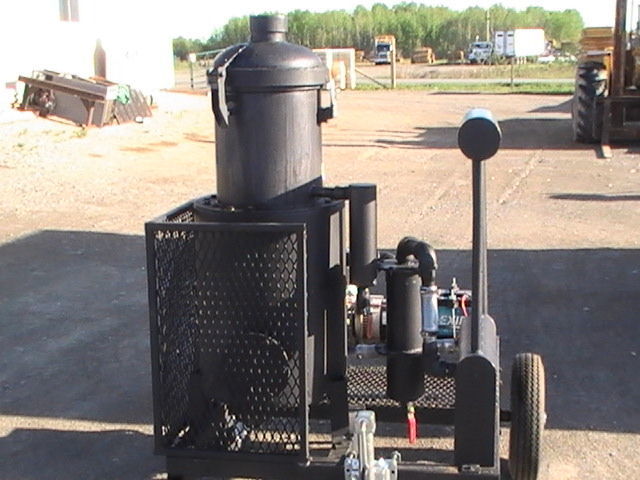 gotta say i’m impressed so far. a usual hopper load of softwood chips for us is just over 2hrs runtime.

The pellets seem to be making very good gas. no feeding issues at all. there is very minimal shaking from the engine but other than that we have no hopper or grate shaking.

I can run the little 8hp briggs up past 4000 rpm no problem.

Gonna get a couple of bags of pellets, restart it with a full hopper and see what run time i get. but, over all i’m impressed so far.

so, 1:52 pm, I refilled the hopper… well 35lbs worth… with softwood pellets… or horse bedding… as it’s used for up here during the summer months.

flared clean, engine started right up… so we’ll see how long it lasts that way and how much i have to play with the mixtures.

Keep ya all posted.

Howdy
Is there char left when it shuts down?
T

not sure why, but even running chips usually there will be char to just above the nozzle level… pellets seemed to work the same.

the look pretty good considering they’ve been in the hopper for more than 2hrs… i’ll put them back for they can wait their turn. i shut the unit down at 6:53… figured it was time to eat. Pellets were where i was hoping them to be anyway. Now the rest of the story… So you can see that the condensate was being led to pool right into the area surrounding the burn chamber. I am not able to say if any moisture got into the char bed, but the next day, it rained so the humidity was high. Anyways, after about 48 hrs, I went to start up the unit with all that nice char, and could not even get it to make a flare that would stay lit. Yes, I added new fuel and all, and the char got up to about 1,300 degrees, but I could tell that it was packed up.

When I checked the drip line on the filter train, It was pulling 7-8 inches of water, and it typically pulls 2-3 or less.

So the next day I cleaned out the chamber and saw that it looked similar to the photo above at the top, but was REALLY packed with lots of tiny pieces (almost like sand in size) rather than whole pellet pieces or really light ash. I have not burned much wood except in a fireplace and fire pit, but this pellet char seems to act differently than the natural wood char I use in my BBQ smoker…

So any ideas if this breakdown of pellet char is due to absorption of moisture (either from the environment or from the condensate routing) ?

Could it be from the pellets just sitting there hot for a while as the gasifier slowly cools down ?

I’ve used pellets as mushroom substrate to grow oyster and shitake mushrooms. I used the pellets as a sawdust substitute. When you put the pellets in a bucket and add water the pellets triple in size and then break apart into very fine sawdust.

These pellets are essentially compressed sawdust and have no linear fibers of cellulose like seen in wood i.e they lack any type of coherent cellular structure. So they readily absorb fluids swell and then fall apart. Wood blocks on the other hand swell when wet but their structure remains intact do the cellular structure.

I don’t know if that helps with your diagnosis. I thought moisture was always the big issue when dealing with pellets and the way to get around that was to use a mechanical feeding system and not a gravity fed hopper.

Thanks Dustin, that is what I have seen as well. In a gravity fed unit, it seems possible to keep the pellets dry so they dont swell up and crumble before their turn to get burned… I am trying to figure out what is happening down in the bottom of the gasifier, in the reduction zone or near the grate where the charred pellets are. The charred pellets towards the top look OK, but about half way down into the burn chamber, I started seeing more “sand like” grains or fines where the pellet char was falling apart.

This is kind of an experimental design, so it may be related to the choke plate grate I am using too since fines cannot just fall through - they have to be vacuumed out, so when it is shut down the hot pellets continue to be consumed (?) and eventually just fall apart in place and cannot get moving again. Just a guess and another excuse to run another test…

I did find that i did get some tar with pellets… I suspect i need to change my grate design to optimize pellet usage. subsequent versions will facilitate that.

I ran pellets and chips mixed half and half and found I didn’t have tar issues… I do get a lot more condensate with the pellets.

What did you end up doing with the grate here Arvid?
Is there a monorator on this unit?

Yes it has my version of a monorator