So I saw this youtube video about a guy who has a wood powered (I think) saw mill. I think this guy usually builds wood powered trucks. I think he said somewhere that he doesn’t have much expertise with stationary gas producers, but the one on his sawmill engine sure seemed to work well. I wonder how that gas producer differs from his truck gasifiers. 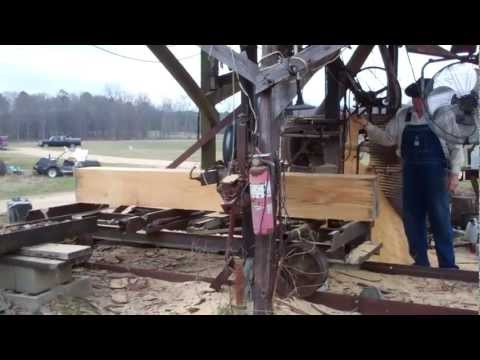 Sorry- I thought everyone would know who I meant.

Wayne’s sawmill is run off a Mercedes diesel.

Now I see. I shoulda known when he said Mercedes, but I assumed the large drum shaped stuff was a gasifier. I suppose its really an air filtration system.

I think the drum is a hydraulic reservoir, you can see the oil filter and the front-mounted hydraulic pump. The winch is hydraulic whereas the blade is run from the Mercedes gearbox and clutch.

Very clever machine, and operator. I’d like to be that smart one of these days.

I made the saw a few years before I got into the wood burning business ( about 15 years back ) . If the motor had been a gasoline motor I probable would be powering it on wood. The motor uses so little fuel that it seems to be no issue. In all these years of use I have never turn a bolt on the motor ( if it aint broke don’t fix it )

The saw looks pretty rough but I built it from parts I had here on hand. The only items I bought was about a half dozen small sprockets and some roller chain .

Out of pocket a saw blade cost more than the mill !!!

Nice rig. Looks like your customers don’t even need a planer!

Hi all, thought I would ask where everyone is buying new bands for their mills? I have a small manual mill that takes 12ft blades, thought others may want to know too. thanks Al

Here is were I get my blades

Al they make blades any length you want them.

Thanks Wayne,Jim, I will give them a try

The super sharp are what I use also .