Has anyone tested the acidity level of the “wood vinegar” (Hopper condensate, correct?) made by their gasifier(s)? Is there any reason to assume that it could be stronger than quality distilled vinegar (5% acidity)? I could think of several used for a stronger but still (mostly) non-toxic vinegar solution.

Feel free to move to Off-Topic if that’s a better place for this.

I use the condensate full strength to kill weeds and grass.

I have been told by some organic farmers they mix the condensate at 10% and spray on garden vegetable to enhance growth.

I found the below by searching wood vinegar.

I found my pH strips: 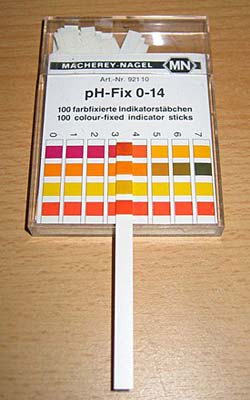 View the pH scale and learn about acids, bases, including examples and testing materials.

Carl, Did you just test straight condensate or the stuff that stays in the filter and distills into the rest of the system?. I leave my systems open when not in use to let things dry out. My last “good” cyclone rotted right through. Same with a few hoppers as well. Nasty stuff so I use thicker materials now … I liked your repair job on your unit. I hope it is working well for you … Mike

http://www.intergate.com/~mlarosa/images/woodgas/ouch.jpg
http://www.intergate.com/~mlarosa/images/woodgas/ouch2.jpg
just a couple of example pictures. The rest of it went to H in the next year. I still have it but it has aluminum tape on near the whole thing now. RTV wouldn’t work anymore. Of course I brazed a piece of tin over that hole but it just kept getting eaten up … Mike

I measured straight out of the hopper condensate tank.

Hi Carl, Hopper condensate is you know what. It’s full of PAH’s etc etc etc … I usually leave a black spot on the gravel shoulder when I reload. Being an old chemical engineer I figure this is the safest thing to do. It will get diluted or bio degrade. Some folks will throw it on a drying pile and re-gas it. When I designed industrial waste treatment systems in the 70’s there were always standards. Most of what did was cyclones, evaporators, and cascading rinse tanks. The cascading rinse tanks pissed me off. They would get things down to the allowed parts per (life) million and then pump the water right back into the ground to get sucked up by the next well down the pike. I had to quit that. Stay well, Mike