Woodgas videos from around the world 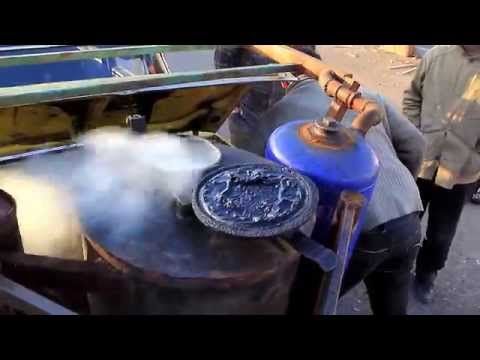 Thanks Dave and Brian .

I was able to find this article Back to the future through the past

A vehicle fueled by a wood-burning gasifier is not a new idea, but the way father and son, Bill and Guy Nixon, have made it work on their 1913 Model T might just be the wave of the future, especially if Jay Leno has anything to say about it. Bill... 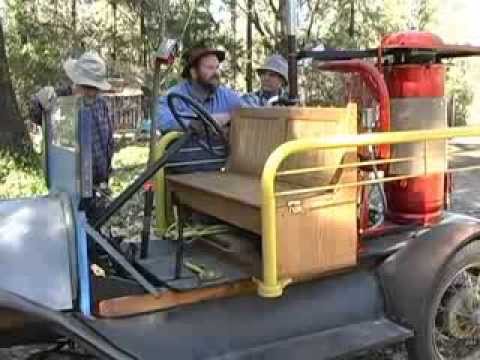 That was a fun video.

I loved the series of expressions on that guy’s face in the pictures. All the wood-gas-faces:

1.Scratching his head being perplexed,
2.being relieved when he figured it out,
3. SWEM.

A quite nice one from Ukraine. No clue what they are talking about though. But it looks that he is SWEM-ing, too 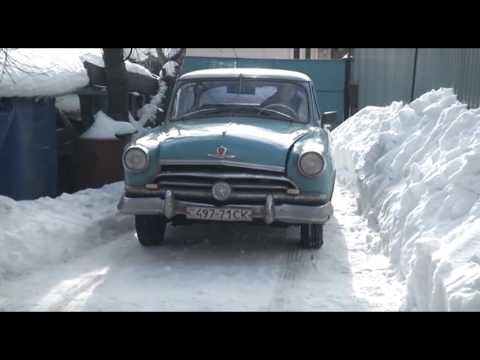 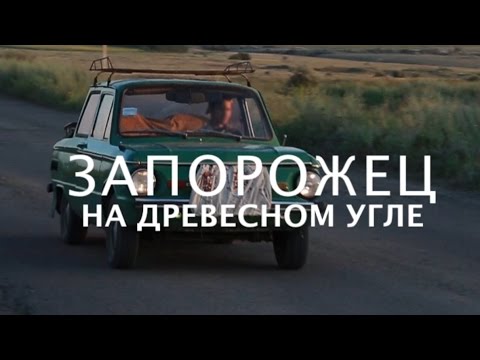 Hope you find it useful.

Hello everyone,
just found by coincidence a video from the soviet railways. It is dated 1955. It looks like it is about an exhibition about newest railway equipment (locomotives, rolling stock, track maintenance and so on). From about 11:40 to 13:00 there is a medium sized motor locomotive with a gas-generator. It can be clearly seen that it is an updraft coal-gasifier with added steam.
I can’t understand what they say, but maybe @KristijanL?
I have only seen pictures of small shunting engines during WWII with gasifiers, never this size.
Maybe you will find it interesting. 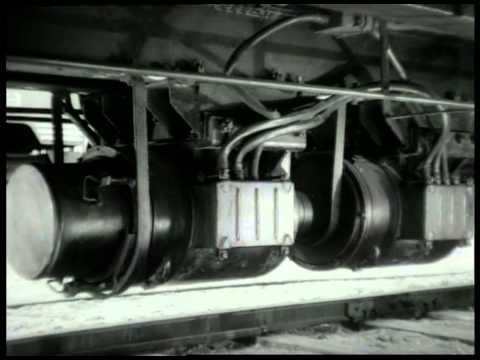 Hi…!!!
What I can see is that it´s a COAL gasifier with a continuos feeder of coal. I don´t speak russian, but you can see it in the film and in the animation.

Hi ALL, this is linked three posts up to a woodgas and a charcoal gas converted vehicle systems that member Tilman put up.
Russian languages both.

You can now view those close captioned translated into the language of your choice.

Once playing bottom sweep to visible open up the lower edge tool bar.
Click on the CC closed captions.
Then open up the Gear shaped settings tool icon.
Select Auto translate
Click open on the right hand side of the Subtitles/CC line just past the current setting word Russian.
May get an auto translate you have to click enabled again.
Then you will have a long languages selection scroll to choose from.
Select and read on in the language of your choice.

Ha! Ha! Works to put English language videos into read along Slovenian, French, Swedish, and others too.

Here is a nice woodgas video from earlier this year if you all haven’t seen it already. https://www.youtube.com/watch?v=5GeyFnEgeP0

Stainless steel must be free over there. Nice setups

They tend to do more upcycling of materials in europe in general. But the kicker is they pay like $5.50/ us gal for gasoline. They save a ton of money. If gas shot up to 5.50/gal in the US, electric cars would be sold out for the next decade and there would be 10000+ people on this site and the electronic version of WK’s book would be sold out.

Yes, and still dirt cheap that is. Electric cars In the Netherlands? Last year there were a few ships with Model3 coming over. Unbelievable how many cars that are. We bought one and it saves us 5000 euro/dollar a year because we have a surplus of solar. That means the electric car pays for itself. Next step is to generate electricity in the winter…on woodgas

Last year there were a few ships with Model3 coming over.

They are even more coming this year. I think the Netherlands is up to 80% of all new cars are electric now. (I think that includes hybrids and phevs, but still impressive).

The US will be further behind the financial incentive isn’t there. In fact, I would think all of europe will be mostly electric before the numbers in the US start to grow.

The US will be further behind the financial incentive isn’t there. In fact, I would think all of europe will be mostly electric before the numbers in the US start to grow.

Could be, things are going fast now. Since Tesla got his models up and running things are changing. And fast. Not 80% yet, maybe 20 if I make an estimation. And not as fast as last year, because tax rules changed. But still going strong. On fuel overhere, 50 % is tax. I wonder what government is going to do to compensate that income. Solarpanels are very cheap. We started in 2012 (or one year later, don’t know) with the first set. Prices kept dropping and still do. Started with 1.6 euro /Wp and the last set was 0,70 ct/Wp. And now we run out of roof…

Government is going to change the playing rules as said and in the future you don’t get paid to much for electricity you put on the net. Well, battery prices are dropping and it wont take long that it is financially atractive to go off grid (and we have one of the best grits, never ever we experience power down, except that one time that an Apache flew in some high voltage cables)

Future will tell what is going to happen. Exciting times.

Skimmed from the internet: “May you live in interesting times!”

A government meter to charge you for the power that you produce that you use to charge your car .
"Yes you can get a meter . Thank you for asking ".

water bill for your private well

CLEAR WATER METER
A clear water meter is for water that is only used for outside purposes. It can be used for a pool fill, washing vehicles, and watering the lawn and flowers.

Hose bibs can be separated from the dwelling water and sewer piping. A second “clear water” meter can be added, parallel to the first meter, to measure water flow to only outdoor, non-sewerage producing uses. This clear water meter would receive just the water consumption charge and a quarterly base charge. Base charges vary with the size of meter installed. Yard sprinkler systems may need a larger meter if the flow rate is greater than 10-12 gallons per minute. There is a $25 fee for the permit.

If you are interested, please stop into the Municipal Center or call the Kronenwetter Water Utility at 715-693-5732.

Mike, I hope history is not repeating. But the same history is telling a different story. The one less bad thing might be that there is not so much blood wasted as in WW1 or 2. If you can provide your own food, shelter and energy you make a chance. I try not to thing to much about it, what can you change?

And this my Friend partially explains the differences between U.S. attitudes and approaches.
WE did not horrendously suffer as a society/culture in WW1 and WWII.
So we do not have the sufferings restraining experiences as Western Europe. Eastern Europe including the Russians.

We do however have carry over cultural trauma that shapes us. Fear of the break in at night true dangers. Native attacks with torcher, dismemberment and enslavement. The same with wild animals. Wolf. Bear. Cougar/mountain lions. Your old (true) Wolf-as-the Devil fear stories.
The High Central Powers-That-Be coming into our individual lives and . . . dictating.
The British elites first. War. The Northern states against the Southern states. War.
Now the decades creeping Gov’mint encroaches into our individual lives. Most unlikely not war. Most certainly individual actions lashing out in frustrations.
I have forced us to drive away from businesse we previously used when they decided to offer FREE 2 hour electric car charging stations. They no longer need our business.
The business with credit card charging stations - fine. Pay for your own g.d. transportation energy Tesla-buy-ins. I do.

it is said that the common Russian and common Chinese will endure Too much central government rather than go back to anarchies and warlords days. Maybe true.
It seems true the modern Europeans will mostly endure a lot of top-down directed social engineering rather than go back to any possibility of WWI/WWII horror’s. For Netherlanders’. Starvation. Shipped off work enslavement. Shipped off Death camps.

Well sirs, you are seeing the wide spread U.S. responses to rapid forced “science and facts” social engineering changes on your T.V. screens.
Enjoy the show.
This will certainly not be as interesting and exciting uplifting as the Space Race was to watch from the outside looking in.
Ain’t much fun at all right now over here. Households are dividing. Families polarizing apart.
My wife and I voted at dramatically opposite ends of the spectrum.
We don’t talk to each other about this.
Steve unruh

This will certainly not be as interesting and exciting uplifting as the Space Race was to watch from the outside looking in.
Ain’t much fun at all right now over here. Households are dividing. Families polarizing apart.
My wife and I voted at dramatically opposite ends of the spectrum.
We don’t talk to each other about this.
Steve unruh

I believe we are very likely more divided as a nation than we were while literally killing each other on the battle field in 1862. The different parts of our society today have less in common than those cousins who were firing rifled muskets at each other back then. Cultural, religious, economic, world view differences are far grater today. And the split over what “America” should be has never been broader, thicker, or deeper. I hate to be a doom-sayer, but I don’t see a way for this to self correct long term. Hopefully, my being able to see it won’t be a deciding factor in the outcome. My advice to all is to prepare for all possible eventualities for family and friends. But this has nothing to do with woodgas videos…