I will be doing a one hour workshop at the Midwest Renewable Energy Fair on one of days of the fair, June 20, 21 or 22. It is outside of Custer, Wisconsin.This is the largest fair of its type in the nation with over 200 workshops and tens of thousands of visitors. I will be bringing my woodgas and charcoal gasifiers. My gasifiers only run small generators. Demonstrations will be limited to show and tell as the Fair has a policy of no fire on the grounds. The workshops are only 50 minutes long so it will need to be short on details. My presentation already has a link to the Drive On Wood web site. 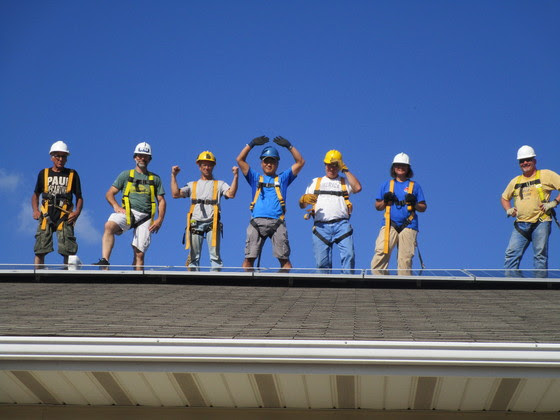 Our mission is to promote renewable energy, energy efficiency, and sustainable living through education and demonstration.

I have two requests.

George, I attended one fair there several years ago. It is around 2 or 3 hours north of me. I found it a bit lacking, especially when I realized I had more panels and wind than what they had there at the time. Their electric cars had frozen / dead batteries and rusty motors. I was tempted to drive there on wood one time but … There are a lot of wannabes.
On the other hand the first woodgas vehicle I ever saw was a station wagon at the energy fair in Amherst Mass in 1976. It did plant a seed in my brain. I studied the heck out of it. Feel free to use any pictures from my site. That’s why I put them there
http://www.intergate.com/~mlarosa/images/woodgas/?M=D
Mike LaRosa

Thanks Mike. I’ll look through your photos.
I end up going to the fair every other year or so. Last year they had a number of the new commercial electric cars and a couple working conversions. There was an electric motorcycle conversion and a vegie powered conversion. There is one heck of a lot of gasoline burned getting people to the fair but hopefully it is getting some people moving in the right direction. I also have a good collection of solar stuff, PV panels (3.4 kW), solar hot water ( 5 panels 4’ by 10’), hot air panel, two solar ovens, two solar dehydrators, solar beeswax melter, solar stock tank heater and an assortment of small PV stuff. Woodgas is a fairly new project for me.

George, Where is Ridgeland in the state ? It is not listed in the index in my atlas nor is Ridgeway which is a fairly large town. I am in Linden (about 10 miles west of Dodgeville) … I had to hike up to my panels on snow shoes after the last snow to clean them off. Mike

George, any photos or videos of Wayne’s (or my) trucks are OK to use. There are hundreds of photos scattered on this site, a bunch of them are here:

Mike,
Ridgeland WI is in NW Wisconsin roughly half way between Menomonie and Rice Lake. It is about 75 mile East and a bit north of St. Paul MN. My panels are fairly high being on a dual axis tracker. The tracker isn’t working right now. The last big snow/ice storm required a trip to the panels to clean them off.

Chris,
Thanks. I found some good photos.

George, The thing I was most impressed by at the fair was some guy from some red place ?? red wing, red rock ??? that was selling optical controllers for $25 to use the old large satellite positioners to track the sun. It would be perfect for 2 or 3 panels. That’s the kind of stuff I appreciate. I couldn’t see how he could really make any money on them but he seemed a happy camper. He may have been in a wheel chair but I don’t remember ??? … Bear in mind that there are many ways to skin the woodgas cat. It depends on what you are after and what you need and how much welding you can do. I have run my current trailer on 3 different vehicles. I plan to put my new gasifier on my old, smaller trailer and make some mods on that. That trailer has been behind 5 or 6 vehicles. I just wish it would go to spring already so I can really get back to work outside before I have to get back at hustling the buck … I’m sure you feel the same your way … Mike

George, Wes K is fairly close to you and has quite a bit built. He is about half or 2/3 the way to Custer from your place … Mike

George,
It sounds interesting. I live about 35 mi NW of Marshfield. Prob about an 1-1/2 hrs from Custer. I’m still working on my gasifier truck and hope to have it done b4 the end of April. At this time I dont have anything planned for that weekend, however I have normally vacationed with my wife on her birthday that weekend. That could change this year so I cant commit yet. Do you have any other details? Are you going as an exhibitor? Have you done this b4?

I am not going to be an exhibitor and I haven’t been a presenter before. I am just doing the 50 minute workshop. I haven’t been told yet which day my presentation will be on. There is a space provided for alternative vehicles. I don’t believe there is any cost if you want to display your vehicle there. Last year there were a dozen or so vehicles. Several production electric vehicles, a few hybrids, a pickup and car that were converted to electric. Two electric motorcycle conversions, a vegie oil conversion. There was a vehicle with a hydrogen generator used to supplement the gas engine.There were no wood gas vehicles. It looks like David Siedschlag will be at the fair for one day with his woodgas pickup. Hopefully it can be arranged to be the same day as my presentation.
I think the fair started out as a showcase for solar, wind and hydropower. They have added green building workshops, a variety of workshops on gardening, seed saving and food storage. They haven’t promoted biomass as far as I can tell. I did attend a wood gasifier boiler workshop last year. I also think there was a presentation a couple of years ago by Sustain Jefferson County about a FEMA style gasifier they had built.

Ridgland is 73 miles south for me. Nothing running on wood yet but would hope to have by then. Time will tell, I might still be snowed in ,who knows

Jim,
Where in the state are you at?

Hey David, I’m in Minong, That’s 20 miles north of Spooner and 50 miles south of Superior and twenty miles west of Hayward at the intersection of hw 53 and 77.

How many other “Wisconsinites” are working with woodgas?
We almost have enough for our own “local” get-together.

Pete,
Don’t forget those Minnesota wood gassers near the Twin Cities. They are closer to us than the guys near Madison WI.

Hello; Thought I jump in here. It has been a worthless winter for me as far a woodgasing is concerned. So cold I didn’t even want to walk out to the shop let lone sit and wait for the shop to get above zero.
Anyway I’m in Crivitz, Wi.; 50 miles north of Green Bay on 141
TomC

Tom C,
Good to know about another Wisconsin Woodgasser.
The last couple of days have been nice. I got quite a few things fixed up on my gasifier and had a chance to try the gasifier and charcoal gasifier before a class I’m giving tomorrow. I had a small burp because of an air leak and blow up the fan on the old vacuum I had been using. The replacement I picked up from an auction on Tuesday work great. Well it works too well. I over heated both gasifiers before I dared plug it into the dimmer switch which is only rated for 400 watts. The switch held up and I hope it work tomorrow too.
I was able to get some done over the winter. I put 1/2 a green house on the south side of my equipment shed. At zero outside it might get to 60 or 70 inside on a sunny day.