XO RUST paint is really crap paint with a big true value lable, i mixed in just a smal emount of mineral spirits too spray, the paint drys like easy scratch paint,if looking for cheap paint, at the hardware,buy the rustoium profechenal,it seems too dry much harder and is scatch proof in a week or two.although not gasoline spill proof as most of the car paints. Any other ideas for cheap paint im interested, LATER,

I have had good luck with the 8 dollar or so pints of rustoleum. That is what I used on my gasser. Gotta use a lot of thinner tho if you are going to use it in a HVLP gun.

Cant say its cheap but we use the rustoleum 2000* header paint and the primer that goes with it. I found this long before building gasifiers, I had ran out the VHT on an engine rebuild. I did one manifold in the VHT and the other in the rustoleum. Two years later the rustoleum side still had its paint the other side completely gone. The rustolium is the only thing we have ever used. However, we going to a power coat soon, there is a chrome coating that will resist chemicals and can withstand upto 1200*. We are going to look into this and may try on most components except for the hearth.

This is what I used on my chunker, my gasifier refresh, and plan to use going forwards. Gloss Black Rustoleum, and their Clean Metal primer. Pretty sure it’s what Wayne uses as well. You get a whole quart for a tad more than the 10 oz spray cans, $7-8 here. It’s not a high heat paint, and I watch for paint burn-off to indicate problems. With an insulated WK unit you shouldn’t burn normal paint.

I knew i should have bought the rustolium,instead of the XO RUST,when i painted my s10 i used tractor supply paint with hardener, that paint wasent all that great, hard too keep from running if not extra hot in shop, I may try rustolium on my old 2500 truck,if it gets dented later i can repaint in few years.

Thanks for responces Chris ,matt, and joseth, I had not known about rustoleum 2000, i am looking on ebay after this ,Thanks PS i am hopeing too get it smokeing before summer ends,my layers next too the burn tube seeve are aranged a little differnt due too undersized houseing,if it stays cool too the touch and my cooling rail temps dont begin too rise from the norm,then we know what happen,and the other variables in range, I will have barely two layers sheet metal inside the lower drumb, and then three layer out side the lower drumb houseing. I may have to go back with the high temp insulate between outer housing later.Unless i remake the lower houseing.I think if the outer burn tube sleeve holds up the outer burn tube houseing should hold up, My next burn tube houseing will be streched water heater metal, or barrow, square aint as easy as it seem’ed at first glance. THANKS

Does the rustoleum need to be cured like VHT does?

The spray on rustoleum is usually dry in about 15 min .

The only place I have found the paint will burn off in the gasifier system is parts of the motor exhaust heat exchager .

I may order a can of the VHT you mention to paint my exhaust heat X.

Matt said that the VHT didn’t last for him. I don’t know if he cured it or not. I was wondering if the rustoleum needed curing as that would be another plus for rustoleum.

Here’s my unit in the spring of 2014. I sanded everything I could reach and sprayed on 2 coats of Rustoleum Low sheen. The middle pic is current condition and the last pic shows the hearth area under the aluminum heat retaining shroud. I couldn’t ask for better performance. No primer was used! It wasn’t that expensive, but we’re not talking price are we.
Pepe 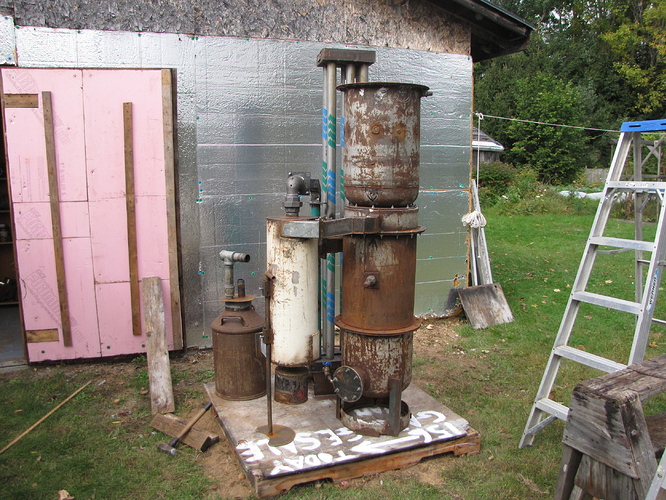 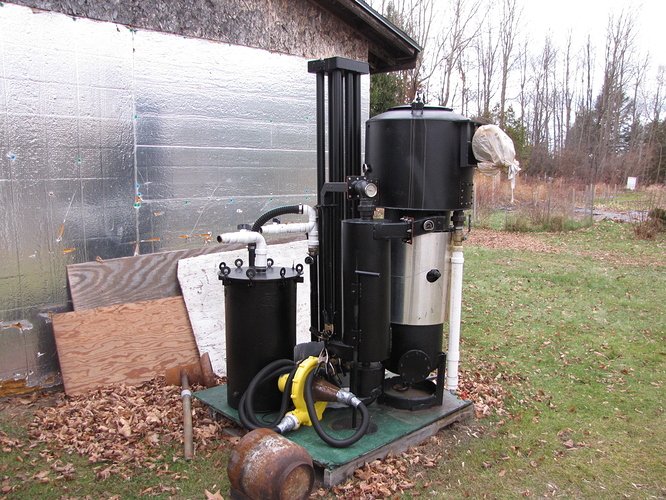 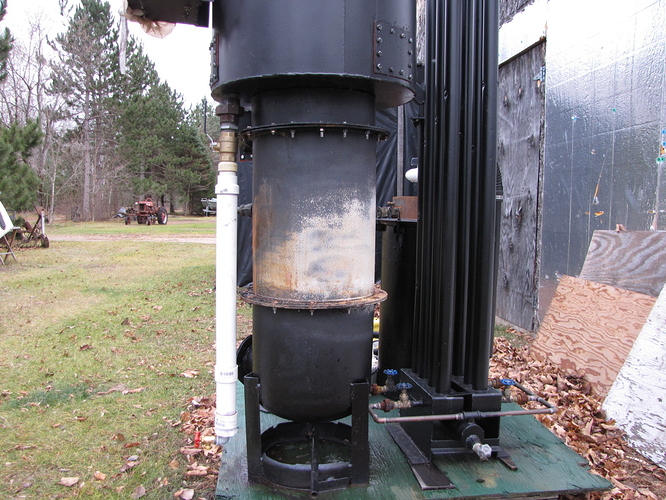