What do you guys think this engine?

pretty neat. Fairbanks-Morse made a lot of large engines for pumps, saws ect back when steam started phasing out.

It’s only 15 miles from me. Not too sure if I should make an offer. Can buy a lot of clones for that money. Must take 5 gallons of motor oil, och… On the other hand it’s all engine and close by.

I’m a great fan of taking one risk at a time. Would it be for matching to the super cap? Would spend 1/3rd the money on a Honda…

The super cap might match up better with a Honda clone but I guess just up the gearing/belting to match the alternator rpm. I’m sure a stationary chore could be found for it.

This would run for a long time but might be a waste of my resources.

If I had unlimited time and money I would be looking for a F&M or like retired Oil field engine.

Most people do not get it, as good as a Honda is its not designed to run a long time.
Its designed to be light and portable and work as well as possible.

But these engines are designed to run day after day year after year…
They are forever machines, they will outlast you. 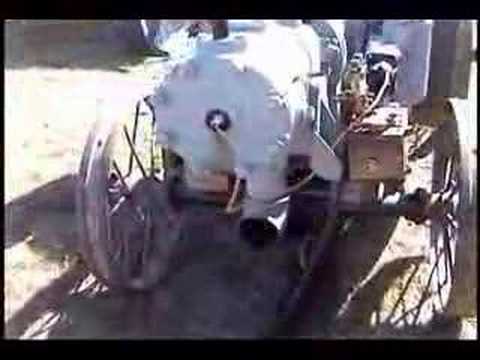 But these engines are designed to run day after day year after year…They are forever machines, they will outlast you.

Yes, and that’s why we love them. That, and the fact they look and sound mean and powerful.
The downside is, they were not especially economical on fuel. That is a consideration when gathering, preparing and storing the fuel yourself.

Most people do not get it, as good as a Honda is its not designed to run a long time.

I agree 100%. That’s why I lust for those heavy iron engines. But hit my self with some cold water to wake up. There is an advantage too staying focused. The time, money and space (resources) could do a lot of damage in the end and running 24/7 may not be my best choice. It really hurts to back away from a slab of iron like this…

With the low rpms and the big flywheels, it might make a good chunker engine. You might be able to skip the gearbox.

You need to pick the right engine for the job.

That’s all I really gots to say bout that…