Thank you Chris, you and your Dad have done a wonderful job on the new Premium Members Library. This is a great tool for building with all the videos and instructions to build the Keith Gasifer or the WK Gasifier.
Just in time for all the new influx of people wanting to build gasifers.
Bob

Working great for me @Chris on both mobile and pc

If I were to use some sort of Lovejoy adapter from a 196cc Honda clone to drive a 5/8" shaft to the generator head that should work in theory right? Or would it overpower the system and mess something up?

You will have to dig for the information and links but the company in China that I bought the Crank for my GX240 rebuild when I re-powered the Kohler electric plant. That company began to sell parts to repair electric vehicle range extenders…

So to keep it simple the the V type crank used on standard Chinese generators was chosen for the electric vehic range extenders and you can order just the alternator end and reused a 196cc generator engine to power it.
Then you will need to use something like an Arduino to match the engine speed to load and feed this power into the DC link on the suitcase generator.

You might be able to use the 79cc engine’s existing carb servo to run the carb on the big engine directly.
Its a crap shoot but the proper selection of parts to do this is probably sitting on a shelf in China already.

The Lovejoy coupling might work.
It might be easier to strip the entire alternator and try and build some sort of mount to direct mount it to the bigger clone.
I see a lot of machine work going that route.

The alternator does not care about the size of the prime mover all it wants is a steady state voltage from it to power the inverter.
This in a PM type generator is done by increasing and decreasing both speed and torque.
A normal alternator requires field control…

The electronics don’t care about frequency because they are making DC from the alternator output on the inverter generators.
This simplifies thing for the controller since it only needs to worry about speed to match load with a PM alternator head

You could use any alternator motor and inverter combination as long as the voltage out from the PM head matches the desired input voltage of the inverter.
That might make it easier to understand…

You might try to put a battery between the alternator’s rectified DC output the the inverters DC input.
This would act as a buffer to absorb voltage over shoots from the Alternator and to provide fast response to load increases from the inverter.
Thats probably the smart way to go about it if using a self made speed controller and carb servo because your controller might over shoot and undershoot.

for anyone that hasn’t got into the google photos file called wood fever, it is worth the trip! To see how far Wayne’s design has come and his beginnings into wood gas is pretty awesome! You might even see him in a shirt and tie

That is a great place to start. Yes Wayne in his younger years building gasifers he has gotten better with age. Oh yes and his Gasifiers builds too. His last one the Wilbur/Smith build, he would like to probably buy it back some day at a much lower price. It is a Beautiful V-10 truck and a WK Gasifer build.
Bob

Great advice Wallace.
Learned from doing.
I too share your skepticism of pure Chinese engineering and quality control on inverter-generators then many Brand-Named sold. Can’t get service info. Can’t get parts. They can only, bought new, exchange whole units. . . m-a-y-b-e.
Why I went with only Honda and Yamaha engineered and controlled manufactured.
The Wife’s Honda 2000 I gifted her was manufacture in a Honda plant in Thailand. Still a Honda. My open framed E(something) 2800 Yamaha was made in Japan. My b-i-l’s Yamaha suitcase 2000 was made in Tiawan.
I did special ordered in, and got factory service manuals for both of mine bought new. Can even special order in parts thru Honda and Yamaha dealers.

Cody be very careful on the three-phase alternator, transformers and big capacitors side of these. 100 to 300 volts there man. Those capacitors can residual charge hold and can bite you hard later. And wild frequencies up into the multiple thousands on that side of it.
Regards
Steve Unruh

Yes. Plastic handle skinny flat-blade (not your favorite) screwdriver. Decent sized clip lead from screwdriver blade to chassis ground before you poke the beast. When you hear the “Snap”, you know you saved yourself some pain.

Edit: Just in case the circuit is “floating”, go across both terminals of capacitors at the same time. Doesn’t hurt to wear some dry gloves as well. Don’t forget to unplug, power down, etc!!

OH Oh. Might be going to get a little iffy charging that Tesla

This will make smoke come out of your ears young fellow!
Like the guy down the road that put new plates in your battery there was a guy that replaced the gun in your TV tube when it wore out.
Its almost inconceivable in 2022 that a TV needed to be tuned up.
It required service sometimes are much as once a year to ensure good quality viewing.

Too that end This is how a tube was refurbished at the last shop in the USA about 10 years ago.

And I would like to add with less than about 28 tubes you could build a set that was colour with a not unreasonable picture ( quality parts of course ).
But these required set up in the home after sale and the care and attention of the TV repair man.

Thats why you were getting that free copper chum.
The TV man never came by anymore and the sets went out of tune and quietly faded to black…
I never fixed a tube I am just pulling your leg.
But it was a thing. ( untill the SONY Trinitron )

I remember in the nineteen fifties going to the hardware store with my father who had tubes he pulled from our TV. They had a stand that you plugged the tube into to see if it was bad and if so they had replacement tubes under the test part of the stand. I thought he must be a genius to know how to fix a TV. I always liked looking at those tube glowing in the back of the set. The way things are headed there will be no sets. They will just plug some kind of metered RF plug into the side of your head that will provide shows and charge you for the time you use it.

Ha, ha I had one of those tube testing machines back in the late 80’s.
Bob

Bought a 256gb SD card for my phone. It has decent camera lenses so I think it’ll be great for filming. Here’s hoping going back and forth from my phone to my PC won’t corrupt it.

Wow, wow this is refreshing, not since I have joined has there been so much DOW action. Lots of new members and I am sure there are some like me when I first joined as a free member I was so shy I could not even make a comment. I just read and was silent. Can you believe that, wow have I changed. I have learned that on this DOW site we do not consider anyone asking a question because they just do not know as being a dumb question. I have proven that over and over again. Lol Right.
Yes we are a special breed alright here on DOW.
So if you are out there like I was, just say Hi. If you have a question ask it.
Well this use to be shy Bob just want to say hi to you all that are out there reading and checking the DOW site out. Hope to meet you soon.
Bob

Thats why you were getting that free copper chum.
The TV man never came by anymore and the sets went out of tune and quietly faded to black…
I never fixed a tube I am just pulling your leg.
But it was a thing. ( untill the SONY Trinitron )

Some of them don’t even use copper, they use aluminum coils. I just pulled apart a monitor to avoid the 60 dollar disposal fee. I think the coil itself might be aluminum colored to a nice bright copper color.

The tv tube itself is sealed but the old pre solid state Tube tvs, actually had a mess of smaller tubes that were user serviceable, if you were careful since it is a high voltage circuit. I don’t think you could ever repair the main tube, just replace it. People play with the flyback converters since they are a high voltage spark.

The funnel glass, is welded to the front panel. The front panel glass is lead-free, You can separate the front glass by essentially wrapping a steel wire around it, and heated via electric. The rest of the glass called the funnel glass and that has like 28% lead… You can recover it with a few processes. Here is one:

The disposal of CRT monitors increases each year, generating millions of tons of waste...

Yeah I read way too much about recycling crt’s.

The one I took apart the case was mostly abs plastic which can be melted and shaped. You heat it to I think 220C and it becomes a goo that you can mold.

not since I have joined has there been so much DOW action.

I was so shy I could not even make a comment.

I have a hard time believing that

We are having flooding in my area for a couple days and made me think of this video of my old ford DOW . It is 11 years old . 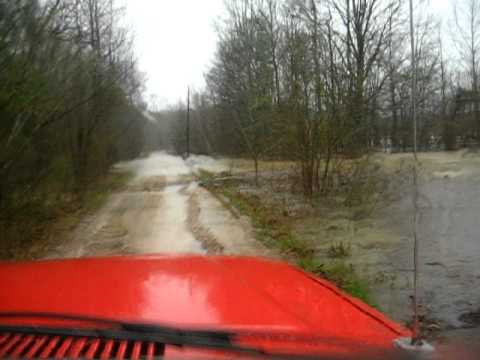 Wow that is DOW in the flooding rain on the land at your place. It is no wonder why you all do not need to irrigate the land. It is more like the West side of Washington State.
Was the red truck carburetor or throttle body fuel injected?
Bob