You are right about that statement! It is a general rule (that l found only recently to be true) that its better to be undersized thain too big.
The main question still remains. What is your fuel size?

Wow, hey Wayne! I’m in Indiana, is there a place I can view the upcoming events on DOW? Maybe I can ride the bike down to AL when I get it done, haha.

As far as fuel size goes, I would like to run it on chipped up small sticks, that is what I have availible to me. I know it is very poor quality with low btu/ Lb but anything other than that is going to almost be a waste of energy to acquire. The fuel I am envisioning is about 1-2" in length and twig to 1/2" in diameter, and all mixed hardwoods with bark still on the ~10% water, dry sticks.

This looks like good fuel. Just be sure there isnt much small long twigs in there to give you bridgeing problems. I dont have much experiances with such small wood (exept pellets-terrible) perhaps others culd help you.
So lets say you have a 800ccm engine driven at 3000 rpm. On Maxs formula this gives you 0,8l x 3/1000rpm x 3 = 7,2l/s of max gasflow. Based on the fact you will use small fuel, the hearth will be wery small. For other info you have to wait for the chip kings to wake up

The min cooling surface on a nother Maxs formula is 1,7m2.

Hmmm, 7.2 L/s means very little to me, I think I might just be overthinking this. For a 750cc engine that runs 7500 max rpm, would having say… a hearth zone of 6" diameter x 5" height with 5 tuyers each .3" diameter at the top of the hearth zone, with a reduction zone 3.5" across, and a cylindrical biochar zone approx 4"-5" deep and 4" wide with the ash grate below, be working dimensions for this hypothetical engine?? I get lost in the equations. Also this may all be in vain because I am yet to even OWN a motorcycle. The purpose of this forum is to first figure out what qualities I am looking for in a bike, buy that bike, THEN critical dimensions of the reactor that correspond to that bike. Thanks for all the info

There will be an event next weekend in MO Link below

For the last 5-6 years we have been having an event in Indiana . Pictures and video below .

Maybe I can ride the bike down to AL when I get it done, haha.

Sure wish you could ride in a well tuned gasified vehicle before the motor cycle build .

Your dimensions are WAY to big. I have smaller dimensions on my car and l use big 2" chunks of wood and its still on the big side! You are looking more in the neighberhood of a 4" nozzle cyrcle, 4" to the restriction, 2" reduction hight and 2" restriction. You did say you are makeing a Imbert right?

I am not s fan of numbers either, always did anithing by the guts, but l have learned from some great guys here that if you want to make it right, you have to be guided by some important numbers. Its not so hard once you get the hang of it.

I agree, would really like to talk to people who know what they’re doing in person before I invest my time and money in this project. Never even seen a gasifier in real life other than the one I built. Hmm, I’ll keep watching DOW forum to see when the next event I can come to is. Don’t think I can make it to Missouri sadly. I feel like if I came and talked to the community in person I could leave 100% confident in my plans and probably have completely different plans coming out than going in.

Welcome BrentonB
Do a net search for video’s of woodgased motorcycles.
You will find recent woodgas fueled conversions of the Russian two cylinder opposed motorcycles. HAS been done. Can be done.

You sound American or Canadian. So look seriously at the older inline four cylinder Honda’a too.
These can be geared down to be 4000 RPM runners.

Look in the library section here on the DOW and read up on the NOT-FEMA gasifier systems for systems dimensioning and components layouts variations. Example: you HOT cyclone separate directly out of the gasifier hearth BEFORE filtering. And Why.
Wash FEMA advices out of your mind. It was a shit’s-hit-the-fan minimalist system for one seasons use only. It’s in the name, eh. 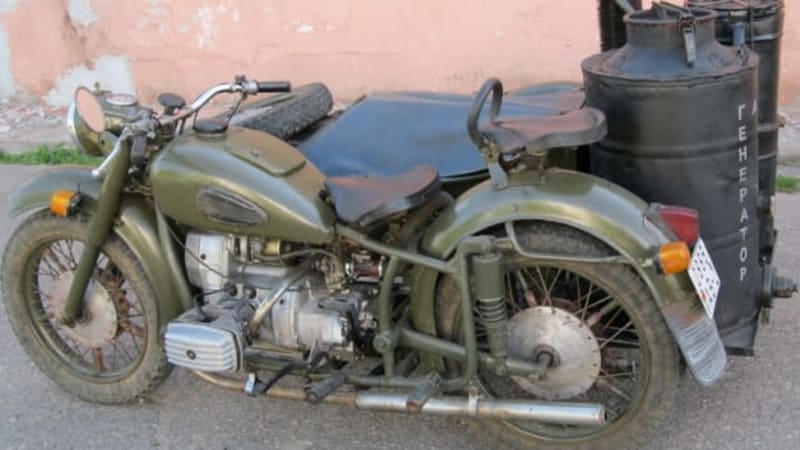 Occasionally, we come across a technology that has just kind of been forgotten about. Take this Ural motorcycle. It runs on a substance called wood gas, which is the byproduct of incomplete combustion of carbon products like wood, hence it's name....

Think seriously about a motorcycle trailer system be be able to have a large enough hopper/stored fuel range capability.
You’d want at least a 200 mile range possible with-on board woodfuel from friendly source to friendly source.
Ha! Folks showing up road-side along any of my wooded properties thinking all downed wood is “free”, get 20ga double informed that I PAY THE PROPERTY TAXES on it. Not them.
County roads, State and Federal forest/roads departments just as cranky around here. Lake/ocean side wood taking is an even a more serious matter.

Personally I’d go side car… that’s just me. I’d also look at over square engine with as high of a compression ratio as I could find. I will build one some day… it’s in the works… gotta build a small shop first though… working on it

I looked at all of the pics in the article, seems very close to what I was planning except it is in a sidecar. IMHO I think I could do better if I get the right motorcycle. I will keep searching specs on motorcycles until I find the right one, hopefully I can find one with lower RPM and more cylinders like you recommend. Thanks for the interest and help, the more information that passes in front of my eyes the better! Thanks

What is the point of the long compression ratio? To make sure all of the gas gets combusted in time? Does syngas burn slower than gasoline?

Higher compression ratio… the yamaha I’ll probably convert is around 9.7 to 1, and is over square… bigger bore than length of stroke.

All of my motorcycles are the high revving honda 350, 750, or Suszuke 1000. But I do remember there are some bikes out there that they call “big thumpers”. I think they are low rpm big displacement two cylinder dirt bikes. That might make you a better gasifier project.

Your conclusion on under building and over pulling a gasifier is valid to a point.

The design I have posted is simple to build. Build it and try that single cylinder engine that you ran off from you big gassier. Just to see if it will work and then decide what bike you could get to fit it onto. TomC

To make sure all of the gas gets combusted in time? Does syngas burn slower than gasoline?

Just because an engine can Rev to 9000 rpm doesn’t mean it has to.

Arvid is of course right about this, but…

My little Rabbit pickup has 95 hp on gasoline but to get to them I have to rev 5500 rpm. I try to stay below 3000 wich probably leaves me with about 50 hp avaliable (on gasoline).
On woodgas I’m probably left with only about 25-30 hp. Still enough to push me down the road at 50-60 mph speeds but slightest up hill slows me down.

The more HH in your gas the less you need to worry about flame speed… or atleast that’s my opinion.

And a very large cooler to run an engine at that speed.

Reading your desire to build a woodgasifier on a motorbike, giving you my 2 cents;

1: You won’t be able to run above 4000 RPM, under load conditions, not even with a simple charcoal gasifier period.
2: calculate a derating from minimum 30% at 4000 RPM
Typical gasmixture from woodgas has an actual power/burning rating of 2,4 MJ/Cbm
From Biogas 3,3 and for gasoline 3,5 ( calculated on stoichiometric mixture)
3: Look for a bike with or minimum 750 cc, four stroke, 4 cylinders
4: Learn why woodgas can not achieve more then 4000 RPM ( under load )
5: Having an engine reved up to 9000 rpm on woodgas, does not mean it can deliver some power, nor that the engine is ok, its the real life power on the wheels to the road, under real load, what counts.
6: Follow the advice of Steve Unruh, regarding books to read/understand.
7: Take your time to study before building.