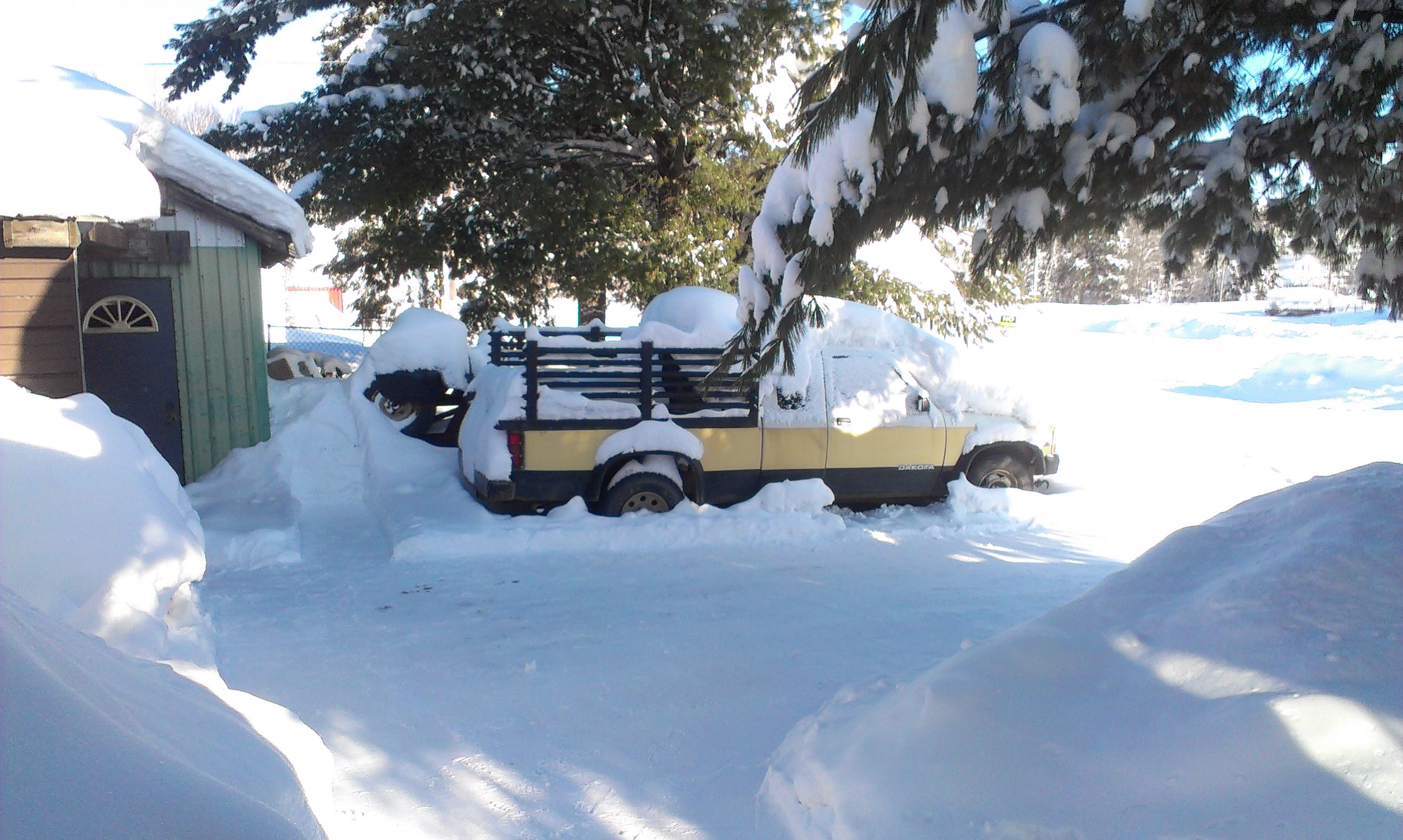 Wait… There is more to come!

Apparently we’re going to get 6" tomorrow… temps should be below 20 for the next week. Winter wonderland indeed!

Sigh.
For us out here PNW, Cascades wet-side this winter has been too much, rain, mud and streams/rivers flooding.
Too warm of temperatures to rebuild much will be needed May through July mountain snow packs.
No good pictures of this to put up. Barren ski-slopes, muds and brown floodings.
And now too much sun (yes this is possible) with tree saps rising, grasses srouting and wild flowers blooming 6 weeks too early.
We would gladly trade some cold and snow NOW for some if this too good of out-of-season weather.
Regards
Steve Unruh

We have been cut short with the snow this year and the cold is showing up late. I finally have a wood stove in the garage and have been able to get it up to 60 degrees. Now I am experiencing problems with my welder.
So far I like this site but like Wayne said, I too need to learn how to navigate it.

Winter has hit Dixie and it is too cold to get any work done outside. Just hard for us old folks to funtion in this weather . Keeping cattle fed is just about all that is getting done .

Fourth day in the teens here. Getting down to -7 or so at night.

Most of Monday’s snow is still here… Although this is normal for us up here in the north, I can’t imagine how difficult it may be for some of you to adjust. It must take a while for the plows to get through the towns and get all the roads cleared? When you stated that there was a driving ban, what does that mean? Can one get a ticket for driving on the road? Some businesses can’t just shut down.

There are 13 plow trucks for the whole city, also covering two major highways through town and a freeway. They were putting snow into garbage trucks to haul it away, and the governor called out the National Guard to help. Frankfort is about 15 square miles, not a metropolis by any means. Louisville has 10x the snow equipment but 30x the city area.

Driving ban, I dunno how serious they were about enforcing it, but they definitely didn’t need any extra vehicles to go rescue. People around here don’t know how to drive in more than 2-3" of snow. They also don’t know how to stay home… I saw several neighbors get out regardless.

I hope everyone is staying warm today. Had the stove in the garage running for two hours and it’s only 39 degrees. As bad as it’s here in the States I’m sure it’s a lot worse where Terry L. is. Spring is right around the corner, hang in there all.

An inch or two of snow predicted for us on Mon-Tues. They miss it 75% of the time, but the other 25% is hard on everyone. What’s a plow truck??? Ha! We use road graders. Carl I know you know what they are but this is the kind we are seeing lately. They have side wings that can retract when needed and some even have green laser beams to shine on the road edge so they wont take mailboxes down.

As a kid, they always looked like fun to drive. Yesterdays snow was light, but 1-4" predicted for tonight.

Snow is forecast here tomorrow and school has already been canceled .

The kids have only had one full day of school in the last seven school days .

We didn’t use a single snow day till Feb 16 now we’ve used 3, and fixing to use a couple more, they’ll be going extra days in the summer if it don’t stop.

A somewhat rare occurrence here. They are predicting a whopping 1" accumulation today. Temps hovering in the low to mid 30’s so it is functionally no different than rain. The ground here never freezes, so it won’t last long. You are right on Carl.

It hit us just a little while ago .