chimney effects works to draw air through though, the barrel collects heats,

I’ve thought about using solar chimney effect. the driest chunks would be at the bottom. I guess it would work really well here in Colarado, where the air is so dry and we get more than 300 days of sun per year. Not that I’d dare have something like this here at my suburban house, LOL, but it might fit right in on a farm.
Rindert 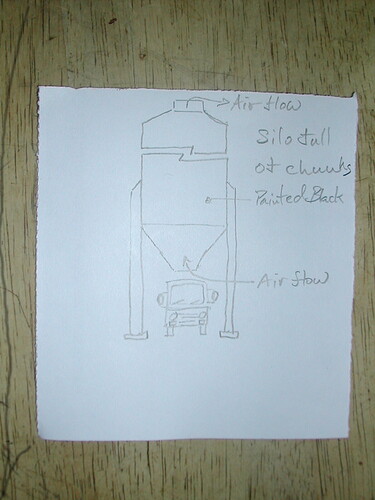 Here is an existing oldie but goodie topic link on this:

So because I will be chunking wet wood, I need to thinking about drying some wood. I recall Steve U. handing out great advice about air flow and insulating but I can’t seem to be able to find it. So maybe this will trigger a response from Steve. My first wood chunk dryer won’t be very big because it will be located here in the cities. I also want to put it on wheels so I can move it around as needed. The picture provided is similar to the shape I need. The flat side will be where the windows w…

I never did respond to BillS’s request back then because I could not come up with a useable link to a New Zealand fellows work. He was making a solely passive solar lumber dryer from old black painted aluminum metal roofing sheeting.
No glass.
The shape of BillS’s but much higher slopes to create an upward air chimney effect.
The opposite of sun side slope; being a tall flat side with barn doorlike hinging opening out to forklift in/out his lumber stacks after drying.
Same could be done with barrels opened topped, expanded metaled bottomed barrels of wood chunks/chips placed inside. Or; ChrisS’s proposed pallet bagged wood placed inside.
I do not think you need the glass. Just an uninsulated black metal exposure side. Tall. Sloped, warming and chimney up flowing.

Also follow StephenA’s angled bucket drying works link on this topic. Do that with your barrels.
S.U.

Not that I’d dare have something like this here at my suburban house, LOL, but it might fit right in on a farm.

The fancy grain bins have circulating fans on them.You can add a solar hot air collector system to the outside and run that hot air through it.

Honestly, if you use mesh bags like WK does, then you could take a black plastic garbage bag and put over the top so the open end is at the bottom, and you could poke a couple holes in the top, and have it set on like a pallet.
It would work, but you have to be a little bit careful about starting a fire. One guy around here had his solar kiln go up in flames because it got too hot.

I don’t think the garbage bag idea could start a fire, or garbage all over the continent would be lighting regularly. But for heating, I like the idea. Incidentally, I did something along those lines for heating water. On a good day it could make it almost too hot for bath use. 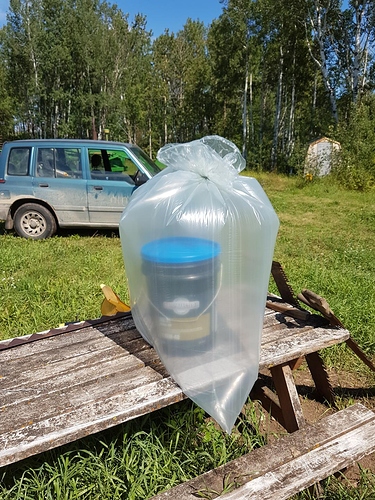 had his solar kiln go up in flames because it got too hot.

That’s the part I don’t like. I can easily see how a silo like the one I imagined could go up in flames, here n Colorado. And I don’t think it work at all in a very damp place like Okinawa, where I was stationed. The chunks would probably get moldy and rot in there. My chicken wire crib works real well here in Colorado though.
Sean, I was a little interested in what you said about water running out of the bottom. Do you think, at the end of the day, when the outside air temp started to drop moisture condensed on the inside of the barrel and ran down the inside?
Rindert

You just stated a basic condition as where you are trying to actually do this wood drying Rindert.
Most of Colorado is low pressure land. Halfway up to no-grow tree line.
Look on the Net and some wood drying is done in rail-in; rail-out pressure lowered dryers.

Open air and I will still say it is mostly about air flow past. Up the humidity of the contact air. Remove it. Replace it with any temperature lower humidity air.
Temp boosting just helps the air hold more moisture and boost the inner cellular moisture drawn out.

Then GaryT’s; much of the year really dry, dry air. He can dry in the winter in deep freezing.

Relative humidity. And vapor pressures should become your driving factors.

I can easily see how a silo like the one I imagined could go up in flames, here n Colorado. And I don’t think it work at all in a very damp place like Okinawa, where I was stationed. The chunks would probably get moldy and rot in there.

As far as it working in a high humidity, it should work there as well. The trick is just above any body of water, like a water droplet, the relative humidity is 100%. The outside humidity might be like 80% but there is still a differential and a place for the water to go. For sure it can’t disperse as quickly.

Do you think, at the end of the day, when the outside air temp started to drop moisture condensed on the inside of the barrel and ran down the inside?

If that happened it did it overnight, but it also happened when I put the wet brush in, in the morning, and mid afternoon, water was leaking out. It was either condensing on the brush that hadn’t warmed up, or on the backside where the sun wasn’t directly hitting it and warming up. That isn’t an ideal situation and thus opened up the bung hole on top.

Yesterday at 8 AM, OAT of 29 deg but sun up and shining on the black painted wood hopper. Temp probe read 95 degrees.

I used to inspect 60 mil HDPE lining for landfills and often read 150 degrees on that black liner.

I’m thinking of making a small solar wood kiln. I have a fan that runs with a cooling fan but I want the fan to turn on and off at certain temperatures.
I would make the garden box deeper than this. I found this picture on the web. 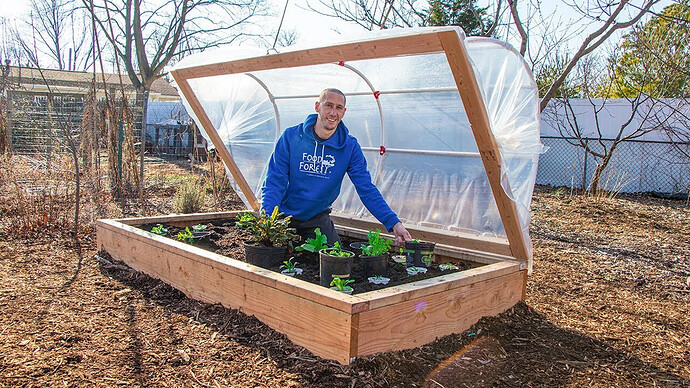 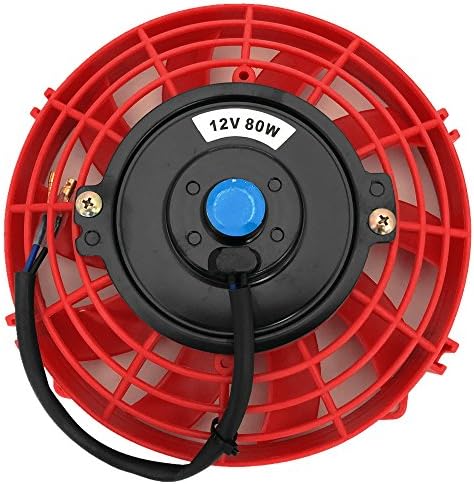 Hi Bill, it should work fan draws 6.6 amps controller output is 10 amp. It will depend on how many cubic feet you make the dryer, if that fan will move enough air.

I take you are running this off your batteries? If you go too small the fan may not cycle enough, and draw a lot on your batteries. I guess it depends on what time of the year you use it, and where it is oriented to the sun.

Actually that fan will be ran by it’s own solar panel. I actually fear this fan will be too big.

I actually fear this fan will be too big.

Too big for what ? i don’t understand i would have thought the more air flow the better

Bill i am not sure about temps to be honest i have only ever worried about getting as much air flow as possible through the stack , i guess heat helps a lot too .

Ha, there was some maintenance yesterday, my post didn’t show up. My idea, I had heatpipes with a waterpump like that. Functions great.
For the fan it will be try and error. The good thing is , as long there is sun and heat it will refresh, if not then not. Good idea! And no extra work/thinking involved, just change wood if it is dry.

I live off grid up here and am wanting a way to dry wood without plugging in an extension cord. My reasoning with my proposed setup is, when the sun is shining, the fan will turn on. Maybe after the wood is dry, I could just not use the fan to heat it up to kill any bugs?