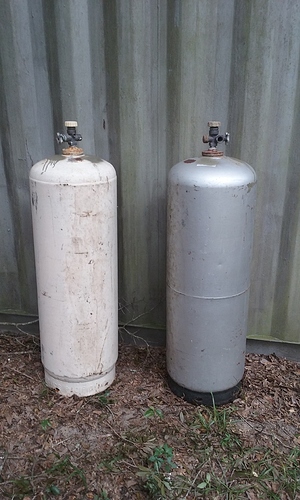 I managed to snag 2 tanks at a good price. Now to fill with water then cut these bad boys up.

I guess I am looking to see how others have done theirs.

Pull the valve, let it air out for a while, half cup of baking soda + a cup or so vinegar… makes lots of co2.

It’ll leave a bit of a mess inside but it does wash.

Does the soda help with the old rotten gas smell?

Lol… no not really

That… is just a great idea. CO2 from soda and vinegar. Brilliant!!!

Thank you that is an excellent tip!

You know that gives me another idea. I could make a mosquito trap with vinegar and baking soda since they are attracted to co2…

I prefer the idea of filling with water, visually verifiable that the precaution against blowing yourself up worked. I like the idea of the baking soda and vinegar, I just won’t trust my life to probably. This is the same reason that I don’t use exhaust gas, what if the engine is running rich or I haven’t left it long enough or there is an odd atmospheric condition that left explosive gas trapped. I cannot verify a non explosive situation with a gas, I can with tap water.

I agree, the smart money is on filling with water!!!
Why take a chance when you don’t havto!!! Herb

What Herb and Mr. Barnes said.

I have built several gasifires using propane cylinders. Obviously open the valve up and release any pressure. Then take the valve out. I usually stick an air hose in the tank to the bottom and run the air for a while to purge the tank. Then go to work. I used to have a website with all of my builds but the server company sold out and they dumped all of my websites. I think Chris S saved a pile of my files and they may be here somewhere. If you can find older tanks from the 1940’s they are much better to work with. The newer ones have a coating on the metal. Retiring on Friday. Regards, Mike LaRosa

Congratulations on your retirement, I know you will still have some work to do, but it will now be what you want to do and may be make a little money while you do it. It will give you more time to play with the gasifier. Best wishes to you.
Bob

Back in the 70’s when I had my Welding/Machine shop I repaired anhydrous ammonia 1000 gal tanks, had to be certified welder and trained in this procedure! I know they are different animals but correct procedure was to fill with water, set 24 hrs and cut an oval hole big enough for a man (or woman) to get into!! Usually the problem was a broken baffle, I would weld the broken baffle, get out of it and weld the oval back in, fill with water again and put under pressure, had to hold the same pressure for 24hrs!!! Was the fastest money I ever made in my shop! Herb

I’ve used water, heck I’ve even let it freeze inside the tank and cut the rank with a block of ice in it.

Never had a problem by displacing air in the tank with co2… propane needs oxygen to burn after all.

The old odorent is a pain in the butt but you can usually dump that out after you remove the valve. There is usually a small puddle in there that holds some propane. Use water if you worry about it. Once you cut the tank you can dry it out. Hi Herb. Thanks again. I didn’t get rabies from that rabid cat that bit me when I fell asleep in my chair right after you dropped me off … I was real tired. Fortunately I had been bitten by around 50 bats when I was younger in the furnace business and never wore gloves. Stay well all, Mike

Ok valve is out and I have filled it up with water for a couple of days. Now I want to think how I am going to cut the top to get a spring loaded lid…

I am thinking of cutting the top just below the lid and flipping the top upside down.

This is very very interesting → http://opensourceecology.org/wiki/Troy_Martz_Gasifier