I broke some new ground today with my everyday wood powered truck. My f150 is my daily driver now that the GMC is missing in action. I now have over 5,500 miles on the truck straight woodgas and still running strong.I have the tachometer pinned at 5,500 for a length of time on the video below. And It has been over 1000miles since I had to dump my char. Has anyone else been able to reproduce these results?? Normally 300miles is the max on my unit BBB SEAN 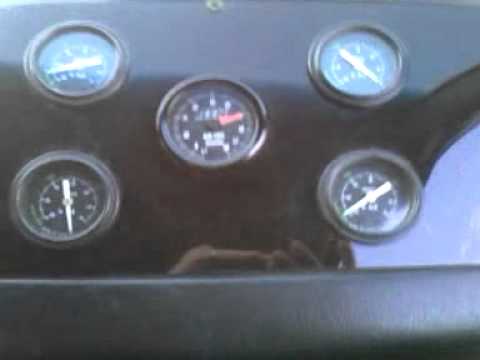 You got it going on!!

That is where the rubber meets the road.

I hope to be driving my new one this weekend.

I hope to get some work done this afternoon; I have some folks coming in from Arkansas to look at wood gas this morning.

Sean, What killed the GMC ?? I already know I will have to replace the air cleaner housing on my truck. Once that paint comes off in there it’s all over. Be careful on those RPM’s. I know the tachometers set the red line around 5000 RPM but years ago it was around 3000 RPM and I really don’t believe the engines have actually changed that much. After breaking a connecting rod on my 95 olds I will keep the revs down on all my engines. That was a fine ride on 5 of 6 cylinders as oil was getting sucked through the hole in the piston into the other cylinders … We made the last 60 miles home … Oh, supposed to be in the 60’s today … Enjoy your warmth … Can’t look at your video, wish I could … Off to Milwaukee for the grandson’s first birthday party … 280 miles of gasoline … ouch …Mike LaRosa

Hey Great video SeanF.
Thanks for keeping them short. The Rural living guys actually going to be the majority having the on site fuel to do wood driving are in most cases “out in the sticks” on copper dial up. Given a choice between a hundreds dollar a month satellite set-up and more chicken/goat/cattle food, fencing, etc; the one is income capable and you can eat the results, versus the other as just an after taxed expense removing money from your pocket into someone elses pocket with the governments always in between taking their cuts.

Good Afternoon Wayne,
Thanks for the reply!! I had my buddy do the filming on this trip it was his first time in a wood powered truck. Good job on the new dakota I am sure it will be running down the road shortly. Let us know how it turns out. SWEM BBB SEAN

Hi Mike,
The gmc suffered all it"s life when I bought it as a woodgas test bed the odometer was frozen at 775,215. Just slap wore out engine,transmission,electrical,brakes, if you can think it that truck needed a new everything. I did the best I could to keep it on the road as long as I could when I changed the engine to a fresh built 350 v8
that was pricey. Then 2 weeks later the transmission blew up now it was just turning into a rusty money pit. And I couldn’t waste any more time or money on it. It’s a shame because that gmc will out work that ford I have any day. I normally don’t drive that hard just for testing purposes that’s a ford v6 in there they have had alot of problems with them most of them die after 60,000 miles I am at 127,000 borrowed time already. Anyway I am still in my prime and if the engine dies on me I will just change it out for a new one probably get it done in a weekend or less.I really liked the gmc so I kept most of the good parts and recycled them to make an 80kw generator. I will post more on this build once it painted and running on woodgas Sean BBB Hi Steve,
I am glad you could see that video I try to keep them short for dial up users. As a bonus for me I have been filming these clips with my cell phone I too have limited internet and it is easier to use the phone and upload the video directly to youtube

I think the little Dakota is going to do well. I drove it some today and will put more miles on it tomorrow.

As promised an update on the big wood burning generator. Finally got the painting done I really missed my red truck when it broke so I kept all the parts I could use and recycled the truck into a 3 phase generator. When complete I will have 480 volts down to 120 volts. Able to run 10 houses at the same time.Still waiting on some last minute parts to arrive before I fire it up on wood. Had her running on gasoline the other day got 50kw out of it. BBB Sean So the f-150 is going under the knife today for some improvements. Managed to find a new intake for the truck that is made of aluminum off of a 97 ford. I was looking the intake over yesterday and looks like it will bolt up to my truck. I will keep you all posted on how this project goes and put some pics. up later. Thanks Lou Wright our conversations is what made this change happen. BBB Sean Okay the f150 survived surgery the intake from the 97 bolted up to the 2003 with little modifications. Here are some pics. Taken at different stages of the build over 5,000 miles driven on Woodgas BBB Sean Also a few have asked for pics. On my lids and seals that I make well I did one better for you all I had enough time to make a video today explaining the process. If anyone has trouble watching the video let me know so I can fix it. BBB Sean

Great video Sean, that is a great help for future work. I too am in Florida, thanks for the heads up on keeping everything inside the bed. They have places I would like to see and do so on wood gas.

Thanks for posting the video.

Sure wish you and Woody could have made it up to Argos!

Hi Wayne,
Sorry we couldn’t make it just too busy right now trying to get finished up before the dog days of summer are here. Making great progress though.
We will have to get together soon. BBB Sean

Thanks Sean for getting the video up. It is a big help.

Hi Sean,
Appreciate ya taking the time to video!
Good stuff.
I too am having to look at most of the gasser being mounted in the bed and out of the cold.
Different world up here.
Any tips you would like to share regarding that?
I’m thinking of a modular enclosure supported by the cooling rack, removable in warmer months.
Thanks again for the video.
TerryL

It’s my pleasure glad I could help you all out.
Keep up the good work with all of your builds the end result will be worth it.
Good to hear from you TerryL could you be more specific on what you are trying to do ? I am not sure I am the right guy to be talking to about enclosing a gasifier unit. We don’t get much cold down here so I really don’t know what problems would happen to a unit in those low temps. As far as keeping the unit in the bed I will put up another picture on that. we try to keep the unit flush like Wayne does on his trucks. Almost always the gasser will be 4-5 inches over the cab. The only work that is under the trucks is the plumbing from the filter to the engine. Even changed the condensate tank so it can be in the bed doesn’t leave much room but we make do. Regards Sean