As I am welding the internal component of the large heat exchanger I am having trouble getting it to test watertight. My question for you all is which parts must be watertight in order to prevent explosions, and which parts can be close enough? For example I’ve heard Wayne say that the spray paint will help to fill up any tiny pin holes. But a hole in the wrong place could blow bigger holes in the system. 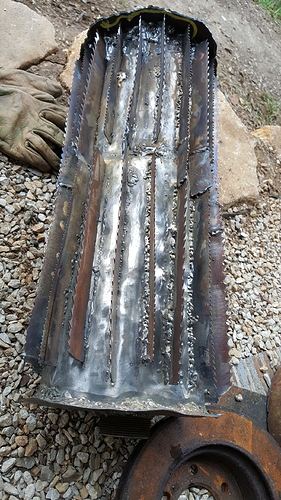 If water is just seeping I wouldn’t worry to much about it. Also you may be able to spray some heat resistant paint on the inside and outside of the heat exchanger to help seal it.

I don’t think a very small leak on the heat X would cause an explosion but it may dilute the gas but might not be enough to be noticed .

If the heat X reaches the ignition temperature of the gas it is likely a small flame will form at the point of the leak which would weaken the gas and raise the gas temp going to the cooling rails. Again , it might not be enough to be noticed just depends on the size of the leak .

After the gasifier has been used for a while you will be able to look down in the housing and see if any air leaks have fired up . The heat X should be covered with black soot . If a pen hole has formed and gotten hot enough to catch fire it will be white in that area . 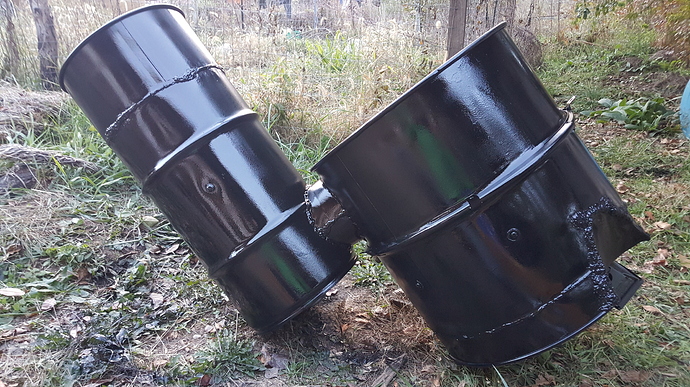 Looking good Amurphyone. Remember, the nice looking black paint on your gasifier will soon be matching the tar and soot, that will be getting on it and that is good. That’s why Wayne decided to paint his WK’s all black, and the rest of us have follow his good and sound proven idea. There are those who prefer stainless steel, but we don’t hold that against him. Lol… I even have some stainless in my build, but you can’t see it.
You will soon to be making a big SWEM going down the road.
Bob

Thanks Bob. I chose a black truck so it hopefully all blends together as others have done.

I have a new concern as I’m getting close to finishing the plumbing of my 95 Dakota gasifier. It’s this: can I use soft rubber tees or will they collapse under vacuum (before and after the hay filter)?

I think you should be fine with those rubber tee’s, but to be sure you could rig a test with a hand vacuum pump and one of your gauges.

I think the rubber Ts would be OK as long as they are in the system where there will be little heat . Anywhere that pvc is used I think they would hold up.

I used some rubber Ls on my hopper tubes and after time they began to collapse . The temps in this area occasionally would rise to around 250-300 F.

Ok. Thank you. I have tried to minimize large rubber couplers like elbows and tees.

Problem: i wired up a cheap aftermarket ford headlight switch/dimmer and hooked it up to the green wire with black on the Dakota. When I turn on the rotary potentiometer the coil analog dimmer coil burns to glowing hot. It operates as planned slowing the fuel pump down…but if I leave it on for more than 5 Seconds it will burn itself out. Can anyone recommend a dimmer switch that may work better for this truck?
Thanks
Aaron

If I need to hybrid drive I turn the switch on full and let the truck computer take over .

In my dodge ram I am using a ford headlight switch from a junk truck from the late 60s. I have about 5-6 years of driving on it with no problem .

All my other vehicles I have used the headlight switch form a junk dakota ( mid 90s) . I have had only one to go bad and my son was doing the driving when this happen.

Hi Aaron,
The Reese Towpower 74642 Brakeman Compact Brake Controller is the easiest to start with. It is heavy duty. This will get you there: http://forum.driveonwood.com/t/pwm-fuel-pump-controllers/1111 scroll down to the second entry. We’ll help if you have more questions.

Would something like this work too? It says its PWM…

Thank you Wayne. I will just use it like an on-off switch until I figure out something heavier-duty 4 hybrid driving.

Thanks Carl. I will consider modifying a hauler brake!

I agree with Al. Mine has worked flawlessly for almost 3 years and 7000. Miles
I like the price also

These PWM units look perfect and more of a dedicated use than the trailer breaking device.