A thread for blacksmiths by Jesse North

Hello, this is Jesse. North. I am also known as Jakob’s little brother. Before the trip to Argos I was building a charcoal forge. Below are some pictures of my forge. I talked to some of you at Argos already. If anyone has some advice for me, I would be happy to hear it. Also, you can post pictures and information about your own forges, black smith projects, or casting projects. 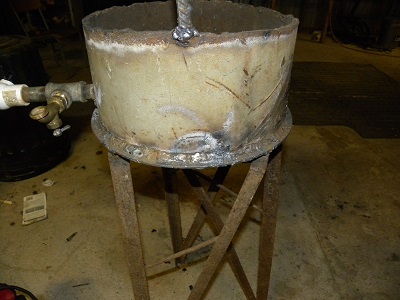 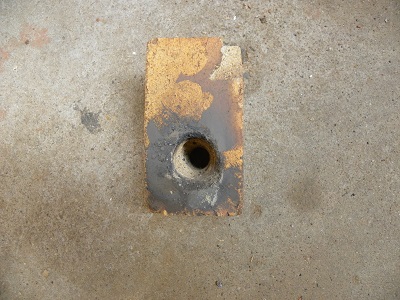 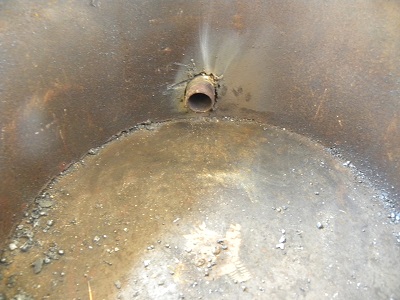 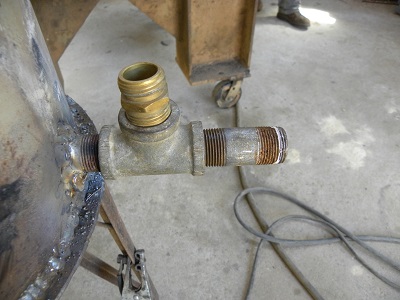 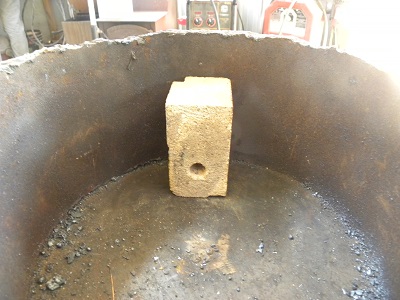 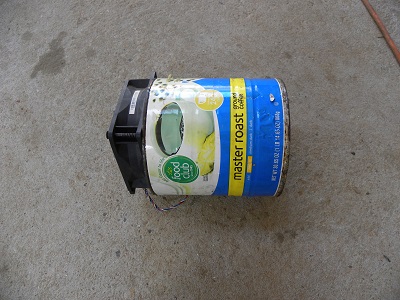 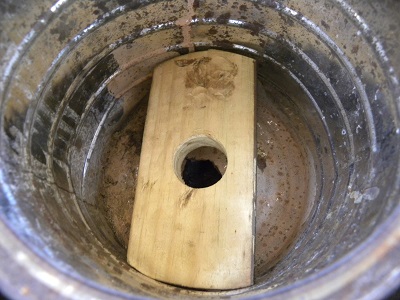 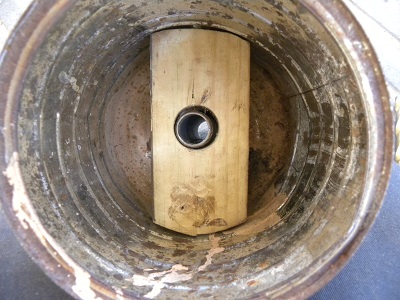 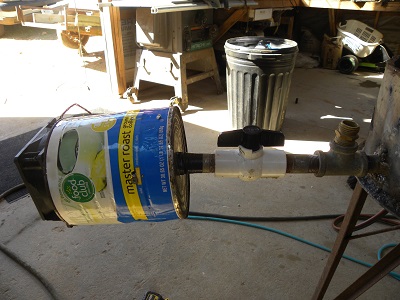 I want to learn how to make knives, and maybe do some casting like some of Handy Andy’s stuff. Maybe later on move on to decorative iron work.

I will try to post some more pictures when I can.

My forge is made from Jakob’s left over pipe from his truck build, some pipe fittings, an old computer cooling fan, a coffee can, and an 1/8" steel plate. The legs are made from part of an old mobile home frame. I also a fire brick that I drilled a hole in for a nozzle.

Thank you very much.
Jesse

Looks good jesse! I look forwart to seeing what you make.
I reccommend this book for anyone intersted in blacksmithing. 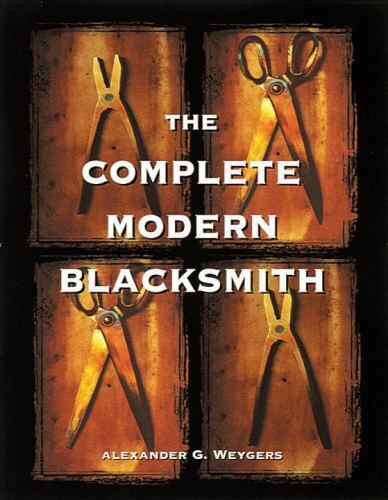 Find many great new & used options and get the best deals for The Complete Modern Blacksmith by Alexander Weygers (1997, Trade Paperback) at the best online prices at eBay! Free shipping for many products!

A chum of mine who passed away gave me some smithing stuff.
I made a forge from a truck brake drum and tinker.

Observations:
It really pisses off the neighbors when the wind blows the wrong way.
You need some real coal, the stick bituminous kind to keep you fire formed and shaped the way you like it.
Neighbors are particularly upset by the gasses off coal…
Charcoal works but its crumbly and hard to keep the fire where you want it, mixing some of the coal fines I got my my late chum makes the stuff clump and stay together more easily

I should have bought some fire brick and thought about this more, researched it a lot more too.
I don’t know about books I tried to research everything on youtube with mixed results.

I did manage to learn a little about heat treat and shaping metal.
If for no other reason you have a forge is to get a whole lot more heat on something than a torch can provide alone is enough reason to have a small forge.

I have a anvil that is a 100 lbs it is steel. I lit it up a few times using charcoal and it seems to work fine.
Jesse

One day I walk into work and sitting in the plate shop is a huge cast iron monster anvil on a large wooden base.
It must have weighed several hundred pounds.
I thought WOW those guys in the plate shop are getting seriously into something I need to watch…

Turns out the engineering dept has this ceremony there a newly minted engineer taps his iron ring on the anvil is some sign that he is now qualified.
I thought to my self wow, these guys really are geeks…

Goes a little like this I think, I never attended one of this shin digs. 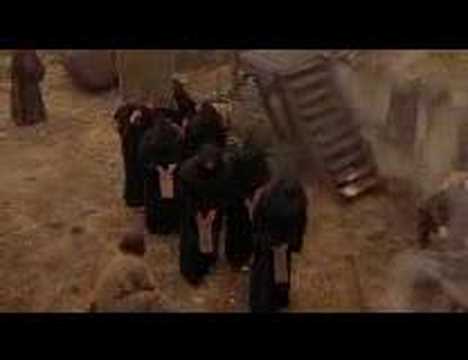 I have a few things about blacksmithing on my website, here:

Blacksmithing craft education and metalworking are what this page is all about. I cover blacksmithing how-to articles, blacksmith tools and other blacksmithed items I have made using hand hammer, treadle hammer and trip hammer.

I wish you fellows lived closer to me.
Individuals with skills and ideas I could never got board watching.

Thanks for the link Pete lots of stuff there to review.

I love the home made leaver lock.
I am interested in locks ( I pick open, re key them make repairs to them at work… in my official duties as plant electrician ) but never even considered making one

My forge is made from Jakob’s left over pipe from his truck build, some pipe fittings, an old computer cooling fan, a coffee can, and an 1/8" steel plate. The legs are made from part of an old mobile home frame. I also a fire brick that I drilled a hole in for a nozzle.

I did the an off-take of the mini-metal foundry, and used plaster for a coating on the inside, there are various other materials you can use, i wouldnt use plaster again it flakes off easily. The computer fan is probably what I will use next, the hairdryer I used pushed too much air. For a forge, you might need something to control the airflow, which I think the valve you have should work fine.

For the foundry, i put the air inlet in the side, I used a 1 1/4 short nipple welded on to hold the 1" pipe nipple. basically so I could easily remove it in case the molten metal leaked, and filled it up, or the nozzle burned up, or I wanted to convert it to propane. Every tin can I have tried to use as a crucible has come apart and I end up hammering the nipple out. lol

I wish you fellows lived closer to me.

Where do you live Wallace?

No but little black ones that steal your garbage bags on Fridays morn.
I have trouble eating wild game and have a sense of guilt about most meat.
But if you stuff one of those little black bears in a sausage case I will be over for lunch.
Deer too!

We have a few of those little guys here on the mountain. But we don’t hunt them because they are too few this far south. Occassionally someone will see a big male roaming down from up in north Al or Tennessee. But mostly just a few little families of them. I wish we had more of them. I lie to eat them too. Also, we have been seeing more mountain lions around here the last number of years.

European bears have learned and maybe developed an evolutionary adaptation to be wary of people.
The mothers keep their cubs longer hopefully to teach them.

I don’t like to see any animal suffer an unnatural and avoidable end because of an interaction with people.
BUT…
Always a but with me.
They do taste pretty good. ( sausage or roast they are nice eating )

I respect the bears. My Cree ancestors, and just as likely my Scottish ancestors respected bears. They are physically built much like a man. If you ever come across the bones of a bear in the woods, as I have, it’s startling to first determine if they are human, very close.

Apart from that, I respect their intelligence, they are easily as smart as a dog, and more, and in the realm of a 2 - 3 year old child. And we all know what they are capable of. That’s an incredible wild intellect.

So I highly respect the bears. I would only conflict with them if they break an electric fence, or otherwise menace people directly. Spiritually they are considered our brothers. I respect their quiet ways turning stones foraging for ants and eating chokecherries. I’m less fond of them chewing on propane hoses and door knobs, or turning over pails of hydraulic oil, or wrecking my corn, but I will accept them as I would accept my own dog. They belong in the world I want to live in.

I needed to bend a heavy piece of steel. So heat. I came up with this setup and bent the steel in a single morning. I used parts from an old water heater I scrapped. It heated it up fast, about 10 minutes
Rindert 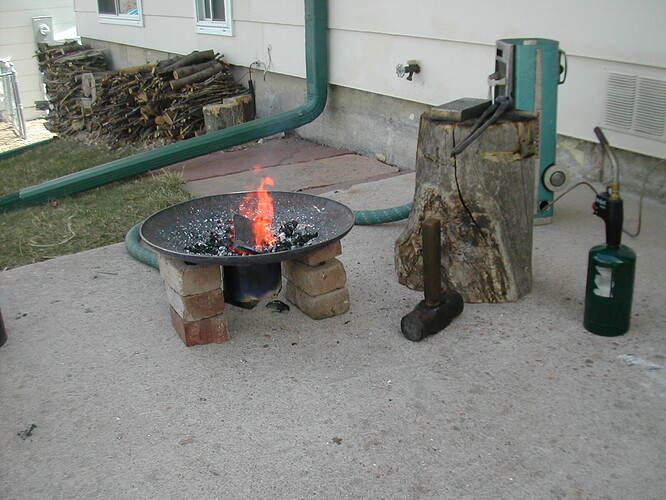 I hope the Mountain Lions come back to Western NC. I’m sick of these coyotes.

I’m sick of these coyotes.

My older brother is talking about trying to eat them. Its not enough to just shoot them anymore… I think this Covid thing might have something to do with his malevolent attitude though…

I wouldn’t eat an opportunistic carnivore like a Coyote. Their pelt however can be worth some money when done right.

Their pelt however can be worth some money when done right.

He’s already doing that part…
When I think of the things we grew up eating…
Well nothing surprises me with my older brother.