Just trying to get my head around some things… I was in on the hangout and the talk came up of using different metals for different purpose in a gasser build.

My understanding is also that condensate after the hearth will be base… would that be caustic potash / potassium hydroxide? If it is then I now partially understand why you may not want to use aluminium down there…

… but may want to use it up top… just kinda rambling thinking here… anyone else’s thoughts?

Arvid, It is true about the acidic/base condensates.
I think the reason for people to be warned about dumping hopper condensate is the acid.
I mix my hopper condensate with my cyclone dump to balance the mixture. You need room for expansion, for it does foam up.

Mike L knows well of aluminum downstream. He was offered aluminum mesh for a filter. It got ate up in quick measure.

the topic of different metals used in gasifier construction came up… and while aluminum doesn’t seem to be bothered much by acetic acid… the base part will degrade it… and make Hydrogen… Hmmm who knew… maybe another way to suppliment hydrogen production in a gasifier… what where the other byproducts now?

Interesting discussion last night, I appreciate the input. I’ve decided to make an aluminum hopper, lined with SS foil, glued in with Gorrilla glue, painted with ceramic high temp paint, and burn nothing but pine to establish a thick coat of tar! LOL just kidding. I am one step closer though, with a working furnace in the shop. If only I could afford the propane.

Hey Carl, how many trees will it use once you do that?

Hey Carl, We are burning a whole elm tree one piece at a time. The inside of my hopper is coated with a thick layer of black tar. Other than 2x4’s the first day that is the only wood I have burned so can’t say about the miles per pound.
Garry

Arvid, it does appear that aluminum corrodes with alkalines pretty easily. Those of you with dishwashers have probably seen this regularly (DW soap is alkaline).

Has anyone tested the actual PH of the condensate from the tank?

It definitely reacts with hopper juice, like Terry G says.

and makes hydrogen… that’s what i found most interesting… I’ll make a video explaining that just to see how many people out there in youtube land believe and start trying to increase hydrogen production from their poorly designed gassers…maybe i can be famous just like that mr. teslonian fellow… just kidding…

This link may explain what happens. 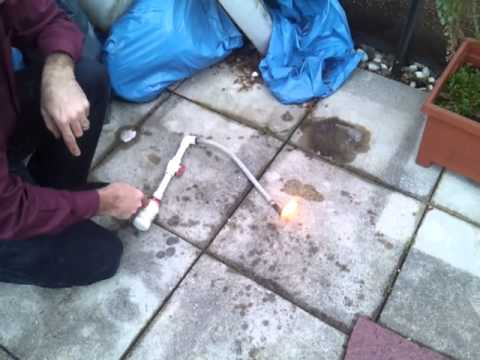 Thanks for that Dave… things that make me go Hmmmmmm…

At some temperature, the ashes will partially turn into calcium oxide as well ( AKA quick lime ) and will react with some stuff

Chemistry has so many interesting byproducts

Best way of disposal: use as herbicide and or as pesticide ( condensates )
use as soil stabilizer (ashes)

also the different feedstocks will give very different chemicals …

I just did a start of a test .By taking gasifier condensate putting it in a bucket and putting aluminum foil in and so far it has done nothing to the aluminum.
So maybe its not that caustic …
I’m going to leave the aluminum in it over night and see what it does …Its been in the mix for about 30 mins now and so far nothing has happened…
Heres a short vid clip of it … I will update with long term results …
This condensate is from burning pine wood … 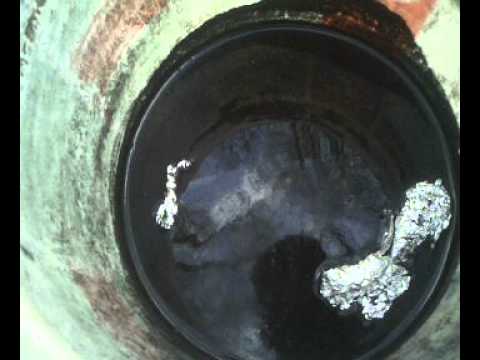 condensate from which part of the system Johnny?

That is condensate from the lower condensate tank, the one off the rails under the truck …I am going to test with the hopper condensate also maybe tomorrow if I get the time…
The aluminum has been in the mix around 3 hrs and still nothing has changed …No bubbles ,nothing

The condensate post gasification ( condensate from the lower condensate tank, the one off the rails under the truck and hay filter ) doesn’t seem to kill the grass .

The condensate from the fuel hopper I use to kill weeds .

That is real interesting. Keep it up. You may be opening a new chapter in gasification, ya think?

Wayne,
I am just trying to see if it the lower condensate will corrode aluminum…If it can be determined that it won’t , then it would be possible to make the heatX, and the rails out of aluminum …This would cut down on weight considerably and would also dissipate heat more efficiently…Not really sure on cost comparison but I do think if a gasifier could lose some weight and gain more heat exchange efficiency ,the over all system would be more efficient…
Just a thought for now…

It’s been about 5 1/2 hrs so far , and the condensate hasn’t had any affect on the aluminum…There is no visible deterioration at all…
Will update tomorrow again , but I am thinking there will be no change ,its just aluminum foil and I think if it was going to eat it it would have already done it by now because its pretty thin stuff …

Hey JohnneyC you’d need to heat and stir circulate the condensates to even be close to simulating operating conditions.
Chemical reactions greatly increase with these energy inputs.
I used to after midnight graveyard shift “free” cafeteria triple lemon slice hop-up, wake-up, my hot teas. That was with the hot capable paper cups. They changed to syrofoam hot cups. I kept “melting” the bottoms out of the new cups until I figured out it was the hot acidic lemon slices. Stopped that nonsense realizing what I was doing to my teeth.
Gave me a much greater appreciation for the 19 tank dip/dip line used to clean and etch silicon wafers that I back up operated in my area. Heated acidic acid and heated soduim hydroxide gets very active indeed.

On a gasifier system the best way to material tests is to put in sections of piping in the gas flow of different materials.
Aluminum pipe, copper pipe, brass pipe, black gas pipe and unions of the same along with bronze. Real eye-opener.
If you could afford it you’d make the whole downstream system out of bronze and the upstream out of stainless steel.

Thanks for the input Steve ,

I didn’t take into consideration the heat going thru the system …
The condensate was warm when I stuck the foil in it , I had not long come home from a ride…
I will try heating it tomorrow evening and see if I see changes…
I think I will also throw in some aluminum in the hay filter and the heat x and drive around with it in there for a few days and see what becomes it …
I’m just real curious about this, and am the type of person that has to try it for myself .
Just looking for lighter weight and improved heat transfer possibilities for my next build later down the road maybe and if nothing else I just want to know.