I am definitely addicted to harvesting charcoal. Since the arctic cold snap started I have been scrounging to harvest a 5 gallon pail a day but by yesterday I had completely filled my two storage barrels with ashless raw charcoal and my cooling pail was full as well. No storage left, no harvesting possible…until I just went out for the last furnace filling of the day and found at least 10 gallons of bright charcoal taunting me with flickering blue flames. I couldn’t stand to just cover them over with fresh wood so I managed to put the whole 5 gallon pail of unsifted charcoal into my sifter and shoveled five gallons of clean hot coals into the cooling pail. Now I have to get an empty barrel by tomorrow.

Wyatt I will drop off an empty barrel tomorrow if I can. I know it means more finished charcoal for me. Bwah Hah Hah!!!

If you bring me an empty barrel you can take away a full one. Happy New Year or solstice or something.

David, if you bring me a steel barrel you can take the steel one otherwise take the plastic, I can transfer cold from the steel to a plastic to make room for hot coals in the steel. You still have the locking ring for the steel barrel.

I do wyatt I just have to trudge out to the scrap pIle. I gave you your ring back…

Then feel free to take the steel barrel, but you need to bring a locking ring. You will definitely need help loading if you don’t have a ring.

Wow sounds like someone needs another gasifier to run something…

Shhhh! Don’t say that dan if he goes and does that my supply will dry up…

I am currently using a plastic lined paper leaf bag for temporary storage of cooled charcoal. Both my barrels, my cooling pail and sifter were full so rather than not harvest I started dumping cold char into a large bag that I saved in the fall. I think I now have half a bag of charcoal that I would have missed due to lack of storage.

This is the leaf bag that I have been filling since I ran out of barrel space. 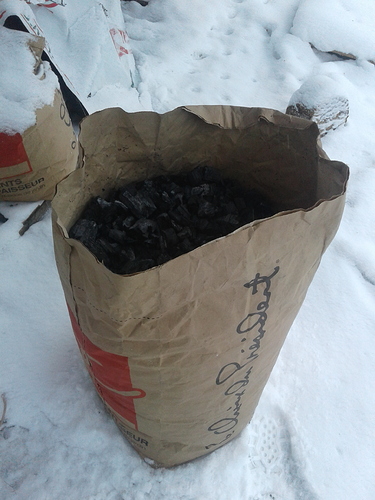 And this is the barrel that David brought me this morning after dumping the leaf bag, sifter and cooling pail into it. 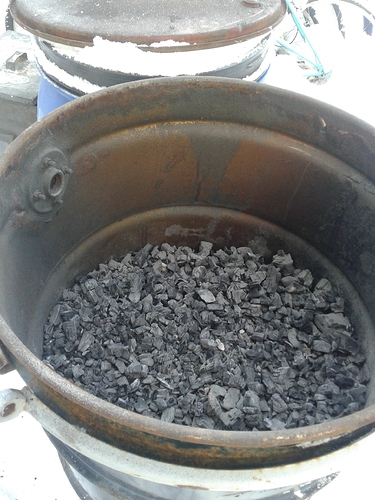 9 days ago I started storing charcoal in a bag since I needed a barrel. David brought me a barrel and it is now full and I am back to a bag again. I sense a pattern.

one of us needs to start burning some charcoal!!! At this rate we will plow acres not a quarter. You are going to have to clear scrap.

I could blow snow if I had the rig finished. I put my three point tow behind on my Cockshutt tractor. I will try to get your barrel back to you, i need room for bags.

Are you guys using this char for engine fuel?
The car I pull out of the furnace seems much softer and don’t have the broken glass sound like what I cook in a vessel in the furnace. I was just going to use the soft stuff as grilling and bio char

Engine fuel Jim, small and tractor. It seems the same as retort char to me although I have made more in the furnace than in my barrel retort. If it has problems as engine fuel we are going to have to do a lot of barbecuing.

I was just thinking it must be a little less energy dense. I guess the weakest will turn to dust in the processing and all the tar should be cooked out for sure. It’s the easiest way to get it for sure and I am all about using the heat. I resealed my stoves this year and can easily make it like this just turning down the thermostat. I guess I will mix it all together and keep on harvesting while it is in season too. I have made 50 gallons over the last week, I have a few different engine’s I want to try.
I have a few ohv engine’s now. I have run 5 different engine’s on char gas but not an ohv nor generated AC power. One of my new ohv engine’s is a twin cyl too so another first.

I thought afterwards that I should have replied, " Damnit Jim, I’m a doctor not a chemist, oh wait, I’m not either. " Not sure how star trekish you are. I am relying on David Baillies judgement on the charcoal, under the bus he goes, since he has lots of experience compared to me. Ask me in six months and I hope to be able to give an informed opinion of my own.

Only if it’s a char gas bus…
I think it depends on what you char. Some woods seem to be very closed cell and kind of popcorns out and get fragile. The softwoods seem to have larger cells so get kind of light as everything boils away. I don’t know, it would be nice to know what others think these are just my observations.

And as to the char I am harvesting from my furnace due to the nature of firewood log loads I have maple, beech, ash, white birch, yellow birch, maybe the occasional oak and black cherry. Some of the wood will be punky, a fair amount of bark, lots of knots and some burls. This must produce a certain amount of variation in the char as opposed to someone with a mono species supply.