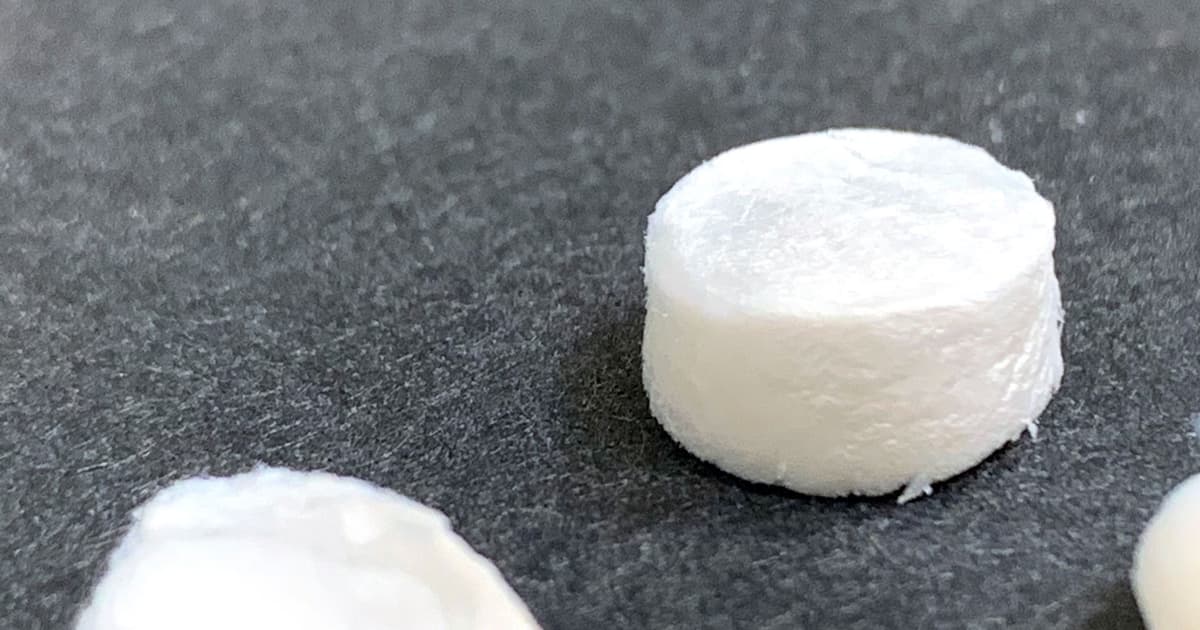 Ceramic aerogels have been protecting industrial equipment and space-bound scientific instruments for decades, thanks to their incredible lightness and ability to withstand intense heat. The problem is they can be pretty brittle. Now, a team led by...

I learned what happens if the burrs are not removed when using back washers with rivets. Silly me. The middle rivet hole had the drill burrs removed. 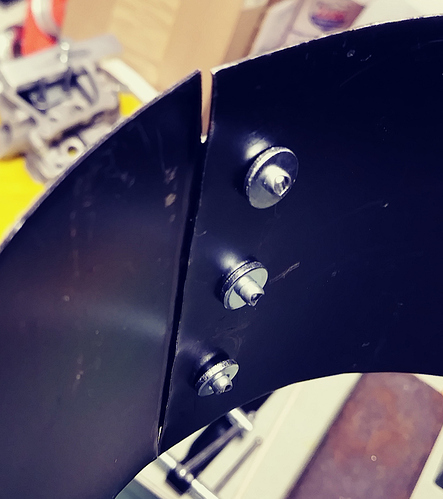 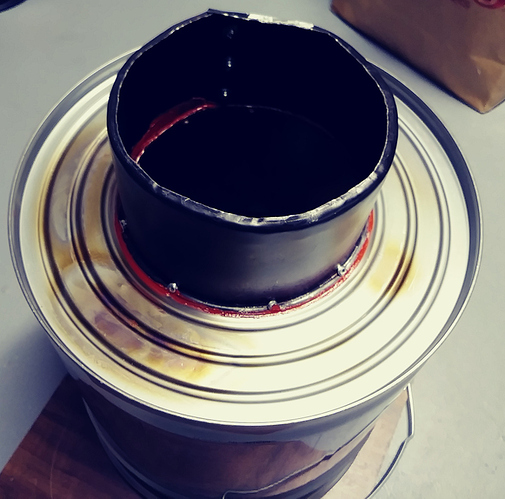 Affordable PLC could become handy at times. Here is an intro video:

It is neat, it is just an ARM microcontroller chip like on the microbit and there are some ARM arduino compatible ones. The atmel/arduino is a microcontroller as well. It varies from the ARM chip in the raspberryPi because it has real-time clock like the arduino.(arm has IP for both microcontrollers and applications processors.) However, the Raspi, can be made into more real-time system with a RT kernel patches or with the quad cores, you just dedicate a core to the application you want. The rest of it is just the goodies they added with the exposed headers. For instance, you can get an i2c can-bus chip, or DAC /ADc for fairly cheap to add on. The software looks pretty neat as well.

It just isn’t what I think of as a PLC.

I do not like this toxic ceramic blanket any but it might buy me some time while working on the carbon foam. I bought a quart of the expensive rigidizer and applied it to the blanket. It becomes more fragile, I believe, then the carbon foam made from bread. Easy to put your finger through. 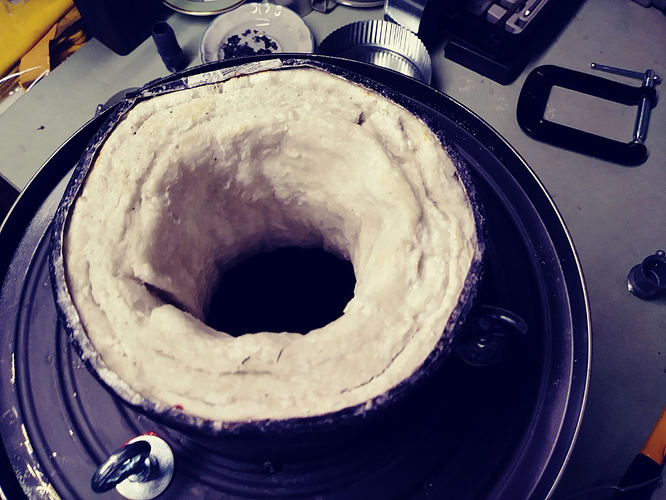 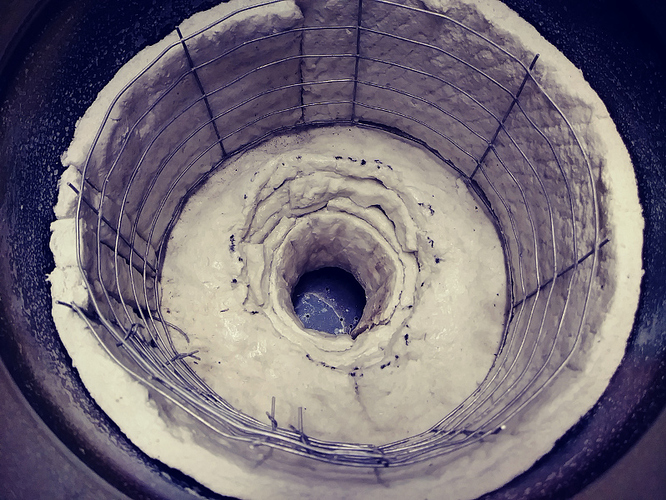 Opening is too large. Closing in with furnace cement: 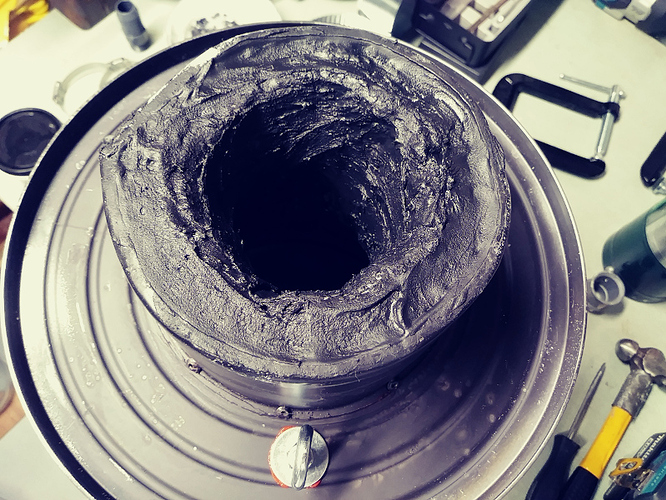 Becoming a sheet metal junkie. I see myself joining the stainless steel gasifier group. A lot of sheet metal can be stored in a small area as compared to tanks. Surely there will still be a use for some old tanks.

The cooler is stolen from the wood stove people. They call this design a bell or stratified flue gas heat exchanger. The idea is that the hot gas will rise to the top and as the walls of the cooler cools the gas this cooled gas will sink to the bottom. 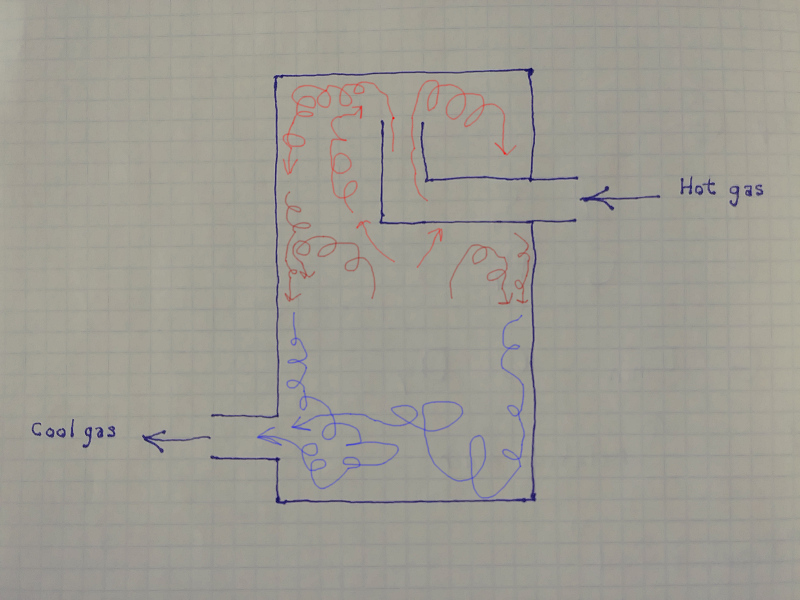 Who needs plastic when you have sheet metal that will flow: 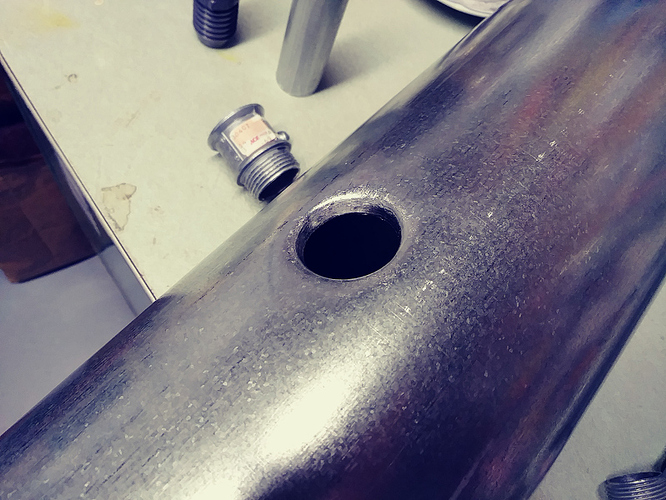 These conduit fittings make a nice connection, rather tight. The hole is flared with a ball pen hammer. Also add silicone sealant. 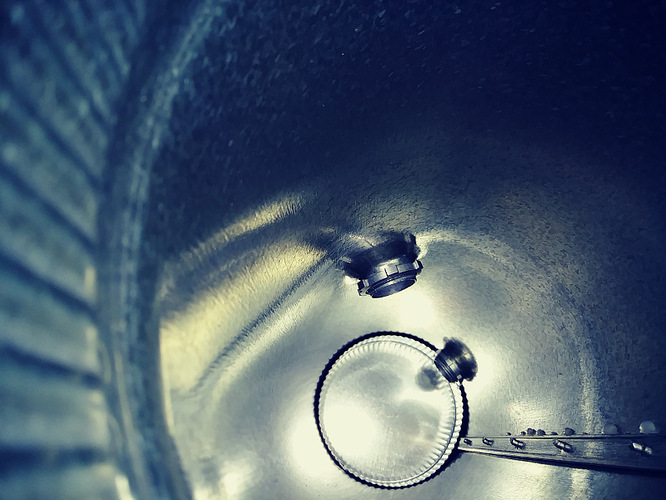 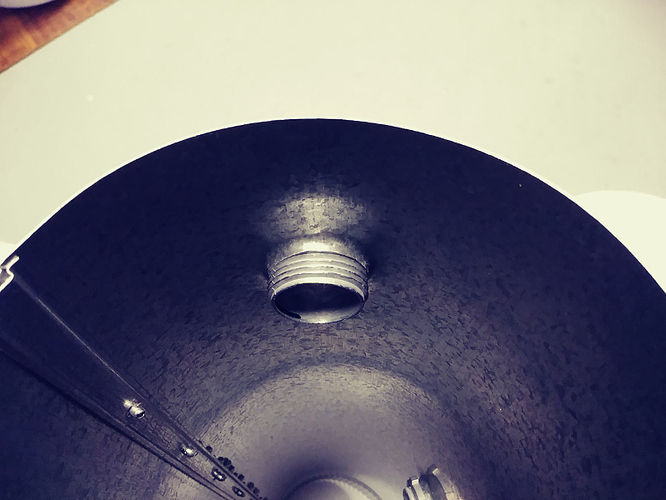 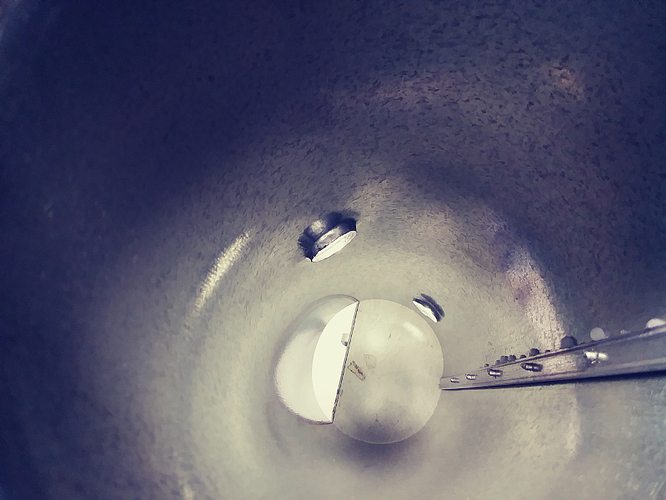 The cooler is just hanging from the loose pipe connection. That explains the tilt.: 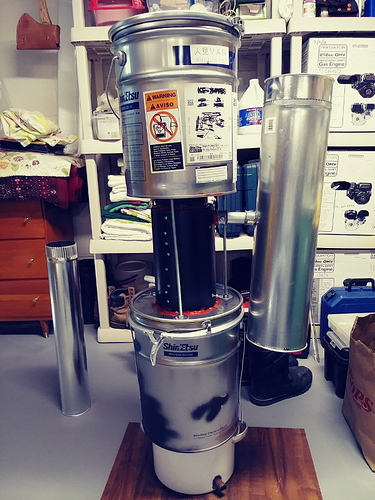 No idea how well this cooler will work…

Opps. I forgot the elbow: 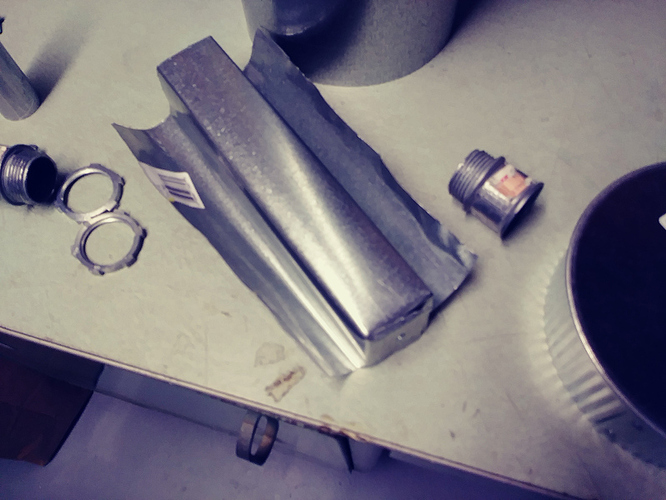 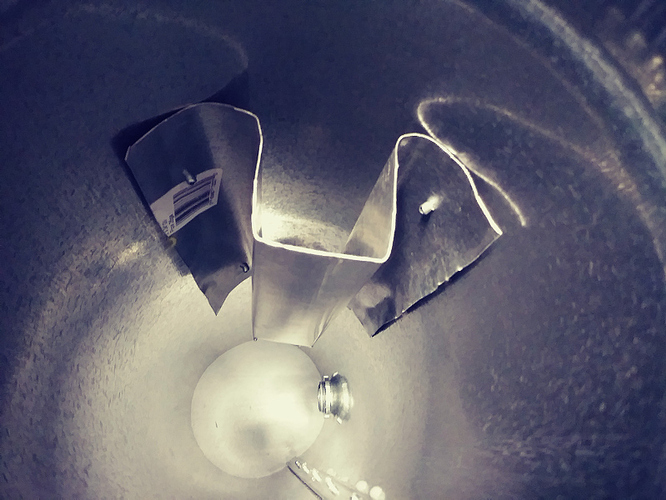 Reading through Bob’s build I found a link that Garry, @taitgarry00, posted. Gives some hope for the stratified gas heat exchanger. Possibly, as the moist hot gas looses some of the moister to the walls of this thing this gas will be displaced to the bottom a long with water running down the sides.

Why dry air is heavier than humid air

The assumption that humid air is heavier than dry air is wrong. Learn why...

Giving a band seal a try. The pipe seams are a pain in the butt but for now that is all I have. Decided to order (later) a small 24" slip roll and go with stainless steel. 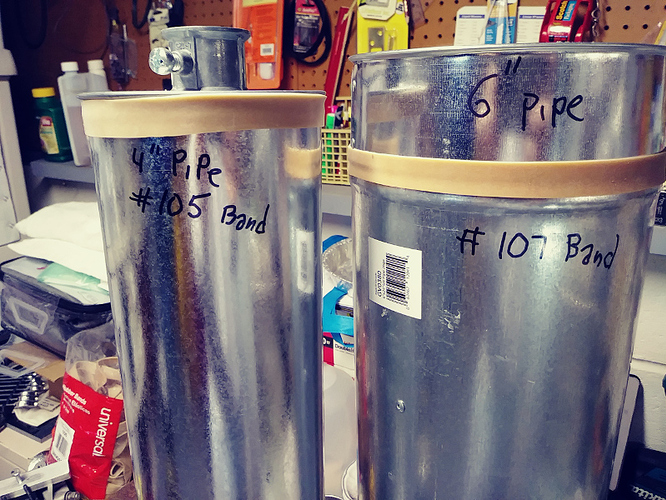 Hand joggling tool showed up. OK for small projects. This $25 tool looks identical as the $85 ones. 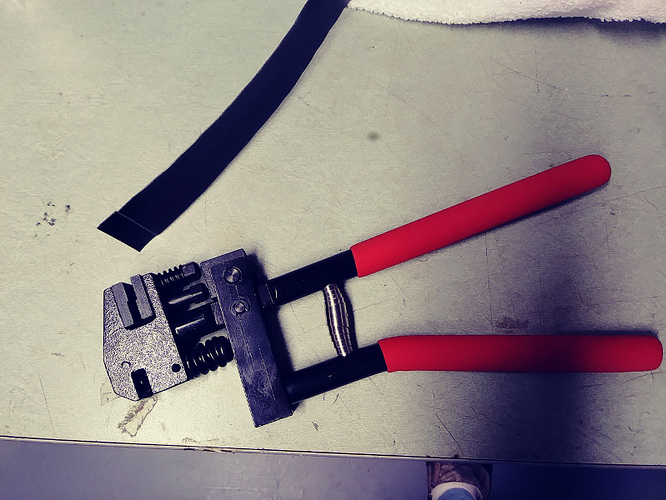 Hit the furnace cement with a propane torch and it got warts. Must still be moist behind the cement. I’ll have to try some kind of slow bake. 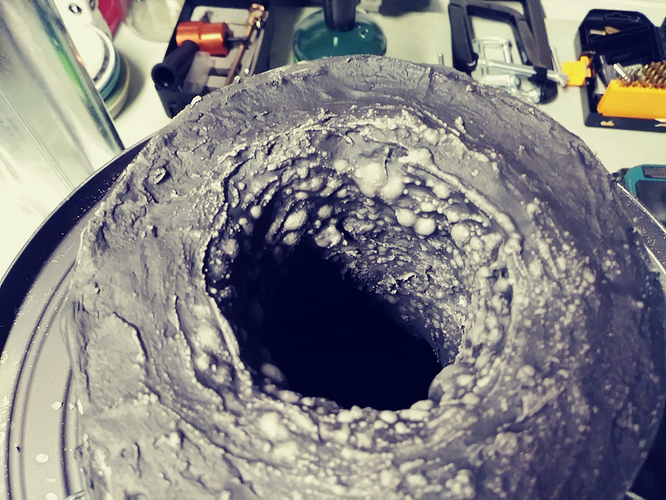 Amazing video JeffD.
My go-too favorite saw IS a Stihl MS260Pro.
Very, very light and powerful for it’s size. But honestly a bit handles/motor mounts fragile.
This guy is real good to get that saw this versatile useable.
I learned much watching this.
“learn some every day to keep upright out of the ground putting one foot in front of the other”
Steve Unruh

Jeff, thanks for sharing that YT video. Smart bloke! Refreshing delivery. I subscribed to his channel, and “rang the bell”.

I felt that it is a valuable video, worth sharing.

Just got in from making a lockable job site tool box for the mill. Not finished yet. 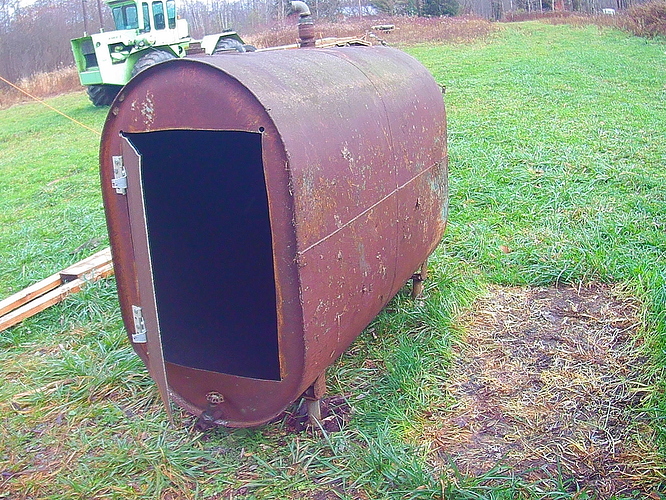 Use the tool trailer a lot but soon to be snowed in. The generator is about 25 years old and still runs like new, arm is nice for loading and unloading. 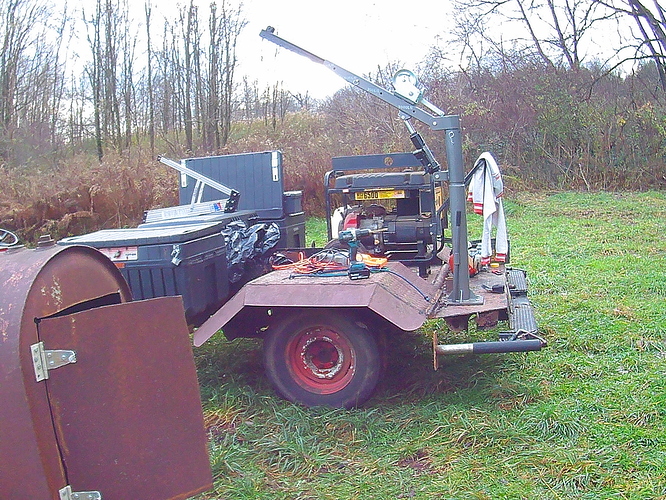 Hey Jeff,
I just stumbled upon the same video yesterday! Way cool and makes me want to give it a try. In fact, my son in law needs a 22 foot beam for the garage and I am going to try this method of milling one. Plan B is to use the saw mill but it is at my house 20 miles away. I’ll have to let you know how it goes.
Gary in PA

Ha! it must be contagious I ran out yesterday and gave it a try on a fallen cedar in my bog. Mixed results I need a new ripping chain.

My way of fixing a troubled gasoline carburetor: 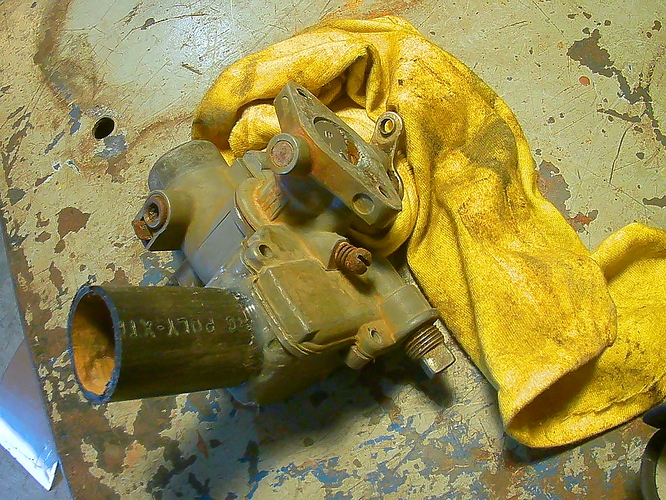 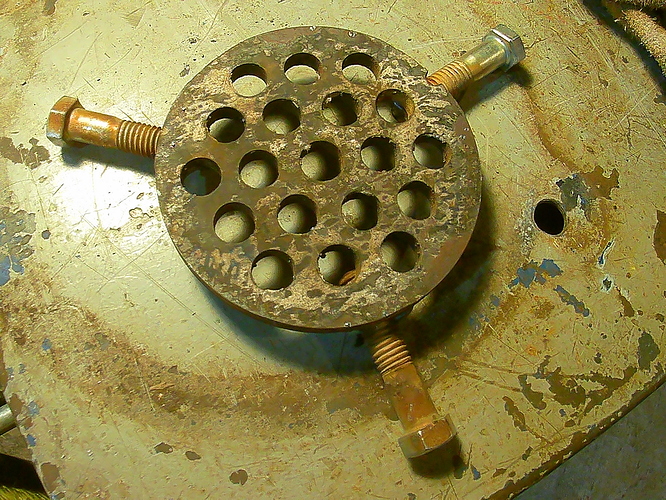 If it wasn’t raining, I’d be out in the woods trying that board cutting technique. Nice find.

More than one person use this method:

They all have nice long bars so the don’t have to bend over so far. TomC

Wow, that is impressive. I wonder how long it takes to learn that??