We been working so hard it’s not even funny… I am exhausted. 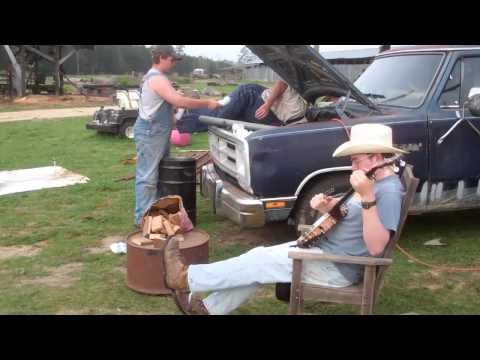 This looks like fun I wish I could work with Wayne!!

Hmmm, who’s getting the better part of this deal today?

Not to worry SteveG.
He will get his come’uptance once he starts daily woodgas operating and discovers why many of us say black denim pants, black caps and black T-shirts are the official recommended gasifier operators clothing. Can’t attract the girls always looking soot smudged and char stained. Even then he’s gonna have to find just the right woodburing country girl likes the smell of woodsmoke. Warm and homey and minds you of a kitchen woodstove, meat smoker, or campfire living.
Hmm. Come to think of it, seems the minstrels get forgiven for a lot.

Good times,
Chris, I think in you’re boots is a good place to be.
More than a couple folks wishin they were there.
All the best
TerryL

Very True SteveU
That is an excellent piece of Banjo playing Chris. What would the world be without good musicians.
Wish I was there too!

Ditto on the claw hammer banjo playing! Sad to hear that the 3 finger guru Mr. Earl Scruggs passed away yesterday.

Chris & Wayne, I got my schedule C done while the video was downloading with the phone modem … Fortunately Wayne only had to hang over the edge for a minute … My guess is he was dropping the fittings in another bucket under the hood. At least one hit the ground. I’m hoping you will get your two trucks to Indiana so you can race each other and I can just kick back and enjoy the event. I put new tires on my survey truck and changed the oil yesterday and I guess the noise from the old tire wasn’t the tire. Have to replace a wheel bearing now. Seems I never have time to play … Mike L

Lots of work around here but we have to have a break sometime. On Friday night we fired up the woodburner and headed out to Jacks’ for supper. We watched several folks walk by the truck and not one of them noticed that it was any different. The truck gives no sign of being wood powered. No smoke or smells. Another good day of progress! We have the heat exchanger done and have been working under the hood. Here’s a few of the highlights: Nice work all. The throttle body being added looks good. Couple of questions, What are all the extra holes in it going to get sealed with, silocone? Then also are you going to have two gas peddles. Keep up the good work, wish I were there. The banjo playing is good too. I could handle a camp fire and a couple hours of that.

The throttle body is sealed up fine, Wayne had used it previously on the 460 Ford. Yes there is a second gas pedal. I may eventually get a mechanism for switching the linkage on a single pedal, but for now we’ll keep it simple.

Sure looks like you guys are having fun! How many miles do you expect to go between refilling with wood? Sorry if this was answered before.

Wayne can go about 45-50 miles in the V10 without refilling. We’ll see how it does on this one.

We drove the V10 up in the woods a little, playing with the 4WD.

Wayne and Chris in the mountains. V10 woodburner surrounded by wood fuel. How many miles per # does this truck get? This is the ideal work vehicle !! How much more power does it have over the Ford?

It has quite a bit more power than the Ford. Not for sure on the horsepower but its enough that I can feel it. One of the advantages of the v10 is the multiport injection and the computer timing advance, seems to help the power some.

The mileage varies a lot depending on how I’m using the truck, I think when I was testing it over the road it was getting about 3/4 miles per pound.

Had a fellow come out to the farm that hails from Georgia. He farms on a large island down there on the coast. Seemed like a real nice fellow, wanting to build a truck he can use on his farm down there.

Wayne may be the best used Dodge sales person there is. Before I met Wayne and rode with him I would have never considered a V-10. Now I spend hours per week searching for one. I need a farm truck that will earn its keep around here. If I don’t find a V-10 I’ll have to take a Ford or Chevy.

Wayne the Woodburning “used Dodge salesman.” He might even get some kind of award.

Wayne tells me he never was a Dodge man, they just happen to make the only V8 in a small pickup (Dakotas). Then when he was looking for a big farm truck, the V10 Ram was about the biggest gas motor you could get in a pickup. There are V10 Fords as well, only 6.8L though compared to the Dodge 8.0L. There’s no replacement for displacement.