OK, third time I try to upload this reply hope it works this time.

My served waters (sewer) system for Chris. It works! Been useing it for the last 30 some years. This one is workig for 2 years now, sense it´s high density plastic, it must work for at least 50 or more years (I hope). The last stage is a digesting pond that is so healthy that it has frogs! …and from there it goes to a plantation of a type of potatoes we use to feed the pigs. It´s envioromental, an achievement. The gray waters from bath tub, shower and sink, go direct to the final pond AFTER the digestor systems, previous a grease trap.
I almost forgot: the first and second tanks, have a “breather tube” straight up with a mesh on top (to prevent insects to go in). This allows gases to come out and prevents over preasure.

This is it, I hope it’s useful for Chris and others. 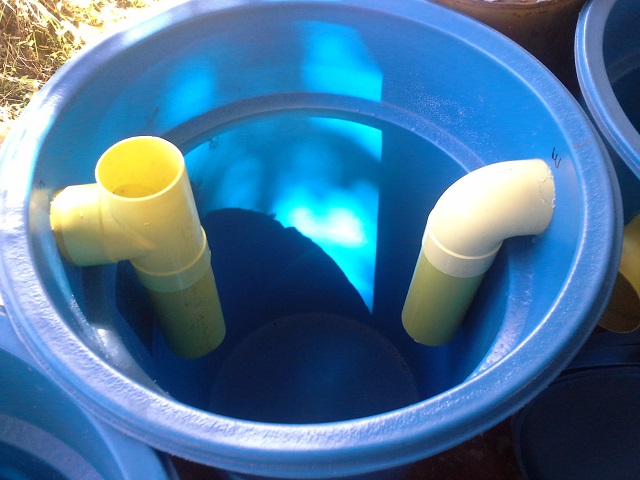 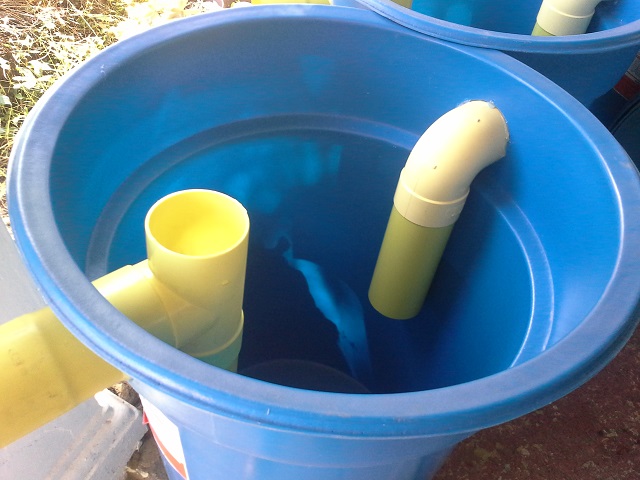 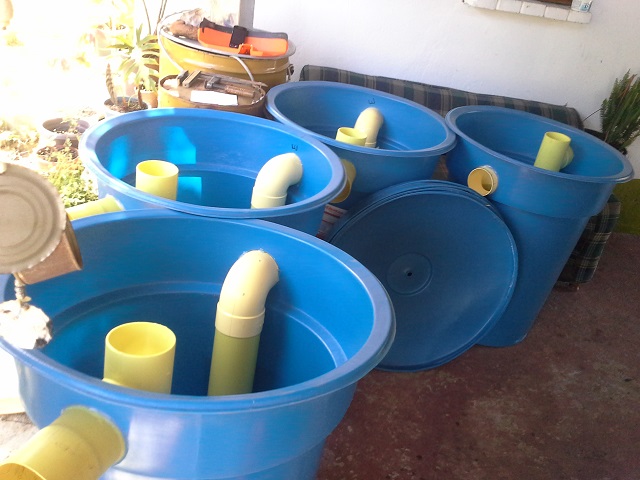 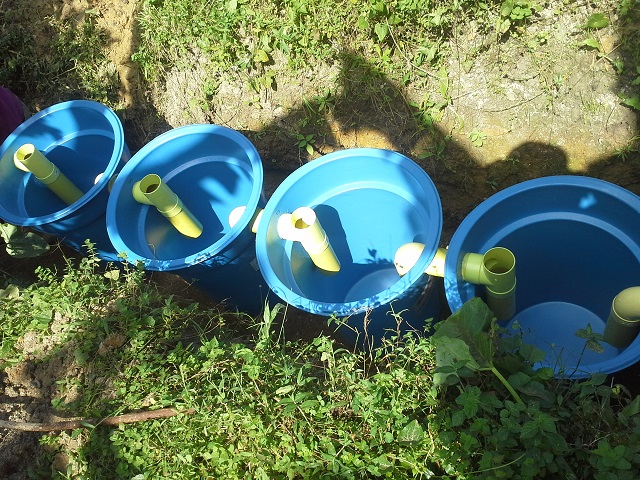 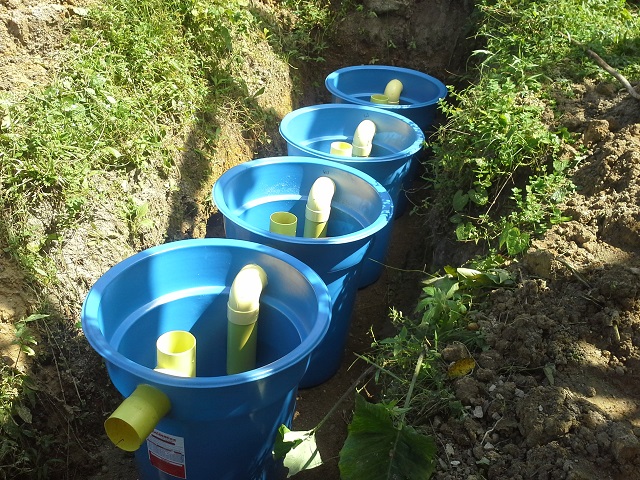 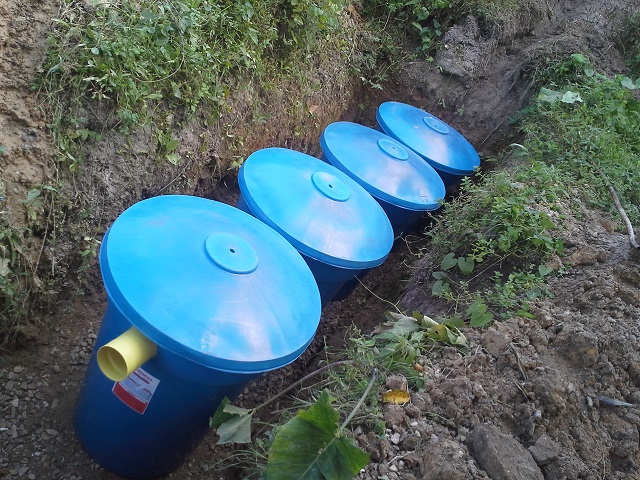 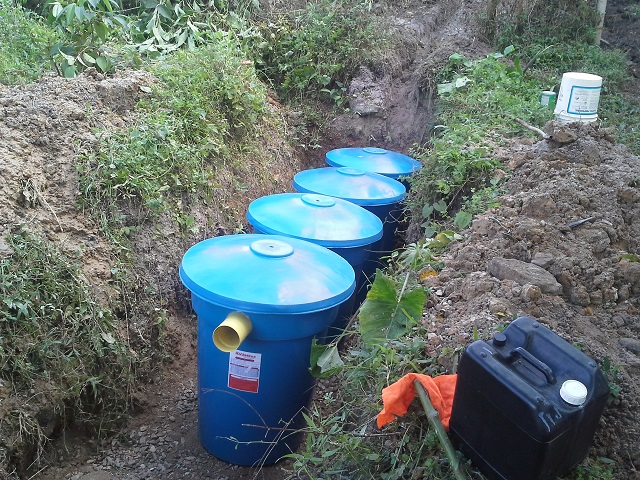 NOTICE; before the first tank is a Y conection with a cap. This is to “cure” the system with sodium bicarbonate (first day) and fresh cow manure diluded in water (second day). You repeat has needed. It works like rumiant´s stomach. 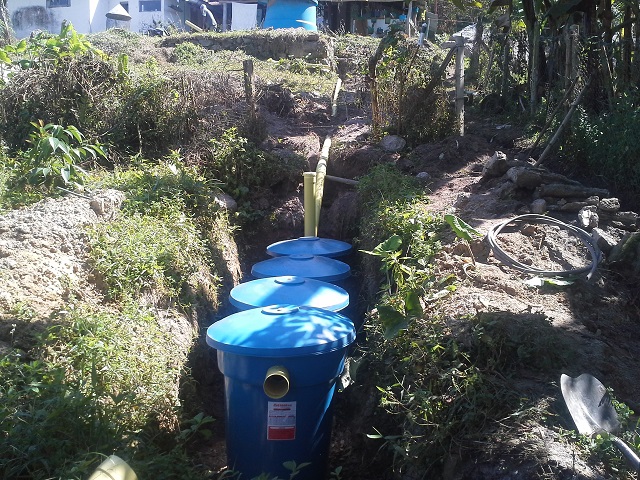 How do you deal with sediment accumulation?

Very interesting but I seriously doubt I could get it approved here and being on a main road i have to play by the rules. I suspect it is far healthier then what we can get approved.
When I was reading about permaculture designed gray water systems one of the tests of purity was to have ducks at the final pond if the water is still dirty and soapy the ducks will refuse to swim in it. I thought that was a great test.

Hi David,
sediments are mostly in the first tank, and almost nothing in the second one. For thoes sediments is what the cow manure is for, it digests almost anything. I only had to clean sediments in my other system once in about 18 years and it was another more traditional systems. This system is supose to serve for a family of 4, if it was of two (2) tanks; you add one (1) tank for every 4 members, so ours is good for a family of twelve (12). Sediments are, anyhow, easy to clean (1/2 a day labor) because these are 500 liter tanks and they are all or mostly in the first tank. I´ll try to take some pictures of the digesting pond and post them.

Interesting. It’s the same principal as my septic system. The pond is replaced with an engineered bed of sand and aggregate and perforated pipe. I’ve had my tank emptied twice in 10 years. It’s required every 5 for insurance purposes. Talking to the septage guys they say if you are not using bleach and trap the majority of greases you are good for a decade at least.

David the only thing you have to worry about with a system like your which is what I have it is code around here is the baffle breaking and stuff floating into the field. That is what happen to the system in the house I grew up in. The risk you run into is if you wait too long and solids float into the field you have to replace the field as it will plug. Strong cleaners are definitely a problem around here some towns will let you use a dry well for the gray water it is worth while to keep the washing machine soap out of the system that tends to be harsh stuff on the bacteria in the system.
I never thought of putting cow manure in to prime the system that is a great idea.

Cow manure to prime is a good idea. I don’t use chlorine bleach myself and stay away from the hardcore cleansers as well. I looked into a gray water system at first but my property is basically all swamp so I have 10 acres of grey water filtration!

Abner, I really like your system. Thanks for posting it. I’d appreciate more pics if there is more to it. Very good…

We are doing a training here tomorrow and wednesday. I have one of your fellow countrywomen here for the class. One of those old friends I posted about before. She came to learn more AT to help with the situation there. We continue to pray for your country…

Thanks Billy for your interest in this almost apocalptic situaton in our country. It´s apreciated

Venezuela has a piece of my heart. It was the first place I went out of my own country. At that point I had not even travelled much within my country. I was 16 the first time I went there. Kind of a wild place for a wild kid. It hurts me that the peoplel in charge have messed it up so badly.

Chris, everything looks great. At least, you know how much work you are in for.

messed it up so badly

For those of you who don’t know about the situation in Venezuela… Chaves’s daughter has a net worth of $4.3 billion and is the richest woman in Venezuela. The combination of the Maduro kids and the Chavez kids is costing the State $3.1 million a DAY. They have no money to pay the oil engineers.
They have no money to buy light crude to mix with their heavy crude. Now, there is very little they can sell.
It is a very sad state of affairs brought on by corruption.

Interesting. It’s the same principal as my septic system. The pond is replaced with an engineered bed of sand and aggregate and perforated pipe. I’ve had my tank emptied twice in 10 years. It’s required every 5 for insurance purposes. Talking to the septage guys they say if you are not using bleach and trap the majority of greases you are good for a decade at least.

I’m reviving this in case it helps someone. I was really looking for ozone well water treatment. I thought someone had mentioned using it once.

The ‘old guy’ that has since passed, said 20+ years. As long as it has a reddish purplish crust on it, the bacteria are doing a great job, don’t bother pumping it. (Of course he is there with the truck and we spent 4 hours find the tank lid and digging out the hole, and you already have to pay a service fee for him being there so the tank got pumped anyway.

If you are starting to have issues replenish the bacteria like Rid-X, and they also have some enzyme stuff that will help clean out the drainfield like Instant Power septic shock. (my mom gets carried away with bleach so we have to fix it every couple of years, I just add the drainfield cleaner as a preventative measure. For all I know, it has never seeped.)

Green Gobbler Bio Flow strips work good for drains that get clogged with hair and soap scum. Which of course contribute to toilet gurgling issues…

This is a great thread!

In 1977 my brother and I dug a pit for a back house at the Family cottage.
All these years later it has this unsettling habit of self empty.
The pit is on the high side of an island and several hundred feet from the water front…

Where does the poo go?
We don’t know but every spring its empty.
My theory is ground water movement and the spring run off carries the contents of the pit into the bed rock.
I imagine its very nasty someplace down there and its likely not good for the lake. 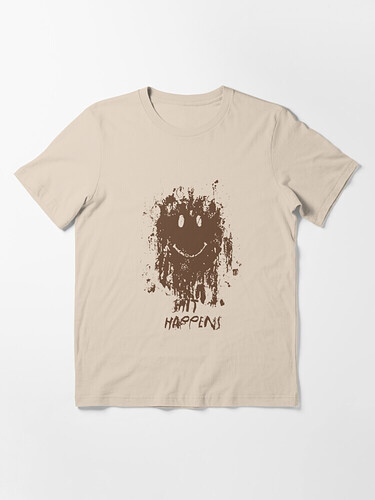 Where does the poo go?

Assuming you are using TP, you would most likely see some residue if it was just washing away.

I would like to guess bacteria are eating it up, and they produce heat to stay somewhat warm but it could be considered edible by much bigger animals from rabbits on up…

Since I wanted to make a smart-ass comment about contributing to the rampant black fly population, and couldn’t find any good crap to link.

I will leave you with the tiger worms. Happy Fishing.

Today we celebrate the humble toilet and draw attention to all those who don’t have one, so check out this latest, grossly awesome bathroom innovation.

Since I wanted to make a smart-ass comment about contributing to the rampant black fly population, and couldn’t find any good crap to link.

You get black flies until the heat comes on and at temperatures above 80 sustained for a while they die off with the mosquito.
But then comes the deer fly when the heat hatches them out and they look like a large housefly but with crazy evil eyes.

I can literally remember running to try and avoid the flies or diving in a lake to see if I could wait them out before coming up for air.
Hiding under sheets praying someone get out of the beds and sprays some DDT around inside the kill the buggers.
And the truly maddening deer fly that buzzes around and around your head watching and waiting to dive on you and lift out a chunk of flesh… 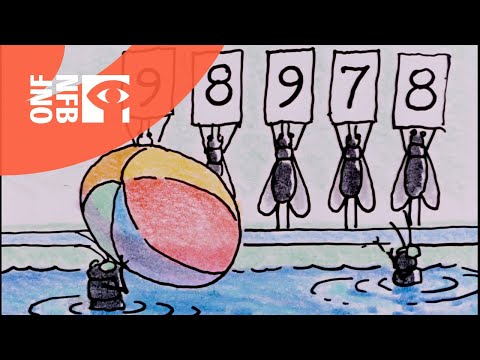 I can remember being in the bush west and north of Iron bridge.
The flies were so bad.
You were covered in rod grease and diesel oil at the end of the day and stunk to high heaven but you could not get naked and dip in the lake to wash the site off your body because the files would eat you alive.
14 days in camp and never washing anything than your hands your face and sometimes you back side.
The wife would make me strip in the hallway of our apartment when I got home

I can literally remember running to try and avoid the flies or diving in a lake to see if I could wait them out before coming up for air.

been there, done that. Let’s all play moose! Which works well only because, you are covered in armor made of icicles which the black flies can’t bite through.

Hiding under sheets praying someone get out of the beds and sprays some DDT around inside the kill the buggers.

I never had to do that, but we sprayed prior to bed, and duck taped anything that might appear to be a hole in the tent.

I think the poo washes into this slip…

I would bet on an animal. It is too easy of food source for a critter not to eat…

I never had to do that, but we sprayed prior to bed, and duck taped anything that might appear to be a hole in the tent.

Things you forget about when your grown up.
My Gran had this sprayer and she would walk around the cabin spraying down with what ever insecticide she had ( likely DDT, because we had a lot of stuff like that still on the shelves dating back to the 40s )

We had 12 volt lights so you could watch after the mist had dropped the flies would start to circle and fall.
This would last most of the night as long as the logs had been well chinked and there were no cracks for flies to get in.
OR someone would go outside use the back house of pee and let the flies in then the process of chemical warfare would begin again… 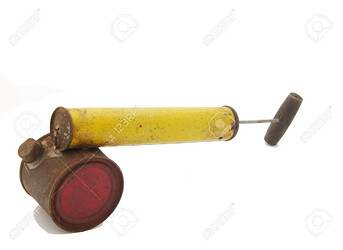