Hello, Mr. Cioni,
How about a carbon arc furnace and injecting plasma steam. Wihtout all that nitrogen in the mix, the energy of the fuel should be
5 times higher than woodgas; more than paying for the electrical energy needed. Should com out with H2, CH. CHO, CO.
What can w develop together??

Hello,
Personally I think that charcoal not must be destroyed but (for me) must be just the medium into the process. The idea of Gary of exhaust gas of engine must be developed for increase the efficency. The charcoal absorb high amount of CO2 and water steam. Need to find right heat source that must react with charcoal for produce CO and H2. Also catalyst is very important stage inside process because with methane you have high calorific amount of energy more than syngas. For my experience you can use nitrogen inside process, some scientists use that as medium for transport water molecules. Regards Marco.

Hello Marco,
You are right, the charcoal can not be destroyed. It can only be transformed into somthing that is usefull to you.
It is just carbon with a bit of contaminets. If you wish to make a fuel out of it, you have to add something that
will turn it into a burnable gas. Now you can reform it into a compressible gas, or into a liquid that you can store.
Or you can use it while you produce it.
The nitrogen that you suck in with a conventional gasifier, reduces the energy content by 40%.
But it is doable and well pruven.
While you are running your engine, divert a portion of your gasses to liquid for storage.
A small amount to start up your system. Then get on with powering your needs.
And keep thinking and experimenting, and improveing the art of energy production.
We need more people like you that has a dream and the desire to learn.

Hello Daucie Rose,
For build a gassifier efficient we need to understand better the chemistry of compounds that you put inside. For example using pellet the gasifier produce a lot of water vapour (unburnable) that normally is lost (absorbed by filter) and not usable inside the reaction. Processing just charcoal you need pure carbon but you need to add oxygen and water and high temperature. However for me the goal is not spent some energy for create heat necessary for process. Remember that also time is very important variable inside the gasifier process. From my test pirolisys start from 400-430°C but better temperature is 500°C. In the previous post you are asking about plasma, probably you have been realized that way is other for produce the high temperature on pirolisys zone. Regards Marco

From the my vision the nitrogen can be useful inside gasifier process creating CH3NH2 called methylamine, an burnable gas with fish smell. The balanced equation is 4 CO2 + 10 H2O + 2 N2 = 4 CH3NH2 + 9 O2. That is just an example but as you can see from equation the nitrogen have an important part. Depend what we want produce. Regards Marco

Marco, you have a mind that Works;
I like that…If you want to produce fuel gas;then you must create an evironment that Reformes the gasses into the things
that you want…If you want to run an engine then you donot want useless nitrogon. If you want ammonia then you want
lots off it . But if you want to fuel an engine, you need to refine the purrist fuel you can.
Woodgas is a proven fuel; It is well developed in Hitlers rule.
If you want to run your truck, then you must give up all the theory and" what ifs" That is best done in your worksop.
When you have a real improvement then we will flock to your door.
But as chris sanens told me " If you say it, Best you can Pruve it"
I certanlly hope that you have a new improvement.
And evryone on this forum is ready and willing to help yo and support you in quest.

As Leonardo da Vinci said… the experience is the mother of all certainty… and I continue… but we need an good theory first!
I’m sure that is possible optimized and compacted the gasifier/reactor and obtain in output just methane or methalymine or nitromethane but in all case we need to use all initial energy applied. The law of conservation of energy is clear… the energy cannot be created or destroyed, but it can be transferred or transformed from one form to another (including transformation into or from mass, as matter). The total amount of energy in a closed system never changes.
In the case of an engine more of 70% is transformed in heat and lost but for our gasifier heat is the energy that we need.

while you probably won’t get all of it to, some water vapour is converted to H (or is it HH or H2) in the reaction process.

methane, methalymine, nitromethane… compared to the wood gas we are already producing… not sure how to ask this this properly… but how much more flamable would those be?

Making a good gasifier that is consistent is tough enough, will the expended energy be worth the effort… just asking as it all matters.

I can prove simply that catalyst used inside gasifier reactor at 400°C produce just CO2 and H2O (supersteam) in output and not burnable gas. Catalyst is very important (outside of reactor) for obtain complete reaction of CO/H2 gas. Is my opinion that syngas is just the starting gas after with right reaction/catalyst for amplify energy of mixture and for security of life, don’t forget that syngas is also an poison gas.

I’m sure you are correct that at 400 C you don’t make burnable gas. I am also sure that our small gasser operates at much higher temperatures in the reaction area than that and does make burnable gas. Yes syn gas is not good for you… are you saying methane, methalymine, nitromethane will be any better (read not dangerous to breath)?

I’m not saying developing other systems is a bad thing… I’m all for it even… I am just saying at some point where do you draw the line and say holy cow this is too much for the average joe? If it’s easier cool… let me know and i’ll try it.

for it to make sense it has to be able to be duplicated… Mr Keith’s system has proven that is more than possible.

Hello,
I can also create burnable gas at 400°C but… without use the catalyst inside reactor but need some time with standard heating systems… The point is that the energy and time needed for reach high temperature process inside reactor is enough. Need to find other better energy source for create pirolisys in fast time. Regards Marco

I can have our little system up and running in 5 minutes… how much faster are you talking about? 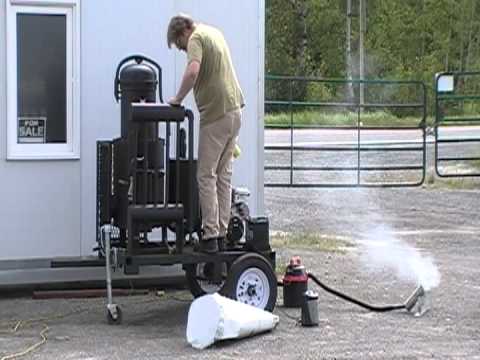 Would like to hear more about nitro methane production.

Nitromethane is CH3NO2 for obtain that you need also compression and ionizer for nitrogen (also oxygen) … you can use compression of engine and create inside cylinder the explosive mixture… create and burn at the same time. The balanced equation is 3H2 + 2NO + 2CO = 2CH3NO2 as result of combustion you have 4 CH3NO2 + 3 O2 = 4 CO2 + 6 H2O + 2 N2

what source of heat would you be using to get pyrolization that quickly? is that a word? lol…

I am not a chemist & you can loose me with the formulas. However, i am very familiar with nitro as a liquid fuel most commonly utilized in top fuel drag racing.
Nitro is the most potent engine fuel on the planet. 10,000 hp from a 500 ci Hemi on a 95% mix (5% methanol) is commonplace. At this level, the engines are rebuilt after each 4 seconds of racing time.

If even a very small amount of nitro could be produced during the wood gas process, hp issues with wood gas vehicles would all but disappear. Very exciting thought, but is it possible? If so, count me in!!!

Here is a gasifier for clean syngas