Anyone made some and tried them out? Been reading about charcoal - sweet fuel! Plus just about anything can go in the retort and everything comes out as a more or less the same homogeneous fuel no matter what it used to be.

If you pelletized charcoal up to the density of a wood pellet, wouldn’t that be the holy grail of wood gas road fuel? Big range, good power, clean burn, simple gasifier unit, easy light up probably easier to operate a charcoal unit too?

What would be easier is to simply use a wood pellet gasifier and mix fuels together to keep enough carbon for reduction. Then have no losses from making the charcoal.

Is there a way around the problem of pellets absorbing moisture when shut down?

Yes burn them down to the top of the hearth or near. You should never leave fuel in any gasifier at shut down.

Sounds good for stationary use but might be hard for driving. Would have to load just enough to get you there then wait for gas on startup to go home.

Check out the videos Wayne has for starting up his truck cold. Unless you leave for cover open in the rain I don’t think you can get enough moisture into a daily driver to make any difference. I seem to remember a video where Wayne drained the water out of the 5 gallon pail of wood to “dry it out” before putting it into his gasificer.

I think if you were using pelletized charcoal, you wouldn’t have a moisture absorption problem. Just going on the fact that char itself doesn’t absorb moisture, I could be wrong about that being still the case with pelletized charcoal.

I think King was making reference to the fact that wood pellets that absorb moisture disintegrate shortly thereafter. You’d end up with a big heap of damp sawdust in there if condensed moisture got on the wood pellets after shutdown.

True about Wayne’s start-ups but he isn’t running his gasifirer out of fuel each time he stops.

What about running something like Garry Gilmore has with the secondary hopper to feed into his charcoal gasificer? That system seems pretty robust and simple in his video. He even runs sawdust into it in one video.

Yes this is a different animal and he isnt using pellets as a fuel which was in question. I only stated any “gasifier” as a rule of thumb. If you do this it only prevents any issues and makes life easier. However, on any non pellet machine, you can certainly leave fuel in them without too much issue. I hope that clears things up, but if you burn down all the way you simply wont have that accumulation of moisture from your Previous shutdown. Pellets if they absorb moisture they will break apart, not to big an issue as long as there is not a whole lot in the hopper in this condition. A full hopper of this mess…then yeah you might want to dig that out and put in fresh fuel.

I have thod about this too last year (topic makeing charcoal pellets l think), and still do.
I tested some hand pressed charcoal pellets in a gasifier, the biggest problem was under high air velocity the gas stream ripped the dust/sparks from the surface of the pellets resaulting lots of dust to end up in the filter.
With higher density comes lesser reactivity-worse gas.

About useing wood pellets in a gasifier…

Emptying a gasifier at shutdown isnt nessesery. I burn them sometimes in my gasifier. Newer swolen or fell apart.
The trick (l didnt realy plan for) is l have a hot hopper. At cooldowns the wood is actualy still drying under 100c+ fo ra couple of hours, and only soaks in a litle of water, the rest ends up in my cooling rail.

I wondered if it would a charbed would need to rebuilt on each startup. If a small amount fuel can be left in without a problem then there probability is no trouble especially if an auger feed like you use for longer runs was used so the hopper didn’t need to be to full.

No you should never need to rebuild your char bed unless you completely burn it out.

On Auger feed systems, the level sensor is designed and set so the primary hopper is always a 1/3 full. This adds stability to the machine as the energy taken for drying process is held linear as possible. On these machines the chips are typically very dry and we dont get a lot of moisture.

If your lid is not air tight and you have leaks this also affects things at shut down. The more air tight it is the faster it shuts down preventing this moisture to develop.

Hi Strawman, I’ll throw my 2 cents worth in here. Making pellets from charcoal will require a binder. The lignin that holds wood pellets together is destroyed in making charcoal. This binder may be a source of tar. Also the charcoal pellets have lost much of the porous surface area that is needed to reduce CO2 into CO. And then there is the shear amount of energy needed to make a pellet. I’d prefer to just use hardwood charcoal ground to engine fuel size. Charcoal gasifiers can also be shut down when full with little worry about moisture because the charcoal is mostly devoid of water and hydrogen. Wood gasifiers use a fuel that generally has a moisture content of 20% or so AND molecular bound hydrogen that can be freed up as the gasifier cools down. This can then add more moisture. Hence the need to heed Matts suggestion to run the wood fuel down to the char bed before shutting down.
2 cents in PA
Gary

i second that … been there , done that… The binder and moister used are a mess in the gasifier…

Strawman, second best choice, after a GG Simple fire with fuel grade charcoal, would be a pellet gasifier similar as Matt builds and Victoria ?

. This can then add more moisture. Hence the need to heed Matts suggestion to run the wood fuel down to the char bed before shutting down.

I think different gasifier designs might do different things.

If I run my gasifier all the way down to the char bed and shut it down the heat will radiate from the gasifier 2-3 hours and I notice at next start up I will have collected very little to no condensate . ( the heat in the gasifier has gone to waste )

If I have a quantity of wood left in the gasifier at shut down it will radiate heat also for 2-3 hours and at next start up I will have collected condensation . Maybe up to a half gallon . The start up will be just as fast as the above . The only burden lighting with this quantity of wood is getting the fire down to the char bed. In this case I feel the heat left after shut down did not go to waste but aided in drying the fuel. ( note . the the very top layer of wood will be moist)

I took the below pictures yesterday as I was firing up . I think the hopper is 1/2 to 2/3 full. Very fast start up and plenty of power:relaxed: 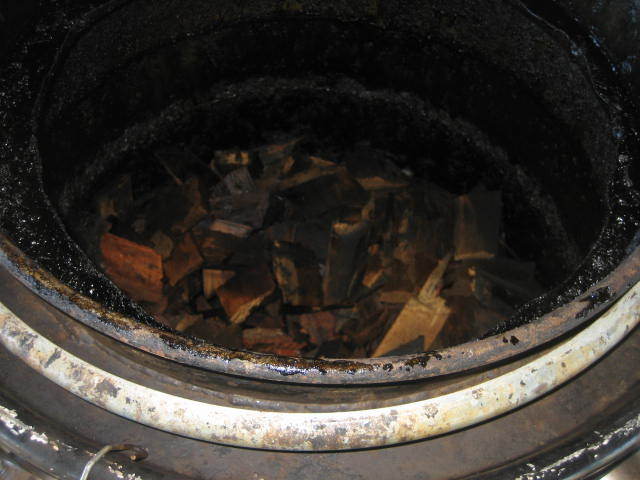 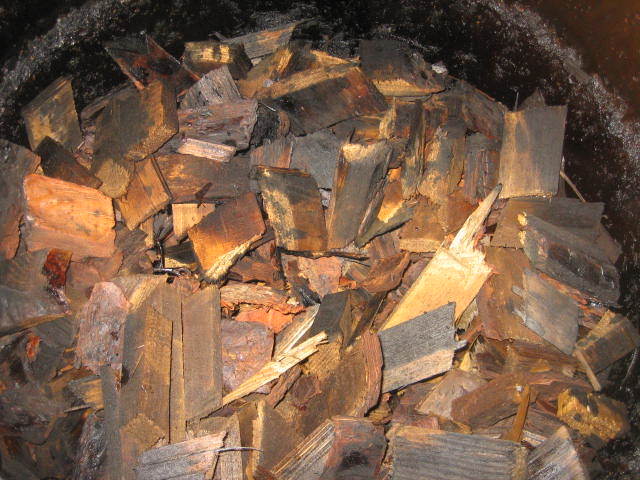 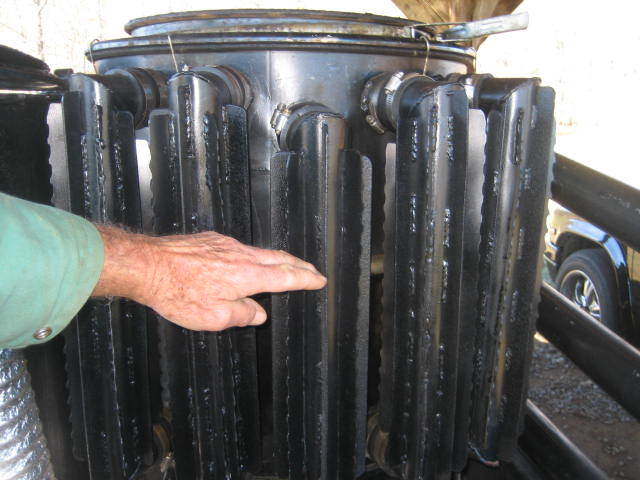 Excellent points and I’ve now learned some new things about charcoal :). Thanks for your input, sounds like pelleting is not worth the effort - creates new drawbacks and little benefit.

I’d probably just go the charcoal route at this point. I’m just curious with this post, my actual plan is to gasify straw, but charcoal is interesting and I can see a couple great applications for charcoal gasification around my place, like my small track loader and lawn tractor. Some time down the road a small, easy to light clean burning gasification system might be pretty handy on just about anything that would not be consuming 100lbs of fuel at a time.

One nice thing about charcoal (and wood) is that it will store for long periods of time without degrading as long as it stays dry, unlike liquid fuels.