This question relates to using an updraft charcoal gasifier for running a 2-4kw stationary generator.

I was curious if anyone has had any tar issues with their updraft charcoal gasifiers?

I am considering the use of a wet scrubber to help with tar (assuming a charcoal batch isn’t made well), however, I am not sure if it is worth the hassle, cost, time, etc, when I can replace the cheap generator engine for about $200…the scrubber setup would cost me more than this.

Appreciate if anyone can share any advice as it relates to their updraft charcoal gasifier run times and potential tar issues, if any.

One way to determine if your charcoal is good quality is if it sounds like pottery or glass, a sort of clinking sound.

Have you already built a gasifier?

@d100f has a lot of experience running gensets with his gasifier

I was curious if anyone has had any tar issues with their updraft charcoal gasifiers?

Not if your charcoal is well made

Build an ammo box saw dust filter. Just a port in one side and a port out the other. Pack it with saw dust. You can put a scrub pad on the exhaust side to keep the dust from getting sucked out. These filter breath very well and do an excellent job filtering the gas. You will have better results with this than a water bubbler and it is much simpler to build. You can get pipe flanges that surface mount to the ammo boxes and they just bolt on with some sealant to seal them.

Here is one that I built.

Funny, l just discussed this over the phone today.

The answer, as with most woodgas related things, is “it depends”.

If you only light up a genset once in a while, and make only a few gallons of charcoal a year, being of good quality, hand pick out any brand, then a updraft is a safe option.

However, when you get serious about it, and begin to rely on vast amounts of charcoal, things get tricky. If you want to process a reasonable amount of charcoal, sooner or later you will get a hidden passinger, a peace of wood, or a twig, or a badly charred peace of wood… and when it heats up, it will dump ALL its tar in the gas. Wich usualy dont, but may cause problems.

Passing the gas trugh a tight felt filter is about the only thing l have seen to sucseed at catching tar (and an electrofilter but thats on a nother level). But once it does, thd filter is trash. Still better to replace a sock thain a engine… l have tarred my filter twice on my Mercedes. But the engine never got a drop.

Downdrafts are, if you ask me, simpler. Not the building part, but every other part.

Hello Chris , welcome along As been said its really down to your feed stock if you didn’t cook it correctly and allowed a lot of brands to get through , although if you are crushing the charcoal down in size i cant see that happening unless you have a machine that’s doing it that will cut through the brand or crush it , on my machine anything harder than normally cooked char jam the machine and will slip the belt on my crusher and so i know to look , ( happened 3 times in 6 years ) . well no ones perfect said the Dalek climbing off the dustbin .

As long as you have a good filter you should not have any problems at all . Matts filter is well tested and compact dont need to over complicate a simple system with scrubbers and the likes .

Love to see what you have built if you get the chance,
all the best
Dave

As Dave said. I break my char down to fuel size with a hand crank crusher. Half inch to quarter inch fuel. Anything that is not fully charred will hang up and gets pulled out. Size of the hopper determines run time. Generally the only thing you need to monitor is how close your supply gets to your nozzle or nozzles. You want to maintain a fair amount of fuel above them which you will measure with an IR thermometer. Simple filter as Matt describe and you should be trouble free. Gas temp coming out of my hopper on my larger unit never gets much above 110F. I have a cyclone on it. Not necessary. Doesn’t get much simpler than that.

Thanks everyone for the prompt replies here. Much appreciated.

I haven’t built a gasifier yet, currently in the planning/research phase at the moment. This forum has been very helpful. It sounds like making high quality charcoal with a simple filter (sawdust or fine felt filter) is the simpler way to go. Thanks for sharing. My original thoughts on the scrubber was per a few articles I read on the successes related to venturi scrubbing wood gas. Here is a link to one as FYI:

Downdraft seems like a great option long-term, but thought I would start with the updraft version first to get started in gasification. The downdraft versions seem to have more design opportunities in the sense of air preheating/cooling syngas, hearth dimensional/nozzle details, shaker grates, etc.

I am building a charcoal retort now to better understand the quality of charcoal I can produce.

Personally, wet scrubbing the gas isn’t worth the effort. The sawdust filter Matt referenced will handle anything a charcoal gasifier will spit out. Same for the filter that Kristijan talked about. On my Mazda B2000 I ran an updraft with an upholstery bag filter with no issues. I used a 55 gallon drum for the gasifier body and I would get about 60/70 miles before the gas started to get a little hot.

With an updraft make sure your charcoal stays as dry as possible, sealed bags and containers for storage. Also add water drip at the nozzle area. I’ll take some photos of what remains of my Mazda’s gasifier(I was hit by a stolen car and it crushed the barrel). Stay tuned I’ll edit them into this post.

Here’s the gasifier, I had 5 1/2" holes in a very thick walled 2.625" DOM tube, wall thickness was 5/8" for the heat. I think I could have gotten away with just using 3 of those holes, the sides got pretty hot closest to the outer holes.

I kept both ends open for an even flow of air.

For water drip I had a 5 gallon square tank with a rubber hose and a valve, and on the end of the hose was about a foot long piece of stainless steel drinking straw. I set it to 1 drip per second. 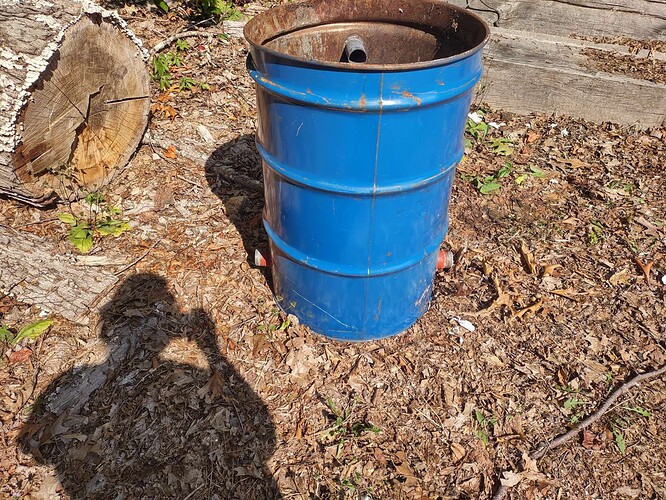 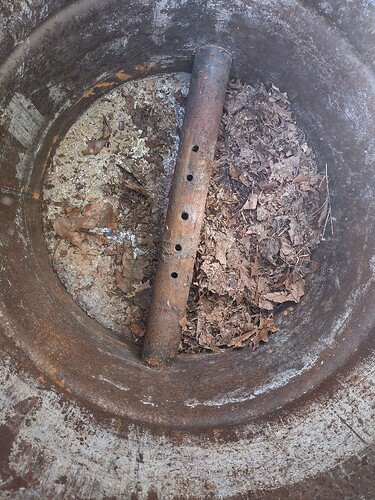 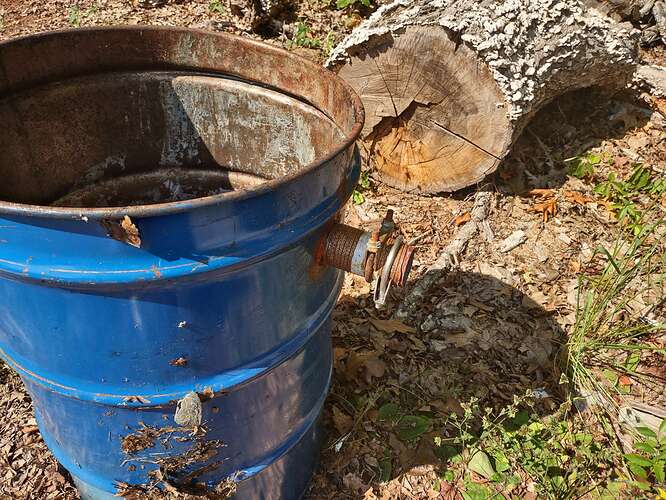 And my gas exit was that pipe at the top. I had a rolled up tube up diamond expanded sheet metal to keep the biggest pieces from getting sucked into the filter box. I used about 6 feet of flexible exhaust pipe to route to the filter.

Here’s my filter, a tall ammo can with two pipes. Dirty gas entered at the bottom pipe, and would get caught by the outside of the bag. I did it this way so excess soot could fall off of the bag to prevent too much clogging. The bag is just hose clamped to the pipe coming out of the lid. 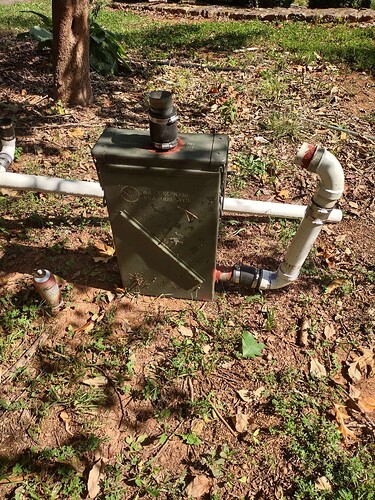 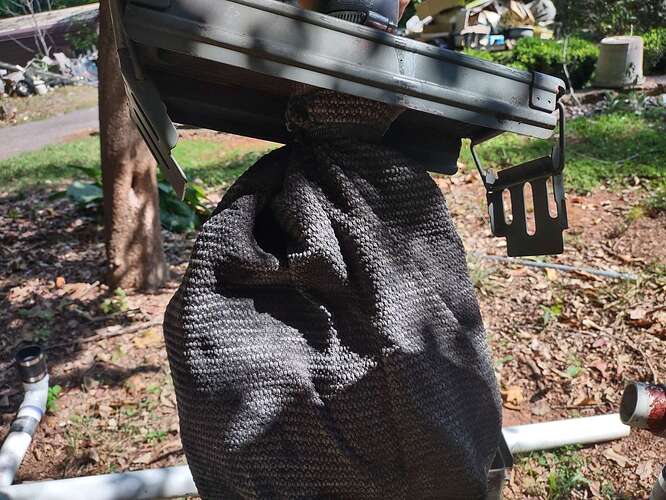 Inside the bag I did put in some heavy door screen, steel not aluminum, that’s mostly there to keep the bag held open, and act as an emergency last stand filter if the bag gets any holes or tears that I haven’t noticed.

I was able to go country highway speeds, 55mph, no problem. Top speed I managed to get to was 60mph but I didn’t have an opportunity to go faster than that. That poor engine only has 80 horsepower when it was new, so acceleration was like a VW Beetle when it was running on charcoal gas.

The gasifier that I built is by no means the best or easiest or something I came up with. The flute nozzle design is something Kristijan discovered with his Mercedes.

Thanks for sharing - really appreciate it. I particularly like how you designed it to allow air to flow in from both sides of the nozzle. Yeah it seems the scrubbing option may prove to be more hassle than its worth at this point for me.

Thanks everyone for helping me learn from your experiences here.

The way I see the wet scrubbing, is it’s more maintenance. You have to have water or oil, and change it out, ensure the water level is correct, and find a way to dispose of the sludge. Great if you have acidic soil and need to balance the PH, not great if you have basic soil.

Sawdust is a good way to utilize byproduct, a bag filter you just have to wash every now and then or shake it clean.