I know we are going though a time of cheap oil, but what is the cause, I know we are “fraking” in North Dakota, is that what’s driving prices down?
Maybe it’s because there are so many Woodgas vehicles on the road now!!!
Happy Thanksgiving Day everyone!!! Herb

Have a fine Thanksgiving yourself.

In my area I think low grade wood is going for about 16 bucks a ton .

still 1.029 / L up here, that’s 4.00 canadian for a US gallon. I hear the middle east is talking oil going down to 20.00 a barrel… don’t see it doing much at the pumps here… and canada being an oil exporting nation you’d think gas would be cheap… yeah, cheap…

Wow that is expensive, there’s so much I don’t understand about oil prices! Isn’t Canada wanting to sell oil to the US? I think that’s what the Balcan pipeline is all about! Now why would Canada want to sell to US when prices are so low? Can’t believe anything we hear on the news, one time they will say US is producing so much we are now exporters, next time it’s something else! I know Fraking is really making the economy go crazy in the Dakotas, at least it was!

HI arvid sorry too here about the gas prices,hard too tell whats next these days.Our cheap gas may be too the election time closeing in,and of coarse sauty Arabia pumping extra oil too stamp out natural gas fracking,or the one world order agenda.Keep the faith,and happy thanks giveing dinner, hopefully brighter days are ahead.

The U.S. Government gives massive amounts of cash “subsidies” to our oil companies to make the price at the pump “seem cheaper”. Same to big agro corn/wheat/soy/oilseed farmers.

We’re paying for some of the gas before it even reaches the pumps through taxes, which could/should be going towards schools/EMS/etc. instead of making ridiculously wealthy oil companies more money.

I could have sworn I heard that the US just sold China 2 tankers of oil… wonder what price per barrel it went for. It’s all bs anyway, it’s not like there really is or ever has been a shortage… it’s all about make a few as much money as possible.

I heard china was on flying missions over sierra to help russia,hope that starts working out for the people of sierra,and not the Communist armys.

And Happy Thanks Giveing Herb Hartman

Gas prices always seem to go down in the winter months. Maybe it is because of a election year. But I know the prices will go up again higher than before. it has never failed yet in my 63 years here on plant earth. And yes I was born here in the good old USA, Washington State. Sorry to say but gas prices and availability seem to be affected by Wars. I’m going to build me a gasifier with wheels.
Keep on Gasifiing, Bob

Well the way I understand it, the Arab oil cartel lowered prices to try to make drilling in the US unfeasible. To make profit here I think I read oil needs to be at lest $50 per barrel.

Saudi Arabia produces oil for $ 15 a bbl but, they need $ 105 to balance their economy. They tried to smash the tigh-oil producers by lowering prices. This backfired on them because everybody raised their volume to compensate for lost margin. Nobody will cut back on pumping. The result;
In a recent report, the International Energy Agency highlighted the fact
that global inventories of all petroleum products were at 3 billion
barrels, which was a record. And just over 2 billion of those barrels
are resident here in the U.S.
Land-based tanks are full and super tankers are stacked up full in the major ports. When oil prices fell, California raised the gas tax because people were accustumed to $ 4.00 gas. The Saudis got their wish and both fracking and tar sands are crashing.
There were about $ 3.3 trillion in energy-based hedges and derivatives. The fracking industry was financed by the high-yield ( junk bond ) market. This is all defaulting and energy companies are going bankrupt. The FED was printing about $ 1 trillion a month to rescue these crashing derivatives. Obviously, they don’t report that they are rescuing insolvent banks who made stupid bets on energy prices. Globalization has brought us a single price for crude oil. This price is far below what most producers need. 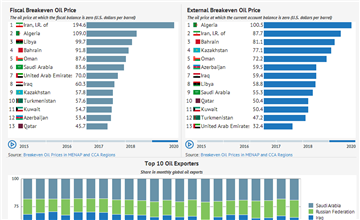 (Oct 2018) Global oil prices have fallen by more than 30 percent since the summer of 2014, affecting oil producers and consumers alike. This dashboard presents oil price dynamics and the breakeven oil prices—minimum oil price to cover...

American and Canadian producers can’t compete in the world market and are going bankrupt. 3 dozen companies have gone bankrupt this year. http://www.wsj.com/articles/across-the-oil-patch-firms-are-going-bust-1447985458
The junk bond market is dying and there is no financing available for the oil industry. Coal is dying. Solar is near / above parity in many countries. Natural gas is very low but, surviving. Since electricty producers make their highest profits at peak-load hours, solar is killing their most profitable sector.
Domestic oil is crashing and the only true insurance is wood gas.

That sound like to me a war on who is going to win with the biggest supply of oil to the USA at the lowest price and put the others out of business. Then bring them to there knees by rising the price back up. You know the gas tax will not be removed. On a brighter note. Happy Thanksgiving to everyone one on DOW. God Bless You All.

I don’t post a lot these days, but thought i’d weigh in here with a different perspective.

Retailers are not expecting a bumper take from this year’s holiday season. Wal-Mart of all places recently reported below expected earnings, and those were same store sales based. Fact is, when a place like Wally World is having trouble there is serious danger on the horizon. What do most people shop for at Wal Mart? - The essentials, basic boxed foodstuffs, detergents, TP, etc,…most don’t go there for a high end tv (they don’t have high end anything at Wal-Mart).

My take on this: If people can’t afford the basic necessities, at the retailer that sells them for the lowest price (and their earnings prove this) how are they going to spend money at Christmas? The simple answer is that they can’t, because they don’t have it. I suspect that commodities traders were tasked with lowering gas prices this year (artificially) so that consumers would feel less stressed and open their wallets for holiday shopping which begins in earnest at Thanksgiving. Consumers feel gas prices more keenly than any other cost, when gas is cheap they have that extra cash in their pocket and will spend it much more willingly. It also tends to have a psychological effect (optimism for the way things are heading) which makes those who have credit available more willing to utilize it.

For me personally, it was a rainy Thanksgiving, and I had a VERY heavy enclosed trailer to return this holiday season. I filled up the wood monster with Cash-O-lean and did about 80 down the freeway with her. Only cost me $48 to fill her up at $1.61/gal,…it used to cost about $140. I opted to stay clean and dry and hauled ass to the in-laws on this (temporarily) discounted fuel. For anyone wondering, I have pulled this trailer on wood many times, it’s an old girl and it pulls like a tank. On wood, my top speed towing her is about 45, which is OK for local 2-lanes but not so for holiday freeway driving, on gas 80mph is a breeze. It ALMOST makes me miss that added power, but I am one cheap bastard…

Wood is good, don’t fall for the temporary lull in fuel prices, and keep your eyes OPEN, there IS trouble on the horizon. I hope everyone had a wonderful and safe thanksgiving, enjoy the leftovers!

Hi Henry,
I’m generally an optimist, but I have a feeling something’s up. On the lighter side, I ran into a term I haven’t before and it cracked me up, Cash-O-Lean. Thanks for the laugh. Real good thought provoking commentary.
Pepe

I think Cash-O-Lean should be added to the DOW dictionary. 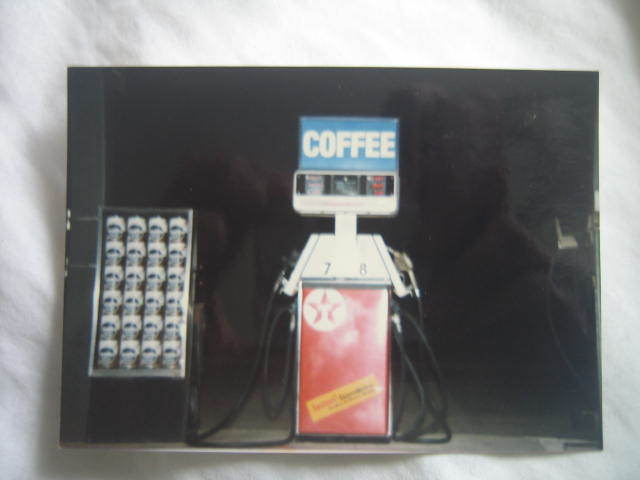 I can’t take credit for it, I think is was Al Denniger I heard it from, no idea where it originated.

I’d like to be wrong, we need things to be optimistic and excited about - I just don’t see the wondrous recovery everyone is talking about in the media, not on main street anyway. I had to get some essentials this morning (payday) so I hit the local Wal-Mart in Charlotte, MI, a small community where it’s the only game in town. If people were Black Friday shopping, it’s where they would be, and it was a ghost town. I took these two photos at about 9:45 this morning. Notice the wood burner in the first photo 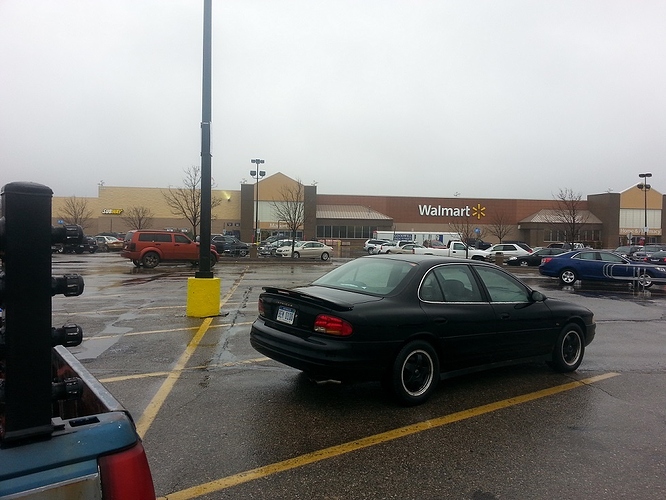 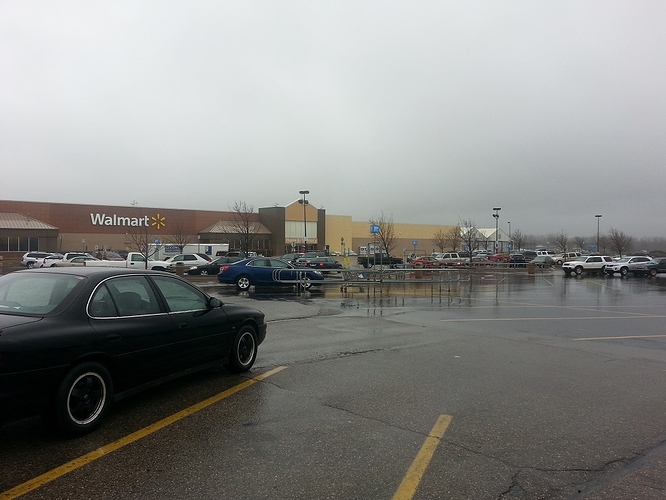 so I hit the local Wal-Mart in Charlotte, MI, a small community where it’s the only game in town. If people were Black Friday shopping, it’s where they would be, and it was a ghost town.

Wow, I wish Erie was like that. I stopped shopping in the big town, too crowded and too far to walk in those big stores. If I can’t get it in Union City, hardware store, NAPA, grocery store, I’ll get it online. Turns out that I have more time and money now. Vary rare will I go to the big stores now.

A nice quick overview with video, from cnn to provide context.

Another view on the oil price, from wnd. I personally agree with this take.

William is correct that we have a major glut. Down here in Houston, they have been building huge new tanks by the docks to hold more oil.

The pay off is for the large oil companies that are buying up all the independent contractors and wild cats that popped up during the boom. This is a political move that also allows the big boys who have large bank accounts to consolidate the field.

They don’t care if this starts another war as the price will just go back up then. The rich will have more oil, influence, and resources either way.

Thanks everyone, lots of interesting commentary! I tried to find info on how things are going on the Fracking front currently but reports I found are old, I know it costs more but it’s right here in the US, low shipping costs, they are also using this new Technology in Ohio maybe other places! I’m sorry to you guys outside the US, sometimes I forget we have a worldwide forum here! Are other countries using fracking Technology?