Chris; I think you have made a good decision — run what you brung.
IF in the future you find the bearing does wear out, I have s suggesting you can keep in mind— you know, as a last resort. Go back to 3;18 into your video. With an arc welder, use big rod and set the heat up a little hotter than you would normally run that rod at, and weld a bead all the way around the bearing. Put the weld in the groove between the inner race and the bearing cage. Welding around this area should make the inner race which slides onto the shaft red hot and expand. Thus allowing the shaft to be pressed out. To do this I would set the unit up in you 20T press before you start. With be bearing red hot it should push out, if it is meant to come out.
From what I can see, the outer bearing race must be inside of a plate that bolts on over the shaft. These can be very hard to remove. You’ll probably think you can go through the hole in the center of the plate and tap on the side of the race with a punch. Doesn’t usually happen. What you need to do is, with that good old arc welder, weld a snakey line all the way around where the rollers set on the race. That when it cools will shrink the outside race. More likely than not the race will fall right out.TomC

Cleaned the sludge out of the gearbox. Now I have to clean all my tools and the driveway… nasty nasty stuff. 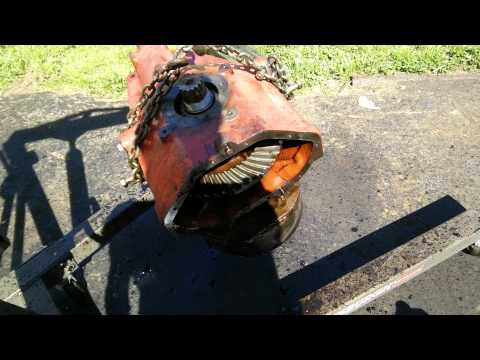 With everything clean and shiny, I painted the housing and flywheel Rustoleum “Safety Red”. It’s about the brightest red I ever saw. Anyway it looks much better and hopefully won’t rust. And chunked a little branch wood, just to break it in. Ran good! It’s smelly because of the sulfur, which is there to protect the gears I think.

Actually I’m pretty sure this wasn’t gear oil. My best guess is somebody used old crankcase oil from a big truck, many many years ago. Otherwise I can’t explain the black oil, because there’s no carbon buildup in a gearbox. Once you thin this stuff out with gas, it acts pretty much like motor oil.

Hey Chris, glad to see you using Lucus , I been using it in everything I 've owned for over 20 yrs. Never had a gearbox, engine, or trans. fail

Chris
Do you plan on using the branch wood as fuel?
Just trying to get an idea on different sizes and shapes that can be used,bridging issues and the like.

Yes, the branches work well. I burn whatever I can get my hands on. This came off a dead tree and is already dry. I’ve already burned about half of that pile today.

That looks great Chris, maybe a good coat of paint was all it needed.

was fun checking out your machine on Friday … Mike

Hi chris i seen your pic of inside the gear box, just woundered how many sets of gears are in those,You make that chunker any nicer some one will be trying too buy it,nice compact heavy duty unit, THANKS FOR POSTING THE BUILD,

Hi Kevin, not sure on the exact size. It’s an 8.25:1 reduction anyways. Just a single ring gear and pinion gear.

Gonna go exercise it this morning. Got to have more fuel for Argos!

Exercise can be a dangerous thing… Was chunking some wood this morning and the motor shaft broke. It was only a 5/8" shaft. Finding a replacement motor with more hp and a beefier shaft, plus re-rigging the pulleys to fit, will take time… which I am out of. This may shoot my plans to bring the chunker to Argos this year. That is unfortunate Chris. Sorry to see that. Do you just have the weight of the motor as tension?

No, it was bolted down. I don’t think I overtightened it, but there was certainly some side load from the belt.

That’s a bummer. Now we know the limits of a 5/8 motor shaft. What hp and speed was that?? Here’s a replacement

Yep, that was a 2 hp 3400 RPM motor. Chunker is a little underpowered. I think Bill has the right idea with a five horse motor. Rather than put another two behind it, I think I’ll save my pennies and get a five horse.

Unfortunately, I don’t think this will happen in time for Argos. I’m still neck deep in this gasifier rebuild.

Bill, I’m counting on you to bring yours! Might want to give it a good shakedown run before you leave though… Stuff happens.

Perhaps use a pair of bearings in pillow blocks with the pulley driving the chunker between them. Then the electric motor driving the shaft would not see any side loads. Then you could use the same size motor you had before, without going to the 5 hp.

It will still slow down. The motor is simply running out of power before it can chunk all the wood that I want to throw at it.

the 5 hp motor will have plenty of beef in the shaft, and plenty of power to make the chunker go without slowing down. It’s the obvious solution. I just wish it didn’t cost 300+ dollars…

Chris, I know you like the quietness of an electric motor…but…wouldn’t this be a good excuse to mount a simple fire gas engine on it? In the city people spend 45 minutes pushing a lawn mower around their yards once a week. One can chunk a lot of wood in that time. Just a thought…

Howdy Chris,
I haven’t seen too many motors break shafts… From the pic it looks like that one was going to fail regardless of what you were running with it. I have seen axles that were cracked and run for a long time…
and just let go one day.
I think if you replace it with the motor Carl suggested… It would be fine for quite a while.
Buy ya some time til ya figure whatever way your gonna upgrade. (after Argos)
Good luck
TerryL