a simplified view from my research work here in Thailand… 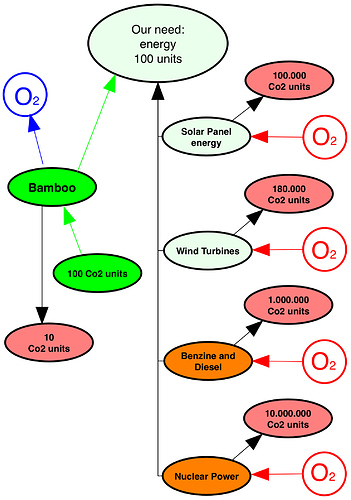 At the right side of the poster you’l see the amount of Co2 units to be consumed in the entire process, just to produce 100 units of energy. Also, those way’s to produce energy the depletion of oxygen is equal as the amount of Co2 produced.
This includes all energy spent in the entire process, including mining, building, transporting, recycling, refining…

Only the use of Biomass, to produce energy, actually releases O2 in the atmosphere and absorbs, reduces, the Co2 levels, converting the Co2 into the carbon in the biomass.

How did you get such a high CO2 number on nuklear?

Calculating all the fuel needed for digging up, transport, refining endlessly, all the residu’s, the landfill, the buildings, the storage, the equipment, the final storage of the used fuel… the list is endless…

Good job so far KVL.
I’d suggest adding BigHydro to the mix. High-high Co2 output loading making all of the concrete and having ran all of the diesel powered construction equipment for years in the making of the dams, fill basin stripping and such.

Any wondering: Big Central-out distribution systems like Nuke, Hydro, Coal/Natural gas turbines, Wind Turbine Farms have an additional high Co2 output loading having to make up all of the steels, coppers and such in the towers, trnasformers, Land strippings to make the extensive needed distribution systems.
Regards
Steve Unruh

I could not wait for the Hydro data, so i made this one already…

Since this is a similar topic l will just post the question here;
Which plant wuld you guys say is the best and most economical to grow for biomass in a colder region ( centrel europe)? l know Koen grows bamboo but that isnt an option here. Hemp might be one, or maybee poplar trees but has anyone got any other idea?
lt has come to a bit of a fasion here for people to burn corn in their pellet stoves. The prize of peletised wood of suitible quality is about 25c/kg, the prize of shelled corn is about 17c/kg so it is economical but in my opinion not very etical to burn food.

[quote=“KristijanL, post:7, topic:2574”]lt has come to a bit of a fasion here for people to burn corn in their pellet stoves. The prize of peletised wood of suitible quality is about 25c/kg, the prize of shelled corn is about 17c/kg so it is economical but in my opinion not very etical to burn food.
[/quote]

Our government turns our corn into ethanol alcohol and makes petrol companies mix it into the petrol (10%) for most of us to burn on the roads. >_<

To answer your question: hemp is good for a lot of things, but I don’t think that it’d be a very good biomass source for gasifying. It’s closer to grass than wood and one would need to burn a lot of energy pelletizing it, compared to using wood almost directly.

I saw an article that a properly managed acre (0.4 hectare) of hybrid poplar could supply enough firewood to wood heat a small house/cabin, year after year, whereas almost no other species came close to being able to do that.

The wood is much less dense, so you would need more volume, and thus larger storage areas and hoppers.

Hello Kristijan, the hybrid poplar or regular poplar grows well in colder climates and our goats love to eat the leaves. We cut the branches off through them into the goat pen, they strip them clean. We through them into a pile to dry and cut them up to make charcoal. The goat milk taste great.
Bob

How does charcoal made out of poplar perform in a gasifier? its a very light wood…

l am planing to cut down some black alder. Those are alsow great. Grows fast, a bit denser wood than poplar, and when you cut one down it shots new trees from the roots. The only downside is it only grows around watter so not good for planting it on dry land. Wonder if it gives good charcoal…

l have read romans grew laburnum (cant find english translation) for goats and sheep, supposed do be very high in protein. It alsow fixes nitrogen in the grownd (black alder does too).

Kristijan, I don’t know if it’s relevant but up here I would vote for birch. It’s denst and fairly easy to handle. It’s char doesn’t cruch and turn to fines.
Down by the river where I have most of my land there are also lots of alder. It’s bulky but grows twice as fast. Extremly easy to split and contains almost no tar. Burns with a clean flame from start but produces quite a lot of ash.

Ha, you were typing about alder at the same time I was…

Growing wise I’ve had the best luck with willow and Adler. So far no time to try charing it.

One of my adventures.

This Tree Is ? ? in Ask The Forester

Any idea what the name of this tree is? It grew fast. Faster than any tree around these parts. It's some what close to some trees my Gramps pl

I didn’t see anyone suggesting Box Elders. They grow like a weed around hear and are not used for lumber, but fire wood is fine. I could go look at the leaves on mine but I’m not any good at telling what a tree is— by leaves, bark, wood, or anything. TomC

“Acer negundo is a species of maple native to North America. Box elder, boxelder maple, ash-leaved maple, and maple ash are its most common names in the United States; in Britain and Ireland it is also known as ashleaf maple.”

I’d guess that, as a maple family, it’d work out pretty nicely.

These showed up in Mother Earth News article umpteen years ago.
http://www.frysvillefarms.com/hybrid-poplar-trees.php

Yes, Pepe, that’s the article I mentioned above. Thanks for finding it.

I think it is “Alnus glutinosa” a European species.

if my memory serves, its wood was wanted for forging and gunpowder!