Continuing the discussion from Pre-heating the Charcoal/feedstock with exhaust gasses:

Pre-heating the Charcoal/feedstock with exhaust gasses

I am still in the first experimenting phase here, i will need to find out the best way to “use” the exhaust gasses heat in the process.
I want to make a “simple” build and do the “tweaking” step by step in de sub sequential learning process.

I need to ad / mix the extra heat needed and learn how to do that the most efficient way.
The pulse effect from the exhaust might be helpful to keep the charcoal “stirred up” either with positive or negative results.

So my first approach is, to make a “mixer” for the exhaust / HHO and connect that with the reactor.
The HHO will reach 2900°C, need to bring it down to 1300°C or below ashmelting temperature at all times 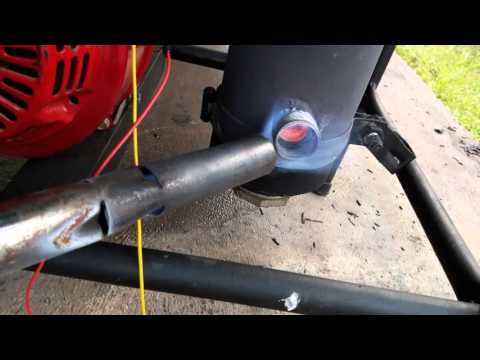 Blowing the heat from the flame in the ignition port to see what effect it has on the glow…
For small engines , as i use, the turn down ratio is important to avoid a huge lag after decelarating
I am thinking about an loop system, combined with ignited gas , to keep 6the flow and temperature in the core at a constant level.
This also can replace the HHO i was using in the first setup.
Only at cold startup may need the HHO for starting…
Building a first pre-combusting chamber now…

The reason why i do all this

My original work is developing “big” systems.
The requirements are to use at least 70% of the input energy ( mandatory) or not getting your permission to build/operate

Now i build small… and even here those requirements , or at least the questions about them, arise…

So, since my heart is in gasification, and i love all kind of builds, i devote my time in what i love to do…
Learning and having a good time in life…

To all my readers;
Thank you for your feedback

I’ve read this thread and the root thread that preceeded it. I have questions about the “cost” of the 400 watts that produces the HHO. I also question how you avoid explosions at such a low flow rate? HHO is not rated explosive. It is rated “concussive”. i have cells up to 11 gallons. It can be incredibly hard to control.
I also read the disparaging comment on Paul Pantone. It might interest you to know that M.I.T. stole his invention and is marketing a “plasma Reformer”. https://www.youtube.com/watch?v=uUNoQLzj00E
Pantone’s work merits deep study reagrdless of results. As mentioned here, HHO can be an amazing catalyst.
There is always the possibility that a plasma reformer would have an application to a wood gas unit. Pantone’s work seems to be especially popular in France.
"Exhaust Heat Utilisation Device(EHUD). " http://www.traffic-made-easy.com/blog/article-marketing/pantone-magnetic-plasma-fuel-reactor-engine-geetspadfrench

The energy used to produce the HHO before was charger generated , can be deducted from the output of the generator if you wish.
Its all about having fun with experimenting and turning theory into practical…

I don’t understand why people keep bringing the “old news” on Pantone, but, without being disparaging, build one and show that it works and put that in one different thread, please… don’t create deja vu’s… i have seen them enough.

HHO is indeed a “fun” product to work with, and its all about how you work with it…
Small amounts, well dosed and handled with care is as much risk as cooking your meal on a C4 cooking stove…

To topic:
use your lost exhaust energy, the simple way

So far it seems to work just fine… every time…

No, its only gas from the gasifier itself, its an experiment to see what ever happens.

I want to try a “loop” with an continious flow in the gasifier, so an burning chamber in front of the ignition port.
Where as the gas gets burned and re-injected the heat into the gasifier if the engine throttles down…
A kind of improving the turndownratio or enhancing the low rpm gas quality…

Hi Koen
The gas draf would not be obtained by the engine?
The gas draf would be constant and independent of rpm?
It will require a chimney exhaust gas non proces by the gasifier?
I am very curious to know what effect it will produce on coal consumption?
Thierry

Hi Thierry,
The gas would be in an open loop if the engine is not or little demanding
I intend to install a vacuum switch on the blower so the gas will be circulating at a constant speed, even if the engine is taking only little.
The excess gas wil be fed back into the reaction zone after been ignited if needed. ( PID controller on ignition)
This experiment could learn me more about maintaining a constant gas quality for the changing loads on a small engine.